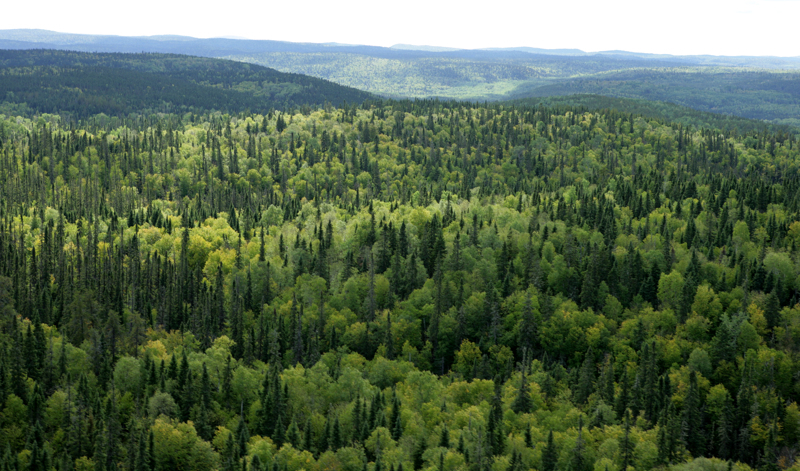 Resolute Forest Products sued Greenpeace for defamation in 2013 in relation to allegations the organization made about Resolute's logging operations. Photo by Greenpeace
Previous story
Next story

A panel of Ontario judges has tossed out an attempt by Resolute Forest Products to expand a $7 million libel suit against environmental organization Greenpeace.

The judges upheld an earlier ruling that tossed out an attempt by the forestry giant to expand the lawsuit to include many of Greenpeace's past statements and actions, which the court ruled would have turned the libel lawsuit into "an inquiry into the entire Greenpeace movement."

The judges made their decision on Feb. 21, but details were only released on Friday by Greenpeace Canada. The lawsuit itself is ongoing.

Resolute has operations in Ontario, Quebec and the United States and is one of Canada’s largest forestry companies. It is suing Greenpeace Canada for defamation in relation to allegations that the company was logging in off-limits parts of the boreal forest in Quebec. The decision upholds an Ontario Superior Court ruling from last fall that shut down a request by the company to expand the scope of the lawsuit to include past statements and actions from Greenpeace chapters around the world.

In the decision last fall, the Ontario Superior Court dismissed Resolute’s argument, ruling that it would “greatly expand the scope of the litigation and transform the trial into an inquiry into Greenpeace.” Resolute’s lawyers had argued that Greenpeace has a history of “sensationalizing or misrepresenting the truth,” and of breaking the law in environmental protests.

In the earlier decision, the Ontario Superior Court judge concluded that Resolute had not provided “a single example” to prove the allegations, and that they “had almost nothing to do with” the defamation allegations at issue in the lawsuit.

Greenpeace’s forest campaign head Shane Moffatt said in a statement that Greenpeace “will continue to stand by our critique of Resolute’s forestry practices as sound opinion based on reliable scientific evidence.”

Resolute has also recently been in a dispute with an organization that manages a sustainable certification system for forestry companies - the Forest Stewardship Council - which threatened to expel it from being certified.

The latest appeal court decision allows Resolute’s lawsuit against Greenpeace to continue, but largely limits the scope to the original Greenpeace statements that Resolute says are defamatory.

“This in no way changes the basis for our case against Greenpeace,” Resolute spokesman Seth Kursman said in an email. “We have a moral and ethical responsibility to hold them accountable for their irresponsible and illegal campaign of misinformation.”

Kursman said Greenpeace has “not only caused economic harm to Resolute but also have directly impacted our customers, employees, First Nations partners, unions, small business owners and countless others in the communities in which we operate.”

Resolute sued Greenpeace Canada in 2013 in relation to a report the environmental organization published on the company's logging activities.

Resolute’s lawyers are also claiming that Greenpeace tried to intimidate the company’s clients and convince them to stop doing business with the company.

Resolute is also suing Greenpeace in the United States for $300 million under American racketeering laws, which were originally designed to target criminal organizations.

Greenpeace has claimed that the Ontario libel lawsuit, which asks for $7 million in damages, is part of a pattern of lawsuits intended to silence critics of the company.

Moffatt told National Observer that Greenpeace was concerned about the “chilling effect” the lawsuit and others like it could have on public debate. “The next time an environmental advocate or community group is considering speaking out on an important public interest issue, are they going to think twice, and is that the consequence of these kind of lawsuits?” he asked.

Resolute’s lawsuit was filed before Ontario introduced legislation in 2015 intended to curb so-called strategic lawsuits against public participation, or SLAPP lawsuits. Quebec has had anti-SLAPP legislation since 2009.

“I can imagine it would be very difficult for local community organizations or individuals or other NGOs to deal with this kind of, in our opinion, a SLAPP lawsuit that moves the debate from the public sphere to the courtroom,” Moffatt said.

Responding to the SLAPP allegations, Resolute spokesman Kursman said that "free speech doesn't mean you have the right to libel and slander. Malicious lies that malign and defame are not protected.”

He said that Resolute filed the lawsuit in Ontario because it has extensive logging operations there, and because it was at the company's annual general meeting in Thunder Bay, Ont. that Greenpeace distributed a "terribly inaccurate and deceptive" report on Resolute's operations, which included some of the statements Resolute has alleged are defamatory.