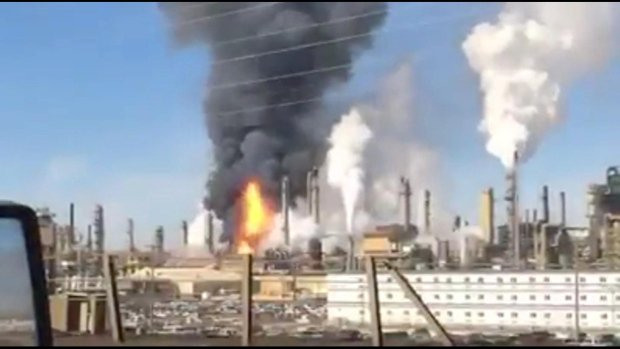 Emergency crews were deployed to the Syncrude oilsands plant on March 14, 2017 after a fire broke out. Screenshot from CBC News
Previous story

Syncrude Canada emergency crews and RCMP are responding to an explosion and fire at an upgrader at one of the company's oilsands sites near Fort McMurray in northern Alberta.

There was a big plume of black smoke at the Mildred Lake upgrader complex Tuesday afternoon but the smoke was dissipating, said Will Gibson, a Syncrude Canada spokesman.

"Our concern right know is with ensuring the fire is contained and extinguished and people are safe," Gibson said from the site.

There was no immediate reports of any injuries.

Gibson said the fire broke out shortly before 2 p.m. and the company's fire crews began fighting the flames.

He said access to the site has been restricted and workers are leaving the area.

Syncrude employs about 4,600 people in the region. There was no word on how many people were working at the site when the fire broke out.

RCMP said they responded to the scene of an explosion but Mounties had no information on the cause.

Traffic on Highway 63, the main road to the site — was moving slowly as workers left the area.

"Police are assisting with the evacuation of non-essential services from the Syncrude oil site," RCMP said in a release. "Please do not attempt to enter the Syncrude site or stop off the road on Highway 63."

Nearby Fort McKay First Nation urged residents to remain indoors and keep their windows and doors closed due to prevailing winds.

Melissa Blake, mayor of the Municipality of Wood Buffalo, urged people not to jump to conclusions.

"Anxiety high for those waiting for friends and family to connect," she said on Twitter. "Don't let rumours run the social media mill. Facts will come when they can."

Another fire at the Mildred Lake site in August 2015 cut output from the facility by about 80 per cent. The fire damaged pipes, power and communications lines between two units of the upgrader.

It returned to normal production the following October.