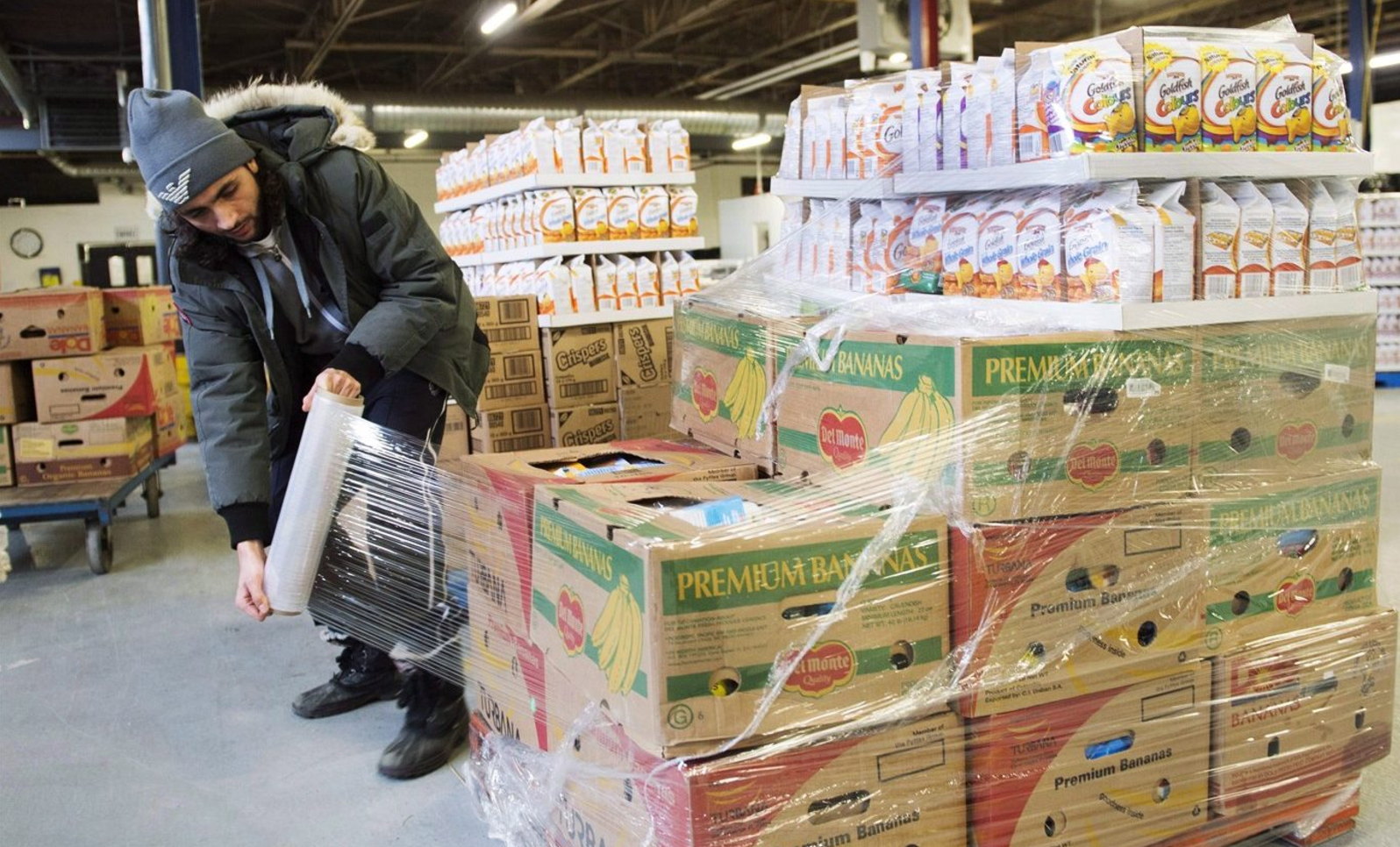 Artem Mousessian wraps a shipment at the distribution centre for Moisson Montreal, the largest food bank in Canada, on Jan. 28, 2016 in Montreal. File photo by The Canadian Press
Previous story

Quebec food banks and some of the province’s grocery stores are teaming up to ensure that perfectly edible food will end up in the hands of those who need it most and not at local landfills.

The supermarket recovery program is being dubbed the first of its kind in Canada and follows a pilot project launched a few years ago in Montreal and Quebec City which yielded promising results.

"It means a better quality of food (at food banks) and a consistent supply," said Annie Gauvin, executive director of Food Banks of Quebec, which deals with the 30 wholesale food banks across the province.

The program would see those regional banks picking up items and distributing them to local organizations. A pilot project that involved 177 supermarkets was able to recover 2.5 million kilograms of food, including 500,000 kilograms of meat.

"People give a lot during the holidays, during food drives and at different times of the year," said Gauvin. "But there are times of the year, when the shelves are empty, when it’s harder to distribute, but the supermarket program will mean weekly deliveries to regional food banks, all year long."

In the next year, 175 more stores will be added to the initial 177, with the ultimate goal of having 611 stores participating in three years — a number that represents nearly two−thirds of Quebec grocery stores.

The ultimate goal is to recoup up to eight million kilograms of food each year, reduce food waste and help the environment by saving the equivalent of 7,000 tonnes of greenhouse gases yearly. The province says that is the equivalent of taking about 1,500 cars off the road.

Quebec has kicked in a one−time grant of just under $400,000, which will help regional food banks offset logistical costs like freezers and transportation. The national organization of food banks says a one−size−fits−all scenario is unlikely to work all across the country, partly because of available infrastructure and partly because of geography.

While Quebec has centralized food banks, other provinces have smaller organizations that go directly to the retailer to pick up surplus food.

"Every province is structured a little bit differently," said Marzena Gersho, Food Banks Canada’s communications director. "It’s dependent on the province, it’s dependent on how they want to structure picking it up but certainly there have been long−term relationships between grocery stores and local food banks for a number of years."

As food banks grapple with increased demand, the chief executive officer of the Welcome Hall Mission, a large retail food bank in Quebec, said the provincial project offers some relief.

"It takes political will for a group of people with diverse interests but who all have a heart for doing the right thing," said Sam Watts. "It’s allowing us to recuperate huge quantities of food that would otherwise be lost and thrown away, and put into dumps and create greenhouse gases."

He says the food waste at his own operation is less than one per cent.

"The fascinating thing is that there is actually enough food to feed everybody and there’s enough surplus food to feed every Canadian, every Quebecer, every Montrealer," said Watts. "The only problem is distribution and management."