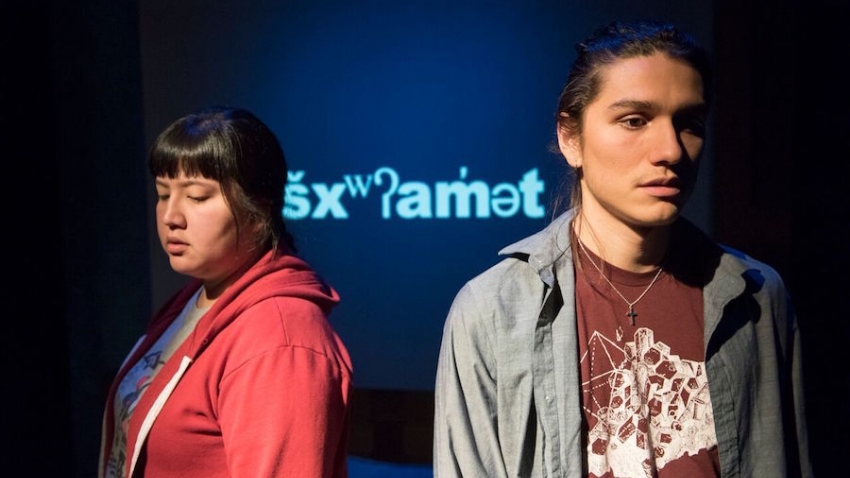 Can we redo history until we get it right? Photo: David Cooper.
Previous story
Next story

Galvanized around First Nations’ leadership role in the Kinder Morgan pipeline fight, a pair of edgy theatre offerings this month confronted Vancouver audiences with the intertwined issues of indigenous rights and environmental justice.

At Richmond’s Gateway Theatre, two production companies – Itsazoo and Savage Society – teamed up to stage a one hour remouillage of Vancouver Observer’s own book-length reportorial compilation, Extract: The Pipeline Wars.

And at the Firehall, David Diamond’s Theatre for Living mounted šxʷʔam̓ət (home), an earnestly provocative psychodrama probing the prospects and pitfalls of Truth and Reconciliation between Canada’s First Nations and the rest of us.

Although it’s been three years in the making, The Pipeline Project retains its up-to-the-minute newsiness with an opening montage of ghoulish Trump footage and headlines denouncing the Trudeau government’s environmental back-pedaling.

Nevertheless, it unremittingly reminds us that this is theatre, not “real life.”

Its three actor/authors – Quelemia Sparrow, a Musqueam activist and self-confessed upper middleclass fashionista; Kevin Loring, who SUV-shuttles between Vancouver stage/screen gigs and the inland N’lakap’amux rez where he was raised; and Sebastien Archibald, an avowed white, male “asshole,” despite his crunchy commitment to environmental and social justice causes – deploy a panoply of self-consciously “stagey” devices.

They buttonhole us with confessional monologues. They depict “meta” scenes of the show’s brainstorming workshops. They circle each other with video cameras for live, real-time telecast on overhead screens. They keep running tallies of the CO2 cost of their own lifestyle choices.

Even Sparrow’s mother – a tart-tongued, chain-smoking Native Land Claims lawyer – puts in a cameo appearance (in the form of a sock puppet) to informatively annotate some historic background.

All this is delivered with technical panache, thanks to a top-flight creative team. Projection wizard Conor Moore serves up a steady stream of video clips that ripple across the textured side screens and even the floor of Lauchlin Johnston’s theatre-in-the-round stage set.

Coordinating all these elements seamlessly, director Chelsea Haberlin also moderates The Pipeline Project’s follow-on “Talk Forward” discussions. After each performance, audience members get a chance to debrief in a Q&A with one of 11 selected environmental activists.

Still, for all the fancy stagecraft, the production draws its punch mainly from the honesty and urgency of the script. Now and then the actors role-play ancillary characters: historic First Nation icons, mealy-mouthed corporate or NEB flak-catchers, irate ranchers in the pipelines’ path.

There’s a tense tick-tock to recap Enbridge’s cataclysmic 2010 Kalamazoo oil-spew. But most of the dialogue is first-person, in the author/actors’ own voices, ranging from self-deprecatory humour to scathing put-downs to rueful introspection.

The zigzag changes of tone, lack of narrative thread and in-your-face artifice of the production keep us from getting too caught up in the onstage action.

That, I suspect, is not a bug but a feature; the “alienation” or “distancing” effect that is a hallmark of Agitpropmeister Bertholt Brecht’s dialectical theatre.

The object is not to enlist empathy, but rather to get the audience to think critically, as a spur to ongoing social and political action.

Stripped of its theatrical integument, the didactic payload of The Pipeline Project seems to boil down to five key points:

Šxʷʔam̓ət (home) touches on many of the same themes, but takes an almost opposite dramaturgical tack, more akin to “natural theatre” guru Konstantin Stanislavski’s eponymous “acting system.” This approach prescribes total immersion in your character’s identity and circumstance, extending past-and-future far beyond the present scene onstage.

This allows Theatre for Living Artistic Director David Diamond and his seven-member cast to tackle the prospects and pitfalls of Truth and Reconciliation with a kind of experimental method.

Hardly a classic empirical experiment (since history is unreplicable and lacks any alternative reality “control group.”) Nor is it an abstractly rational thought experiment. Nor yet a lucid dreaming exercise, like a Native American vision quest. Nor is it exactly a moral experiment or even a Ghandian “Experiment with Truth.”

Rather, Šxʷʔam̓ət combines elements of all these methodologies, but in its own improvisatory, ad hoc style. And – throwing Heisenbergian caution to the winds – these investigators expressly set out to pull us, the audience/observers, into their onstage experiment.

Canvassed by Terbasket and a Filipina classmate (Mutya Macatumpag) in a Kinder Morgan campus petition drive, Koostachin can’t quite “get” how First Nation land claims trump any corporate cost-benefit calculus.

Chalking it up to his foster home upbringing, Terbasket hands him her “medicine” amulet to raise his native consciousness. But back at home, his adoptive mother appropriates the talisman.

And then all these well-meaning people somehow get crosswise with each other. The boy blames his parents for keeping him in the dark. They, in turn, dread losing a loved child.

On his buddy’s recommendation, the adoptive father hires the protégé for day labour, but then sacks him on a racist presumption of incorrigible negligence. The protégé spurn his mentor’s bid for reconciliation and sinks back into drink.

The Filipina classmate resents her eco-warrior comrade’s evident favouritism, on purely ethnic grounds, towards a clueless passerby versus an ideologically committed fellow traveller.

At his daughter’s goading, the assimilationist survivor tentatively breaches old traumas, only to snap back into his customary reserve. But his rapport with his erstwhile buddy seems lastingly compromised.

And there the playlet ends, at least on its first iteration, with everything left hanging and bad blood all around. But Diamond’s experiment is just beginning. Now the cast recaps the script, scene by scene, with anyone in the audience invited to stop the action at any point and step into any of the roles for an improvisatory alternative denouement.

Then, under the new premises, the other actors, with their Stanislavskian priming, play out the scene in character until Diamond calls a halt. Whereupon everyone onstage has to either voice or mime their unspoken inner thoughts.

And then we move on to the next scene. Some of the interventions were implausibly anodyne, the day we took in the show; some were offbeat and inspired.

Ideas came from startling quarters. A hipster girl with jangling piercings and parti-coloured coiffure humanized the role of the middle-aged white boss man to keep his precarious hireling on the wagon. A First Nations matron, in the role of the Filipina fellow-traveller, made the case for a more inclusive activism.

A wispy white beardnik stepped into the shoes of the burly Residential School survivor to force a conciliatory dinner between the two estranged families (much to the flaming rage of his own daughter, as it turned out, who felt slighted that he should casually reveal to white strangers what she’d struggled so long to pry out of him).

The exercise proved so compelling that audience members lingered in the Firehall lobby long after the show, until ushers had to urge us out into a driving rain on the unceded territories of the Musqueam, Salish and Tsleil-waututh Nations.