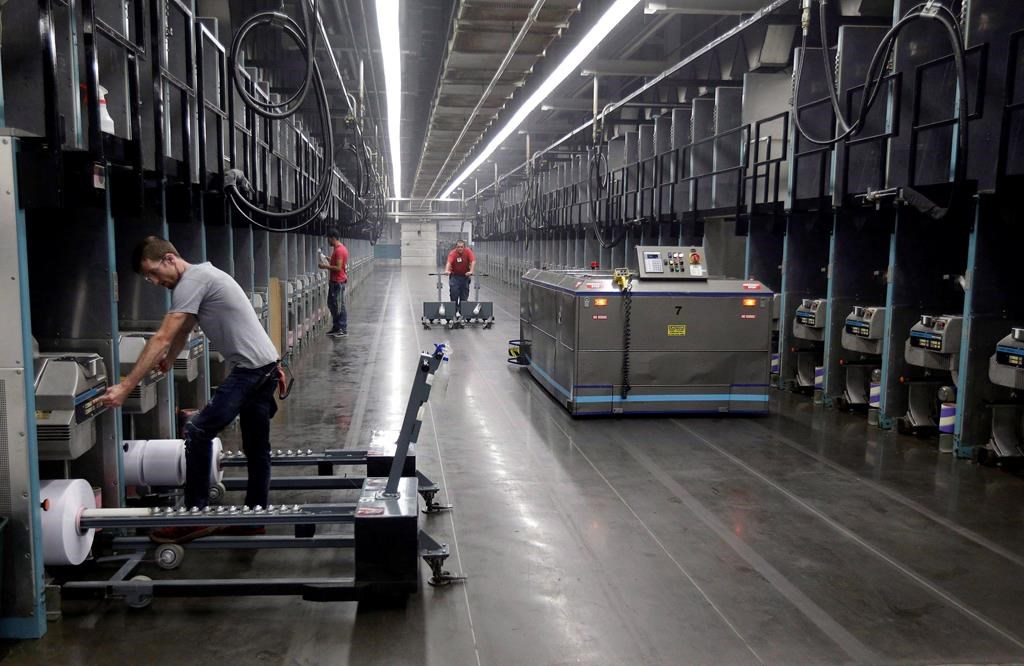 Workers and robots labour side-by-side with plastic thread made from recycled bottles at the Repreve Bottle Processing Center, part of the Unifi textile company in Yadkinville, N.C., on October 21, 2016. File photo by The Canadian Press
Previous story

Next week's Canadian federal budget will raise concern about workers being displaced en masse by new technologies. It's arguably an under-told story of the last U.S. election — people often talked about Ohio and Pennsylvania's coal miners and steel workers, less so about technologies pushing them aside: automated steel production, and the 3D underground imaging finding cheaper natural gas.

It's a concern as old as policy-making itself.

The very first book of Aristotle's ''Politics'' warned that if shuttles could weave and harps could pluck themselves, labourers and slaves would be obsolete. When the inventor of the knitting machine came asking Queen Elizabeth for a patent in 1589, she saw a political problem.

''Consider thou what the invention could do to my poor subjects,'' she said, rejecting William Lee's request. ''It would assuredly bring to them ruin by depriving them of employment, thus making them beggars.''

The Luddites smashed textile machines a couple of centuries later. The worries carried into the digital age. In his final Sunday sermon, Martin Luther King referred to a memorandum sent to President Lyndon Johnson on the risks of so-called cybernation.

Economists might appreciate that King found solace in the truism that has forever sustained human-based employment: ''Whenever anything new comes into history,'' he said, ''it brings with it new challenges and new opportunities.''

But what if this time really is different?

Voices in Silicon Valley and academia see a snowball effect of technology getting stronger, faster and — unlike the spinning wheel and assembly line — programmed to constantly improve itself as it rolls over one human task after another.

A study at Oxford University in 2013 concluded that 47 per cent of jobs risk being computerized. That includes blue-collar and white-collar jobs. A more nuanced conclusion comes in a recent McKinsey study: that few careers will be completely eliminated by mid-century, but 60 per cent of human tasks will.

The coming change could be as dramatic as the shift from an agriculture-based economy — at a far faster speed, says a well-known Silicon Valley entrepreneur, author, and now semi-retired lecturer on the societal effects of artificial intelligence at Stanford University.

''These developments are likely to usher in a new age of unprecedented prosperity and leisure, but the transition may be protracted and brutal,'' Jerry Kaplan writes in his book ''Humans Need Not Apply.''

''We may be in for an extended period of social turmoil. The warning signs are everywhere... If these are left unchecked, we may witness the spectacle of widespread poverty against a backdrop of escalating comfort and wealth.''

One example of wealth without workers comes in Martin Ford's book ''Rise of the Robots.'' He notes the decades-long decline in U.S. labour-force participation. And he points to Google turning a bigger profit in 2012 than General Motors at its 1979 peak, in inflation-adjusted dollars — with just 4.5 per cent of the workers.

Bill Gates is so worried he wants to tax robots. The revenues would go to displaced workers. The costs would be a temporary disincentive for companies to automate, slowing the pace of change and giving humans some time to plan.

The biggest disruption could be driverless vehicles.

Yet they will obliterate millions of livelihoods in the U.S. alone, he says.

Long-haul trucking could be first. Mining giant Rio Tinto has bragged about the performance of its self-driving trucks at Australian test sites. It won't be as easy for urban transport, but companies are already working to lobby governments for regulations friendly to self-driving cars.

Uber is testing autonomous vehicles — which could replace its drivers, who have just disrupted taxi drivers.

One auto executive said in a chat with The Canadian Press that fully autonomous vehicles were 10 years away. When asked what might happen to millions of truck drivers, the executive replied that it's a hard job — they will find something better.

Policy-makers aren't all so confident.

Finance Minister Bill Morneau tasked an advisory council to study issues like this. It's unclear how many of its suggestions will wind up in next week's budget, or future ones. It proposed creating a partnership called FutureSkills — uniting governments, companies, and unions to share data on labour trends, and co-operate in skills training.

Obama's senior adviser for innovation and manufacturing policy says the textile hub is working on smart fabrics — like hospital gowns that monitor vital signs and could alert the doctor in an emergency, or military gear that tracks injured soldiers.

"Maybe the cutting and selling (of clothes) won't come back to the U.S. completely,'' Vikrum Aiyer said.

''But where the U.S. could have a competitive advantage is... around smart fabrics."

Singapore offers $500 grants to everyone over 25 for training. An Australian panel recommends preparing young people for multiple careers — instead of getting skills for just one job, they learn about several related ones.

He calls it a job mortgage.

The same way you can sign a contract for a house, he believes a laid-off worker should be able to sign a company contract that guarantees a job following some training; take it to the bank and request a loan covering the transition costs; and get tailor-made training, designed by the industry and offered by a private education startup.

There could be jurisdictional challenges.

In Canada, the feds write banking regulations, while the provinces handle both education and job certification. But these different governments might like one thing, which Kaplan points out in an interview: ''It doesn't require government money."