'Why have Nunavut?' Battle over education bill goes to heart of territory 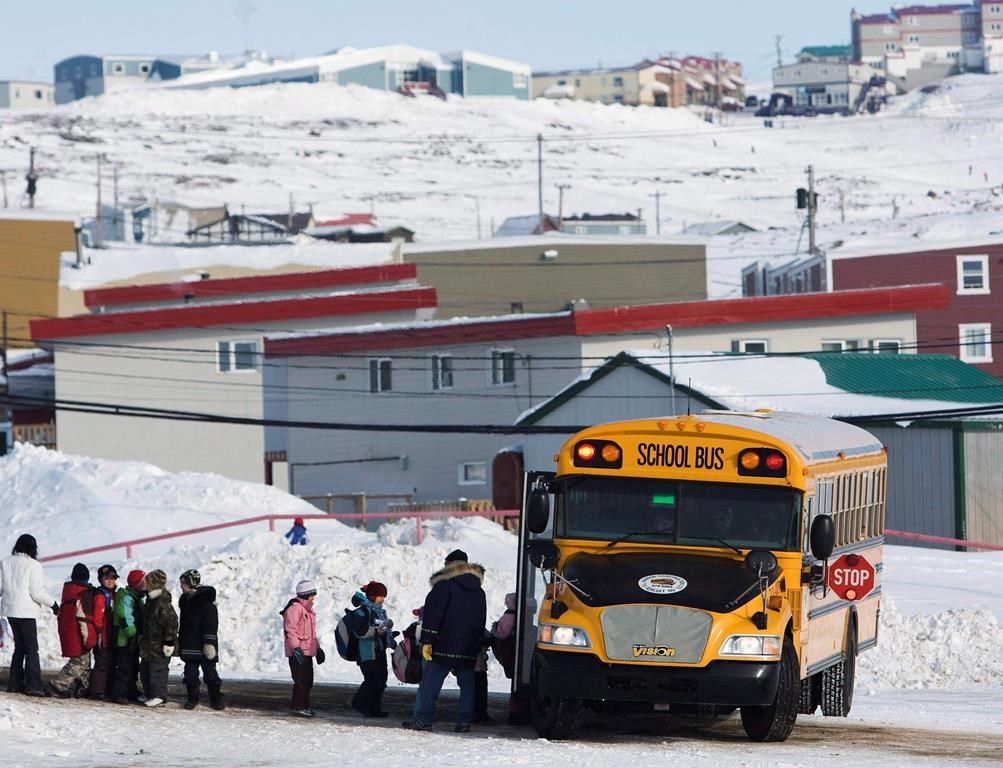 Students board a school bus at the Nakasuk Elementary School in Iqaluit, Nunavut, on March 30, 2009. File photo by The Canadian Press
Previous story
Next story

To the Nunavut government, it's an update to old legislation that needs to acknowledge reality. To others, it's a dagger to the territory's heart.

"Why have Nunavut?" asks Sandra Inutiq, the territory's former language commissioner. "Why have we created the territory if we're not going to protect Inuit rights?"

Her anger is over proposed changes to the Education Act, passed in 2008, that promises all Inuit children guaranteed access to bilingual education by 2019 so as to produce graduates equally fluent in Inuktut and English.

Inuktut refers to all languages spoken by Inuit, including the Inuktitut dialect spoken on Baffin Island.

Amendments to the act that have been tabled in the legislature would delay that promise by 10 years for students up to Grade 9 and indefinitely for high schoolers.

"We grossly overestimated our ability to implement some of the provisions of the Act," says Kathy Okpik, deputy minister of education.

That angers those who see schools as a major bulwark of Inuit language and culture.

"It goes against what was the vision and motivation to create Nunavut," says Aluki Kotierk, president of Nunavut Tunngavik Inc., which monitors the Inuit land claim.

"People envisioned we would be able to receive all public services in Inuktut."

The government's move comes amidst increasing fears about Inuktut's future.

Ian Martin, a York University professor with long involvement in Nunavut, says English is probably the language in most Nunavut homes now. He says present trends suggest Inuktut will be spoken in fewer than one in 20 homes by 2051.

Most students up to Grade 3 are taught in Inuktut. Later grades use both English and Inuktut, but English gradually becomes predominant.

Classroom materials in Inuktut are hard to come by and are often produced by teachers themselves.

The current teaching model has resulted in what Statistics Canada has said is a 65 per cent dropout rate and students, according to other studies, who are comfortable in neither language.

Teaching students in a tongue other than the one they speak at home is tough on kids, says Paul Berger, a Lakehead University professor who has taught in Nunavut.

"That transition is extremely difficult for students academically," he says. "Researchers talk about it taking six or seven years to catch up in the best of circumstances."

Berger is one of 16 academics from across the country who have written to the government of Nunavut to protest the proposed changes.

Many experts suggest a truly bilingual program that teaches students in the language they use at home would get better results.

Nunavut is doing its best to produce its own teachers and curriculum materials with the resources it has, says Okpik.

In the last three years, 300 books in Inuktitut have been published along with classroom aids such as Inuktitut phonics. Many support workers in school speak Inuktut and 189 Inuit teachers have graduated since the creation of Nunavut in 1999.

But Berger points out that at that rate, it'll be 2051 before Nunavut schools are staffed with Inuktut-speaking teachers.

"Our biggest challenge is the number of Inuktut-speaking educators," Okpik acknowledges.

Don't blame a lack of money, said Kotierk. Her group has offered the territorial government $50 million from the settlement of a lawsuit with the federal government to kickstart teacher training.

She blames a succession of territorial governments for failing to do anything to produce enough teachers to fulfil the promise of the original Education Act.

"The government of Nunavut, particularly the Department of Education, is so good at placing blame on Inuit. The government should be more proactive."

The territory is seeking public comment on the bill before it goes to a final vote. Approval, says Inutiq, would be a betrayal of everything Nunavut was supposed to be.

"We're just continuing on that neo-colonial idea if we give up on our language."