By Bruce Livesey | News, Energy, Politics | March 24th 2017
For subscribers
#7 of 8 articles from the Special Report: House of Irving 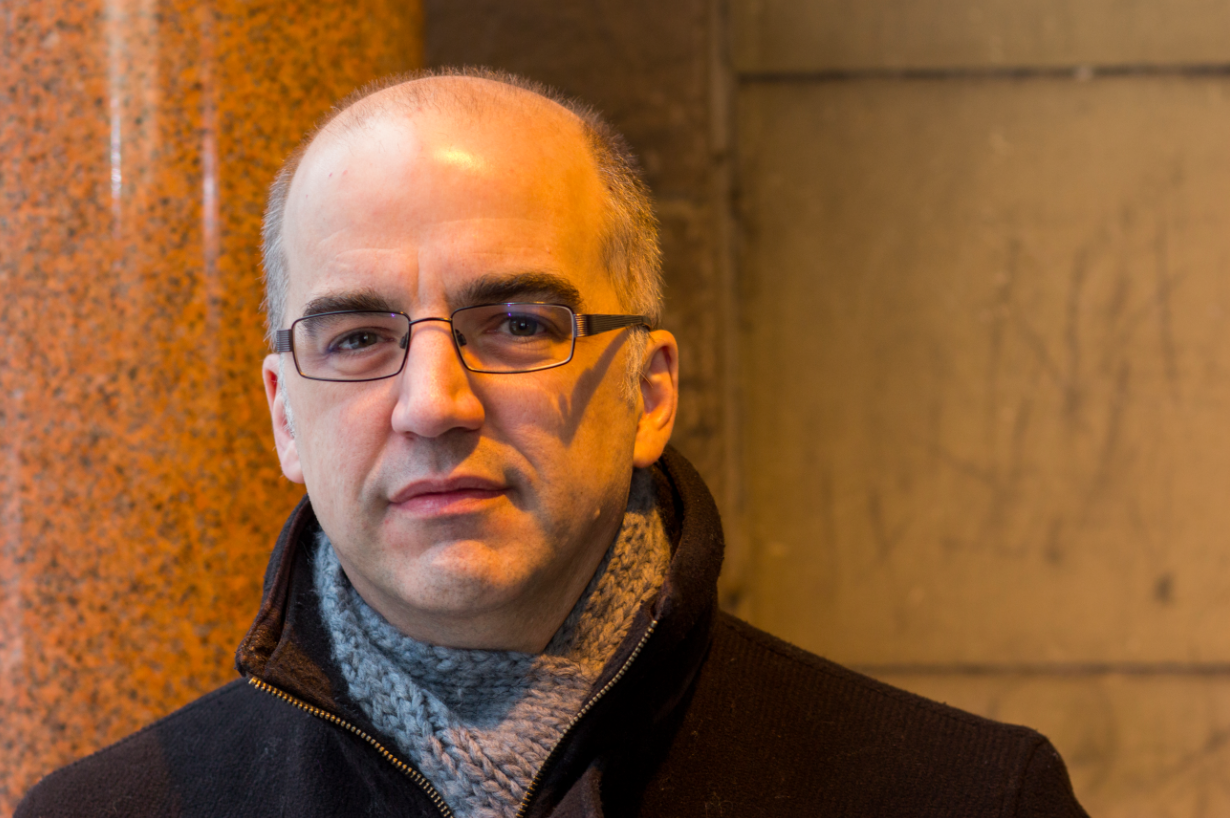 CBC reporter and author Jacques Poitras. In 2016, J.D. Irving lodged a complaint against Poitras with the CBC ombudsman, demanding that the reporter be banned from writing about the Irving family and their operations. Photo by Matt Carter
Previous story
Next story

Why are the Irvings trying to muzzle Jacques Poitras?

The Irvings are Canada’s seventh-richest family, sitting on a fortune worth more than $10 billion, with their companies dominating the economic and political life of New Brunswick. The power and reach of this family dynasty is legendary. Members of the Irving family also own most of the media in New Brunswick, including the three daily English language newspapers, 18 community papers and four radio stations.

Poitras, meanwhile, has been the CBC’s provincial affairs reporter in Fredericton for 17 years, covering the New Brunswick legislature. He used to work for the Irvings’ most important daily newspaper, the Telegraph-Journal, prior to joining the CBC.

Last year, a complaint against Poitras was lodged with the CBC ombudsman by J.D. Irving, Ltd., the forestry, shipbuilding, transportation and media conglomerate owned by James K. (J.K.) Irving, one of Canada’s richest billionaires, a man whose fortune is valued at US$7.2 billion.

The complaint demanded the CBC ban the reporter from writing about the Irving family and their operations. J.K. owns Brunswick News Inc. (BNI), the company that runs his media holdings in New Brunswick and that is overseen by his grandson, Jamie Irving.

J.D. Irving complained that Poitras is biased against the Irvings, pointing to the contents of the reporter’s two Twitter accounts – one for his job with the CBC, and the other his own account, which he uses to promote his books.

Poitras is the author of four books, and is currently researching another one on the Energy East pipeline – an Irving-backed proposal to carry oil from Alberta to Saint John, N.B., where Irving Oil’s refinery is located. The complaint suggests that Poitras upset the Irvings because of his bestseller, “Irving vs. Irving,” subtitled “Canada’s Feuding Billionaires and the Stories They Won’t Tell,” that was published by Penguin in 2014.

The book details the recent history of the Irvings’ media holdings, as well as the deteriorating relationship among the Irving brothers and cousins as they squabble over the empire’s wealth and future direction. It brought to light never-before-told stories about one of Canada’s richest, most secretive and under-reported families. The book was well reviewed and nominated for a National Business Book Award.

“Everything I have seen of Jacques’ reporting on the Irvings has been, from my point of view, exemplary journalism – well-researched, interesting and fair,” remarks Kelly Toughill, director of the journalism school at the University of King’s College in Halifax and a former deputy executive editor of the Toronto Star.

In his job as the CBC’s provincial affairs reporter in Fredericton, Poitras occasionally covers the Irvings and the impact of New Brunswick government policy on them.

J.D. Irving was unhappy about Poitras tweeting from his CBC account and his personal account on matters to do with the Irvings. The company's first complaint to the ombudsman last year was reviewed by Jack Nagler, the CBC's director of journalistic accountability and engagement. After examining Poitras’ reporting and tweets and references, Nagler concluded J.D. Irving’s complaint had no merit, and Poitras would not be prevented from writing about the Irvings.

But last month, J.D. Irving re-submitted its complaint, this time to be investigated by Esther Enkin, the CBC ombudsman. Written by a Lenczner Slaght lawyer, William McDowell, the complaint claimed that Poitras was a “relentless critic of (J.D. Irving) and other Irving interests” – such as BNI – and that “He occasionally uses offensive language.” One example cited was when someone tweeted to Poitras and referred to the Telegraph-Journal, the J.D. Irving-owned newspaper, as “TU”. When Poitras asked the reader what he meant by “TU”, he was told it was “Telegraph-Urinal." When Poitras reproduced the reader’s tweet, he changed the reference line from “TU” to “TJ”. When another reader asked why he made the change, Poitras said, “Wanted to make sure my readers got the reference” – meaning that people understood the first tweeter was referring to the Telegraph-Journal. J.D. Irving, however, felt this was “highly offensive and unworthy of a CBC journalist."

CBC ombudsman rejects Irving request, saying it "would amount to a form of censorship"

Last week, Enkin released the results of her investigation, and once again dismissed J.D. Irving’s complaint. She noted that “the number of stories Mr. Poitras has produced for CBC that focus on Irving companies or activity is limited. In the last six months, there have been stories about government policy regarding the forestry industry, but he did not single out Irving companies. His work conforms to CBC journalistic standards and practices and it is not reasonable to say he cannot report on Irving-related issues.” In regards to the tweets about the Telegraph-Journal, Poitras told Enkin that he genuinely did not know what the tweeter was referring to when he used the term “TU” – and changed it because he “thought other followers might be confused” as well.

Enkin said that telling Poitras to not write about the Irvings or cease using his non-CBC Twitter account “would amount to a form of censorship.”

This is not the first time J.D. Irving has taken a run at Poitras. In December of 2015, he wrote a story about the mysterious removal of Dr. Eilish Cleary, the province's chief medical officer of health. In the story, Poitras noted that at the time the New Brunswick government put Cleary on leave, she was working on a study about the health impacts of glyphosates – the most popular and controversial herbicide used in the forestry industry. In passing, Poitras mentioned in his story the herbicide “is used in New Brunswick by forestry company J.D. Irving Ltd. and by NB Power.”

Despite this being the only reference to J.D. Irving in the story, the company’s vice-president of communications, Mary Keith, printed a statement on the company’s website calling the Poitras item “a sensational story insinuating a connection between the sudden leave of absence of Dr. Eilish Cleary... a study of glyphosate, and two companies in New Brunswick. CBC presented an unsubstantiated conspiracy theory as fact. The story falsely implied that J.D. Irving... is or was involved in some sort of conspiracy against Dr. Cleary because J.D. Irving uses glyphosate. CBC perpetuated this conspiracy theory by only broadcasting the innuendo and allegation... CBC’s conduct is completely unprofessional and inappropriate.” Keith demanded the entire story be removed, which the CBC refused to do.

Stephen Kimber is a Halifax-based author, columnist and journalism professor who has examined J.D. Irving’s complaint about Poitras to the CBC ombudsman— and finds it alarming. “What we have here is a big company that is using its Toronto corporate lawyers to put pressure on a media organization with what I see as no basis in fact,” he remarks. “I don’t think they have any legal leg to stand on, and I don’t think they do either. I think they just simply want to bully if they can... So it is part of an ongoing tactic that Irvings are using outside and inside New Brunswick to silence criticisms of any sort.”

Kimber himself has run into similar blowback from J.D. Irving. Last year, he wrote a column for the Atlantic Business Magazine in which he knocked the Irvings for their use of offshore tax havens, noting “Although most of the businesses from which (company founder K.C.) Irving created his wealth were — and are — rooted in New Brunswick, their profits immediately began flowing to his new residence in Bermuda, neatly bypassing the Canadian taxman.”

Kimber and the magazine soon received a letter from Paul B. Schabas, a partner with one of Bay Street’s biggest corporate law firms, Blakes LLP. Schabas is a prominent specialist in media law. The tone of his letter to the magazine was threatening, saying at one point: “Your article is defamatory in falsely stating and suggesting that the Irving family and its companies are engaged in unlawful and unethical conduct, improperly siphoning funds from Canada to offshore tax havens,” and, “My client is considering its legal remedies; however, in the meantime we demand that you, forthwith, remove the article from (the magazine’s) website, and anywhere else you may have posted it,” and that the magazine immediately must post a complete retraction and apology online.

J.K. himself wrote two letters to the magazine in response to Kimber’s column in which the billionaire said his companies pay all taxes owing in Canada, and that J.D. Irving is owned and controlled by entities and Canadian citizens resident in Atlantic Canada. He also noted a couple of factual errors Kimber had made. The magazine, meanwhile, did not apologize or retract the column, but it printed two letters from J.K. and a response from Kimber.

J.D. Irving’s use of Schabas to relay their displeasure with media coverage of the company is not isolated to the Atlantic Business Magazine. Last year, when National Observer was running its six-part series on the Irvings, Schabas sent a steady stream of threatening and angry letters to us on behalf of J.D. Irving, with language such as “Consistent with your previous emails and related stories, your ‘investigative’ reporting appears to consist of rehashing unfounded assertions and not actually doing your homework to come up with fair, balanced reporting in the public interest.” This series was recently nominated for a National Newspaper Award.

Kimber, who has been a journalist on the east coast for decades, says he sees a disturbing new approach the Irvings are taking with the media. “Before they used to just ignore you,” he explains. “I think they have a stronger sense now of image and public relations and all that sort of stuff. I think they are much more willing to be aggressive than they were a couple decades ago… In the old days in New Brunswick, people’s access to information was pretty limited. It’s becoming now, with more Internet media outlets, easier for those things to be seen by people. (The Irvings) recognize some of their control that they could exercise in the past is harder to exercise now.”

“If they are seen to succeed in this kind of bullying stuff, other corporations and their legal firms will look at it and say ‘This is what we do now, this is the way we operate.’” Kimber adds. “If I was a head of another corporation being looked at by the CBC, I would say 'Go after the journalists… and try to undermine and undercut them and scare them off if you can.'"

Poitras declined to comment on J.D. Irving’s complaint and the motivations behind it. J.D. Irving responded by declining to answer questions on the matter, except to say: "Our document to the CBC Ombudsperson and her reply are matter of public record."

The Irvings' Invasion of Maine