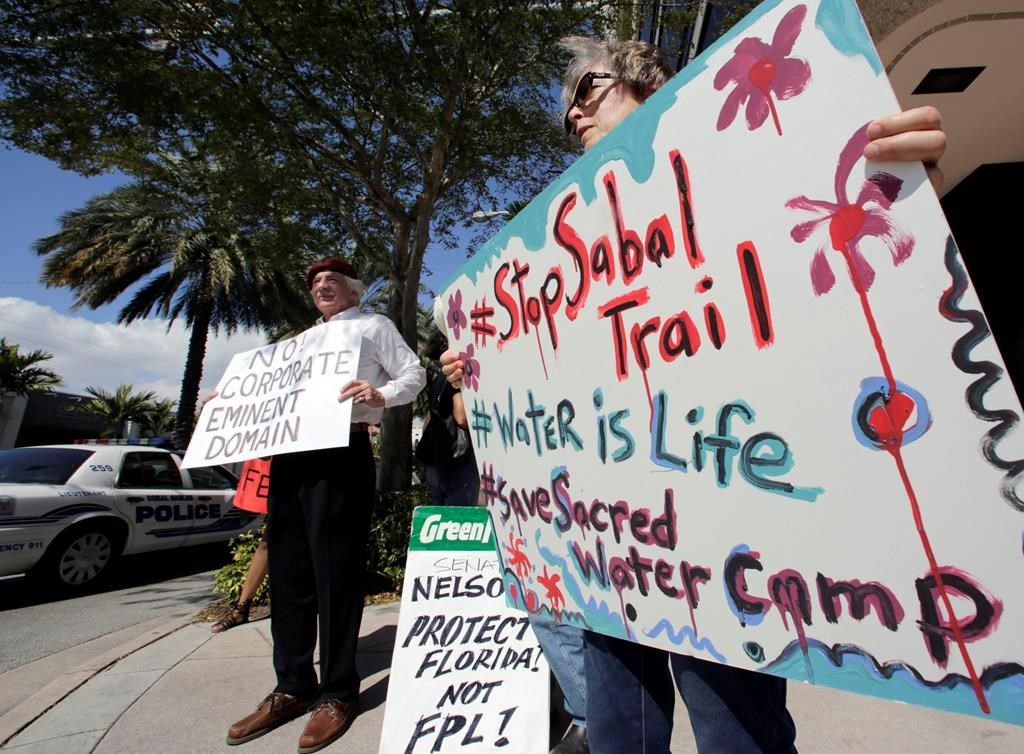 Sabal Trail pipeline protesters hold signs against the pipeline project in front of the office of U.S. Sen. Bill Nelson in Coral Gables, Fla. on Feb. 14, 2017. File photo by The Associated Press
Previous story
Next story

Prolonged protests in North Dakota have failed to stop the flow of oil through the Dakota Access pipeline, at least for now, but they have provided inspiration and a blueprint for protests against pipelines in other states.

The months of demonstrations that sought to halt the four-state pipeline have largely died off with the February clearing of the main protest camp and the completion of the pipeline, which will soon be moving oil from North Dakota to a distribution point in Illinois.

Four Sioux tribes are still suing to try to halt the project, which they say threatens their water supply, cultural sites and religious rights. But they've faced a string of setbacks in court since President Donald Trump moved into the White House.

Despite the setbacks, Dakota Access protest organizers don't view their efforts as wasted. They say the protests helped raise awareness nationwide about their broader push for cleaner energy and greater respect for the rights of indigenous people.

"The opportunity to build awareness started at Standing Rock and it's spreading out to other areas of the United States," said Dave Archambault, the chairman of the Standing Rock Sioux tribe, which has led the legal push to shut down the pipeline project.

As protesters left the area in southern North Dakota where the Dakota Access pipeline crosses under a Missouri River reservoir that serves as the tribes' water supply, organizers called on them to take the fight to other parts of the country where pipelines are in the works.

They're also being used against projects that are still in the planning stages, including the proposed Pilgrim oil pipeline in New York and New Jersey and the proposed Bayou Bridge Pipeline in Louisiana.

Dakota Access opponents have also vowed to fight against the resurgent Keystone XL pipeline, which would move crude oil from Canada to Nebraska and on to Texas Gulf Coast refineries.

"A big part of our message was not just to nationalize the fight against Dakota Access, but to highlight regional issues that people are facing," said Dallas Goldtooth, an organizer with the Indigenous Environmental Network. "To use our momentum."

The influence of the Dakota Access protest is evident in various forms. For example, some who protested in North Dakota have gone to Texas and Florida to help with those demonstrations, according to Goldtooth. The Red Warrior Society, a pipeline protest group that advocated aggressive tactics in North Dakota, is promoting resistance in other states via social media.

There are nearly a dozen accounts on the GoFundMe crowdfunding site seeking money to battle the Sabal Trail and Trans-Pecos pipelines. The Society of Native Nations, which is fighting the Trans-Pecos, used the protest camp model from North Dakota to set up a camp in Texas, according to Executive Director Frankie Orona.

"I really believe this momentum is going to stay alive," said Orona. "Standing Rock was the focal point, was the root of this movement. If we learned anything from Standing Rock, it's the power of unity. It wasn't one (tribal) nation — it was more than 400."

Hundreds, and sometimes thousands, of Dakota Access opponents congregated at the main protest camp for half a year, often clashing with police to draw attention to their cause. More than 750 people were arrested between early August and late February, when the camp was closed in advance of spring flooding season.

The prolonged protest garnered widespread and consistent attention on social media, and it has filtered down, to some degree, to the pipeline protests elsewhere. That has elevated activists' concerns from local demonstrations to a national stage, according to Brian Hosmer, an associate professor of Western American history at the University of Tulsa.

"Social media makes it more difficult to shut off the camera," he said. "In some way, they're their own reporters and they don't need the networks to report it. Social media connects the tribe; it now connects all of these separate groups."

For now, the energy industry and its allies say they're unconcerned.

The Dakota Access movement wrote the new playbook for pipeline opponents, but it might be less effective under Trump, said Craig Stevens, spokesman for the MAIN Coalition, a group of agriculture, business and labour entities that long spoke in favour of the pipeline. Trump approved its completion shortly after taking office and he has taken other steps favourable to the fossil fuel industry while rolling back Obama-era environmental protections.

U.S. Rep. Kevin Cramer, a North Dakota Republican who has advised Trump on energy issues, said pipeline developers have learned to prepare for resistance, and he thinks the anti-pipeline movement will fade if protesters fail to achieve their goals and get discouraged.

Juliana Schwartz, senior campaigner for Change.org, which helps people and groups advance causes, disagrees, saying the environmental protest movement appears to be strong. A "people against pipelines" page on the group's website recently listed 16 petitions related to energy projects — mostly pipelines — in more than half a dozen states, with nearly 725,000 supporters.

"The broader movement to stop resource extraction has taken inspiration from (Dakota Access)," Schwartz said. "I think we can expect to see this trend continue as more and more communities feel that their safety and health is under threat due to the president's support of the fossil fuel industry over marginalized communities."