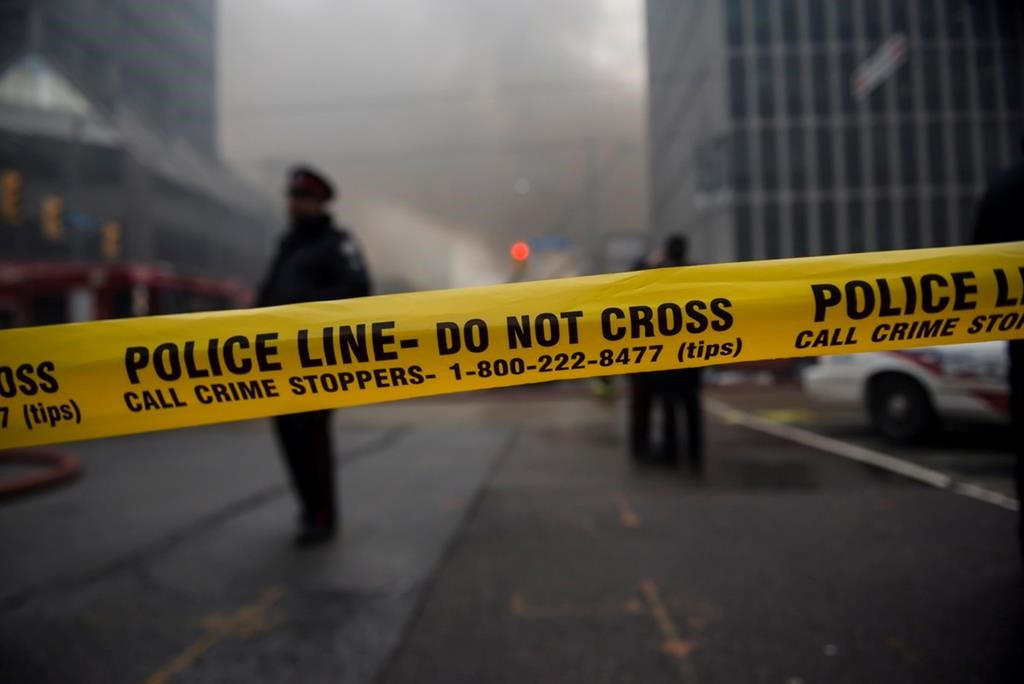 Police tape blocks off a street in Toronto on Tuesday, February 14, 2017. File photo by The Canadian Press
Previous story
Next story

Just how Ontario's police should be policed is the topic of a major report expected Thursday in which a judge with the province's top court will reveal the results of his comprehensive review of the issue.

The 263-page report by the Independent Police Oversight Review is the product of seven months of fact-finding and information gathering across the province.

Justice Michael Tulloch, who headed the government-commissioned review of the three bodies that oversee policing in the province, makes 129 recommendations aimed at streamlining oversight and making it more transparent and accountable.

"It is a broad law-reform proposal," senior review counsel, Danielle Robitaille, said of the report. "I hope it's well received and the government takes it up."

Tulloch, the first black justice on Ontario's Court of Appeal, heard from more than 1,500 individuals in 18 public consultations in centres ranging from Thunder Bay, Ont., to Ottawa, to Toronto to Windsor, Ont. He also held more than 130 private meetings.

Police associations, chiefs of police, police commissioners, and police services board members were also among those weighing in on Ontario's three civilian police-oversight agencies.

A common theme at the public hearings, Robitaille said, was the "troubling reticence" many people have about filing complaints related to police behaviour that ranged from simple rudeness to false arrest and even unnecessary violence.

"In certain segments of the population, there's a real disconnect and loss of faith in the police-oversight system," Robitaille said.

In many cases, relatives of people killed by police expressed distrust both of officers in general and of the oversight system. They spoke of difficulties navigating the complaints process. Criticism was especially sharp from black, Muslim and other racialized communities, as well as from indigenous people, whether living in urban areas or on reserves.

"We think they are all useless," one person told a meeting in Toronto last fall about the three police oversight agencies.

Currently, the Special Investigations Unit is the best known of the agencies. Its mandate is to investigate death, serious injuries, or sexual-assault allegations involving police and to decide whether criminal charges against an officer are warranted. However, the unit has frequently been criticized as having a penchant for secrecy, or for being stacked with former police officers whose sympathies may be skewed toward law enforcement.

The second agency, the Office of the Independent Police Review Director, founded in 2009, deals with public complaints about officer conduct, or the policies and services of a police department. The director can refer a complaint to the relevant chief of police or commissioner of the Ontario Provincial Police for potential disciplinary action. Some participants were sharply critical of the body for refusing to hear them out by insisting on only taking complaints online in a specific format.

The Ontario Civilian Police Commission, perhaps the least known of the oversight trio, aims to ensure effective policing services are in place. Among other things, it handles appeals of discipline meted out to officers, investigates complaints about chiefs of police, and hears disputes between municipalities and police services.

Robitaille called it critical that the public have confidence in the oversight system — that complaints will be fairly and effectively dealt with — because that generates confidence and trust in police more broadly.

Apart from frequent mistrust, the review also found a broad misunderstanding or even a complete lack of knowledge of the system, the lawyer said.

Why did Canadian police cars become so menacing?