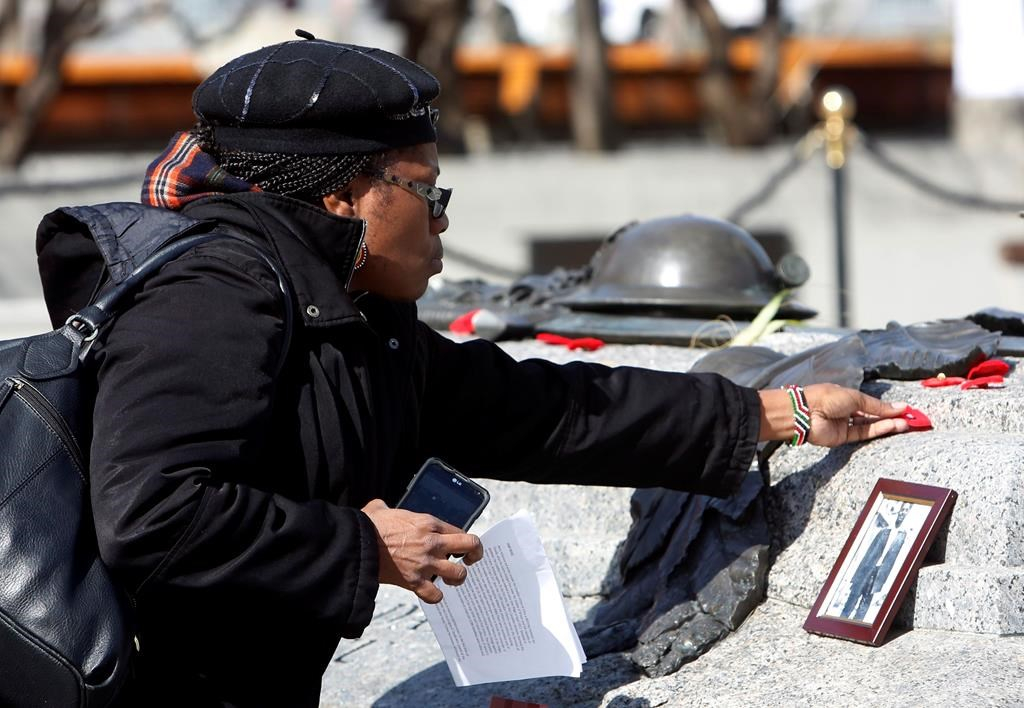 Sarah Onyango of Ottawa lays a poppy on the Tomb of the Unknown Soldier commemorating the 100th Anniversary of Vimy Ridge, at the National War Memorial in Ottawa, Sunday, April 9, 2017. Photo by The Canadian Press
Previous story

Though there are no surviving veterans who fought at Vimy Ridge, Canadians across the country are making sure their legacy is not forgotten on the battle's centennial anniversary.

Those who were not among the 25,000 Canadians at the site of the battle in France on Sunday gathered in communities from coast to coast to remember those who risked or lost their lives in April 1917.

Debbie Ginter, 26, of Steinbach, Man., travelled to Ottawa's Vimy ceremony because she said she couldn't make it the ceremony in France.

She came to honour a man she never met, her great-grandfather Frederick Fox, who fought and survived Vimy — but not after experiencing unimaginable horror.

Like so many others, he'd been gassed and left. He was buried alive for four days before he was pulled from the mud. He would lose his right arm, but would return home to live another 41 years before dying in 1958.

Ginter knelt in silence under the clear blue sky at the Tomb of the Unknown Soldier, framed by limp flags on a windless morning.

She said more people of her generation need to remember the heroic sacrifices of those long gone.

"The selflessness that they had, the respect they had for each other, and just all the turmoil and the sacrifice that they've done, everything that they lost — it was all for this country that they never saw," Ginter said.

Environment Minister Catherine McKenna opened a sombre one-hour remembrance at the National War Memorial under clear blue skies. The battle, she said, marked "our coming of age as a country."

In Toronto, dozens of people gathered at the cenotaph at Old City Hall, where wreaths were laid.

"Vimy was the first time where Canada really came together as a nation to accomplish something important," said 15-year-old Abe Arafat, who delivered the poem "La Rose et le Reseda" at the Toronto ceremony. "So, although we're celebrating Canada 150, it's almost the 100th anniversary of the national sentiment."

Nadine Grill, who works with the education group the Vimy Foundation, said she was touched by how many people took time to commemorate the day.

"There aren't any soldiers left from the First World War, so it's really up to us as a community, as Canadians, to make sure that their stories aren't lost," she said.

In Halifax, cannons bellowed during a 21-gun salute at Citadel Hill, which overlooks the harbour from which hundreds of thousands of allied troops were deployed during the First World War.

"For thousands of those soldiers, and their families, the port of Halifax was where they took their last step on Canadian soil,” host Liz Rigney told the crowd at a concert Sunday afternoon. "Across the Atlantic, popular music was something that connected the families here with the troops overseas. It was something that soldiers cherished, those memories of home."

—With files by Adina Bresge in Halifax.