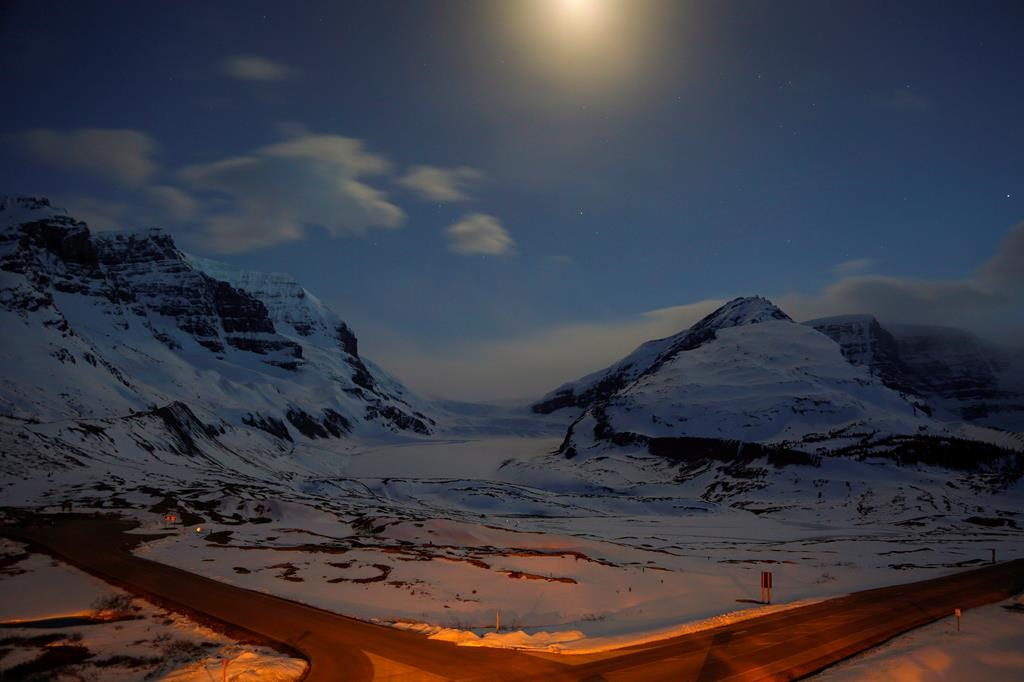 The Athabasca Glacier, centre, part of the Columbia Icefields in Jasper National Park, Alta., is seen in moonlight during a long exposure Wednesday, May 7, 2014. File photo by The Canadian Press
Previous story
Next story

Parks Canada often promotes the Icefields Parkway between Jasper and Banff as "one of the most scenic drives in the world," but a plan to build a bike path along the route has hit its fair share of bumps in the road.

Documents suggest Parks Canada has been rushing ahead with the project after receiving federal money in 2016 with a two-year expiry date.

Months before public consultations began, officials discussed when shovels could hit the ground and looked ahead to a "kickoff" event that would celebrate the start of construction.

"The agency has lost its transparency and its respect for public engagement," said Alison Woodley, Canadian Parks and Wilderness Society national parks program director, who added the project should have never gotten off the ground.

"They've got this massive influx of money and now the money is driving the project instead of due public process."

Last year's federal budget contained $66 million to develop a 107-kilometre bike trail from the Jasper townsite to the Columbia Icefields along the parkway. The trail, with a total budget of $86 million, could eventually extend all the way to Banff.

Cyclists currently hug a narrow shoulder along the highway. Parks Canada is proposing a separate, paved route buffered from the busy road by 10 to 20 metres of trees, but environmental groups say it will damage sensitive caribou and grizzly bear habitat.

Public consultations began in January. Environment minister Catherine McKenna is expected to make a final decision based on the results of public feedback and a yet-to-be-completed detailed impact analysis, also known as an environmental assessment.

However, documents obtained under Access to Information legislation by researcher Ken Rubin and provided to The Canadian Press suggest that Parks Canada staff have been proceeding for months as if the project is a done deal.

In a draft communications plan prepared in August 2016, staff wrote up a timetable for media events that included an event to mark the start of construction, "when Phase 1 of the project is shovel ready," at an undetermined date in 2017. The timetable also includes a ribbon cutting to open Phase 1 — the Jasper to Columbia Icefields portion — at a undetermined date.

"There's a big push to start spending in these first two years as (budget 2016) funding is not available to be carried forward to the third year," say August meeting minutes.

Parks Canada spokeswoman Audrey Champagne said in a statement that public consultation and engagement are key priorities. The proposed trail is currently in the conceptual phase and no final decisions have been made, she said.

"The feedback Parks Canada receives will be carefully reviewed and used to inform decisions on the overall project," she said.

She added that strict development limits are in place to ensure the protection of ecological integrity in national parks.

"Parks Canada remains committed to a rigorous development review and environmental assessment process that ensures all development proposals comply with these limits and that a park's ecological integrity is maintained," she said.

But meeting minutes suggest the agency has been looking ahead to construction for months.

"Engineers cannot wait until the IA process is complete," read minutes from June 2016, referring to the impact analysis.

The next month, an action item directed one staff member to determine "how long the IA process will take before ground can be broken."

By mid-July, the goal was for construction to begin in May or June 2017. The bird breeding period was a concern, with minutes saying it "could significantly slow down the process and determine how we manage the construction phases."

In a status report in August, the project schedule is described as "extremely aggressive and could be considered high risk, however it is listed as medium risk due to the very preliminary state of detailed schedule preparation and analysis."

The documents also raise concerns about effects on wildlife. They say sight lines need to be cleared to give cyclists travelling 30 kilometres per hour about four to five seconds of vision ahead, which is "important to avoid human-bear conflicts.

"Where sightlines need to be shorter, use signs to ask users to make noise," the documents say.

A preliminary analysis also indicated the trail would "overlap with caribou habitat."

The House of Commons environment committee expressed concerns in a report last month that Parks Canada's public consultations have become limited to a few weeks of geographically restricted consultations, often after years of closed-door discussions with private developers and once internal decisions have already been made.

"Despite repeated questions to numerous witnesses, the committee was unable to determine what process led up to the announcement in budget 2016 of a $65.9 million investment for a new biking and walking trail in Jasper National Park," it said.