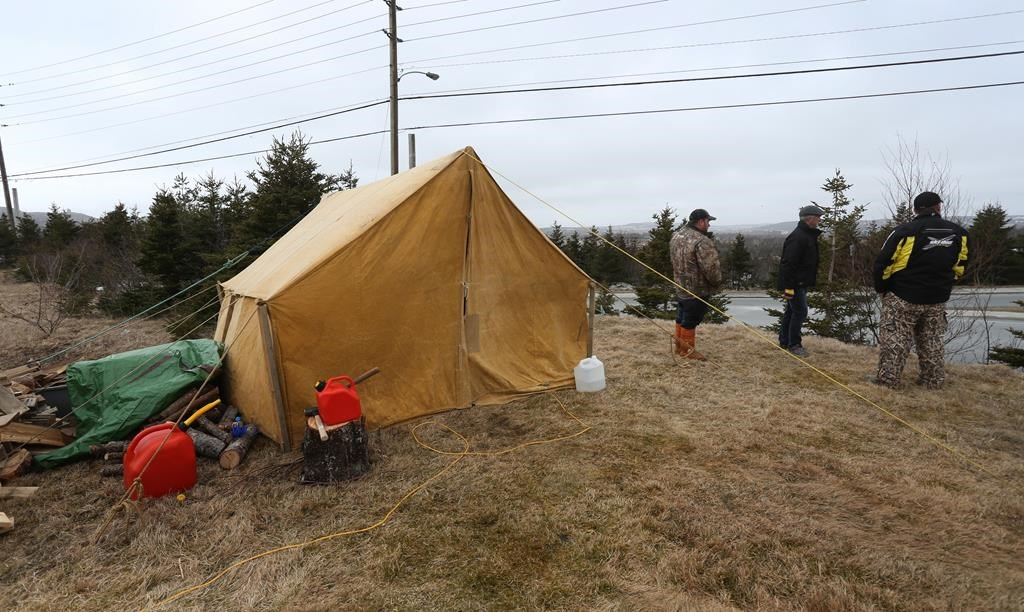 Unidendtified supporters of hunger striker Richard Gillett, vice-president of the FISH-NL, stand outside the tent that he set up outside of the DFO offices in St. John's on Wednesday, Apr. 19, 2017. Photo by The Canadian Press/Paul Daly
Previous story
Next story

About three dozen protesters went to the federal fisheries office in St. John's, N.L., on Thursday morning to support a celebrity fisherman on a hunger strike.

Linda Gillett, the mother of hunger striker Richard Gillett, said the protesters include fishermen and other supporters of her son.

Richard Gillett has been on a hunger strike since last Thursday, demanding a meeting in person or via teleconference with the federal fisheries minister over quota cuts to shrimp and crab.

His mother said Gillett is participating in the protest, though he is walking very slowly and becoming weak due to his lack of nourishment.

"As his mother, I'm getting pretty worried about him right now. I don't know if he's going last too many more days," she said.

"But he's determined he's going to until they come across with his demands or we'll have to call the ambulance and take him off."

Gillett is known for his three seasons on the reality show "Cold Water Cowboys," and is vice-president of the Federation of Independent Sea Harvesters of Newfoundland and Labrador (FISH-NL).

The fisherman has accused Ottawa of dire mismanagement of stocks ranging from crab to capelin.

In addition to the teleconference call with federal Fisheries Minister Dominic LeBlanc, Gillett is seeking an independent review of science and management for all provincial fish stocks.

He also wants a review of the relationship between the Fish, Food and Allied Workers union, representing harvesters, and the federal Department of Fisheries and Oceans.

Gillett said he decided to do something drastic last week after LeBlanc refused to meet with him and FISH-NL president Ryan Cleary as they visited Ottawa.

In an emailed statement, Kevin Anderson, regional director general for Fisheries and Oceans Canada, has said he understands it's a difficult time and the department is willing to listen.

"It is of course concerning when anyone takes a course of action such as the one Mr. Gillett is pursuing, and we share the public's concern for his health.''

DFO not in conflict of interest for promoting, safeguarding fishery: LeBlanc