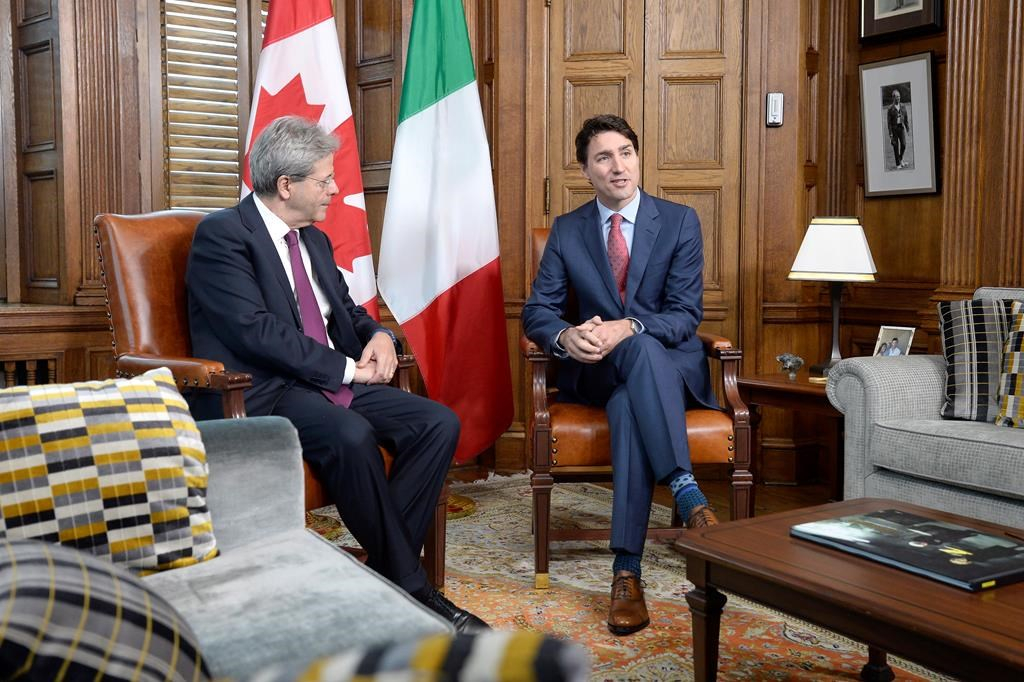 One day after Donald Trump called Canada a "disgrace" for policies that hurt American farmers, Prime Minister Justin Trudeau said he plans to be respectful and engage with the U.S. on a fact-based approach to solve problems.

"I will stand up for Canada's interests," Trudeau said Friday during a news conference alongside the visiting Italian prime minister, Paolo Gentiloni.

"The way to do that is to make arguments in a respectful fashion, based on facts, and work constructively and collaboratively with our neighbours."

Trudeau offered that reply to the U.S. president's latest anti-Canada trade tirade, one in which Trump savaged Canada for creating a new lower-priced classification of a milk product that he argues hurts U.S. producers.

Trump's presence was strongly felt during Gentiloni's visit, as is becoming almost routine with most of Trudeau's international interactions.

Both Trudeau and Gentiloni, who met Trump in Washington on Thursday, were keen to display their support for free trade and open borders — including the Canada-EU free trade pact — in the face of growing populist opposition. Gentiloni also praised Canada's acceptance of 40,000 Syrian refugees as an example for all of Europe.

They took pains not to offend the man most closely associated with the growing popularity of protectionist trade measures and closed borders: Trump.

Trudeau adhered to his firm, don't-offend-Trump strategy. Gentiloni insisted he wasn't singling out the U.S. president — even though he appeared to drop hints in that direction from the moment of his first public handshake with Trudeau.

"The United States president's opinions are perfectly legitimate," the Italian leader said through a translator at a joint press conference with Trudeau.

"But we have to be aware of the fact that this push that goes against free trade as a catalyst for world growth . . . we need to work politically, culturally and economically to fight against this trend."

Earlier Friday, at the start of his meeting in Trudeau's office, Gentiloni said Canada and Italy share a common, pro-trade world view.

"We are living in interesting times and this common vision, I think, will be helpful for us and for the world," Gentiloni said.

Gentiloni found himself at odds Friday with Trump over Sunday's elections in France, where two populist candidates are casting doubt over France's future in the European Union.

After a gunman killed a police officer on the Champs-Elysees, an attack the Islamic State has claimed responsibility for, Trump tweeted: "Another terrorist attack in Paris. The people of France will not take much more of this. Will have a big effect on presidential election!"

Trudeau declined to answer a question on the topic.

Trudeau and Gentiloni will be dealing with Trump in person because Italy is to host the G7 leaders' summit next month, which will be part of Trump's entry into the world of multilateral summitry. Trump will debut at the NATO leaders' summit in Brussels a day ahead of the G7 gathering.

The G7 summit will be important to both Gentiloni and Trudeau.

The Italians will naturally want a smooth meeting, but nothing is predictable with Trump on hand. Trump has roundly criticized many of the world's international institutions and once called NATO obsolete.

Trump on Thursday praised Italy's contributions to the wars in Iraq and Afghanistan and its efforts to promote stability in Libya. Italy has also committed to increase its defence spending to two per cent of gross domestic product, the target Trump wants all NATO members to reach. Trudeau, however, has long insisted Canada is already doing its fair share.

For Canada, next month's G7 will serve as a handover for next year, when its turn comes to host the gathering.

That means Trump will be visiting somewhere in Canada in 2018 and the world's attention will undoubtedly be focused on the event.

Trudeau said the upcoming summit formed a large part of his talks with Gentiloni. Trudeau also said he will have an audience with Pope Francis in Vatican City after the G7 talks.

As for the Italian G7 summit, Gentiloni made it clear he's looking forward to sharing the leaders' table with Trudeau.

"We have a number of visions that tie us together," he said.

"Democracy, rights, open society and free trade, international dialogue also. All of this goes hand in hand in hand."