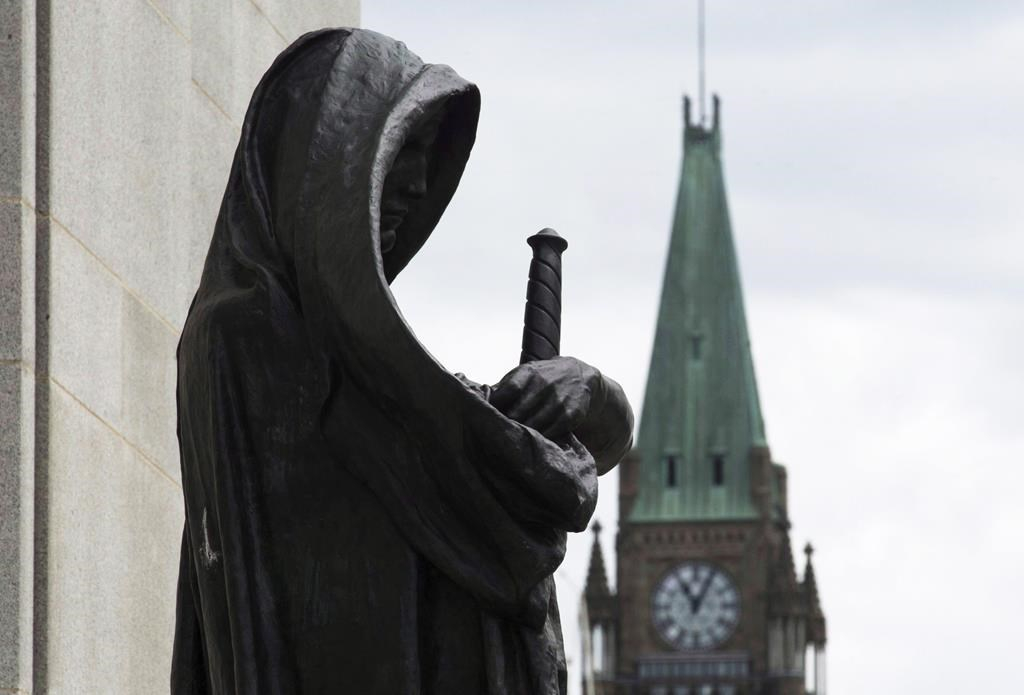 The Peace tower on Parliament Hill is seen behind the justice statue outside the Supreme Court of Canada in Ottawa, Monday June 6, 2016. File Photo by THe Canadian Press/Adrian Wyld
Previous story
Next story

The federal Liberals came to power promising sweeping reforms to the criminal justice system, but now the provinces are championing some ideas of their own as they focus on cutting backlogs in the courts.

"I think for the most part, the provinces recognize the status quo isn't an option and we need those changes to take place," Manitoba Justice Minister Heather Stefanson said in an interview.

"Time is moving on and now is the time for action."

Stefanson and other provincial and territorial justice ministers are gathering Friday in Gatineau, Que., for an emergency meeting with their federal counterpart, Jody Wilson-Raybould, to discuss how to tackle delays in the criminal courts.

It is not a new problem, but finding a solution has become more urgent.

The Supreme Court of Canada issued a groundbreaking decision last summer, R. v. Jordan, that set out a new framework for determining whether a criminal trial has been unreasonably delayed, citing a "culture of complacency" for contributing to the problem.

The Charter of Rights and Freedoms says someone charged with an offence has the right to have their case tried within a reasonable amount of time. In a 5-4 decision, the high court defined that period as 18 months for provincial courts and 30 months for superior courts.

There is room for exceptions, and the ruling came with a transitional measure for cases already in the system, but a dissenting minority opinion argued the new time limits could lead to thousands of prosecutions being tossed out.

Prime Minister Justin Trudeau gave Wilson-Raybould a mandate to work with the provinces and territories "to improve the efficiency and effectiveness of the criminal justice system," but her marching orders focused on solutions such as the better use of digital technology, bail reform and sentencing alternatives.

Those ideas, along with the ongoing need for judicial appointments, will no doubt come up Friday.

But some provinces will also be urging the federal Liberals to change the Criminal Code to either curtail or eliminate the use of preliminary inquiries, which take place in certain serious cases to determine if there is enough evidence for a matter to go to trial.

Ontario Justice Minister Yasir Naqvi is one of those behind that idea.

"We've got a challenge that has been given to us by the Supreme Court of Canada," Naqvi said in an interview. "They have said there is complacency within the system, and bold reforms are needed."

Manitoba is also pushing hard for that change, so the province can go ahead with a four-year pilot project to replace preliminary inquiries with an out-of-court discovery process, or, for less serious cases, do away with them altogether.

Wilson-Raybould said in a statement Wednesday that she is aware of the proposals from Ontario and Manitoba and looks forward to discussing it with them.

Rene Basque, president of the Canadian Bar Association, wrote a letter to all 13 justice ministers Thursday morning to make the case against doing away with preliminary inquiries.

"We believe that any evidence linking court delays to the preliminary inquiry is speculative at best," Basque wrote, adding the Criminal Code already allow prosecutors and the courts to "strictly regulate" their use.

"Even when preliminary inquiries do not result in early resolution of dismissal of a case, as they frequently do, our experience is that they significantly reduce the time needed in superior courts," Basque wrote.

According to Statistics Canada, preliminary inquiries took place in less than three per cent of cases in the adult criminal court system in 2014-15, and 81 per cent of those cases were completed within a 30-month period.

Saskatchewan Justice Minister Gordon Wyant said Wednesday that he wanted to hear more about alternatives to preliminary inquiries, but also promised to consult widely before the province figures out what to do.

"If it ends up increasing the time of the trial, for instance, that doesn't have a preliminary hearing, it doesn't serve much of a purpose," Wyant told reporters at the provincial legislature Wednesday.

James Pickard, president of the Alberta Crown Attorneys' Association, said he is in favour of cutting back on preliminary inquiries, but would like to see more data on how that would save time in the courts.

Pickard said the issue is complicated, but most of it boils down to the need for more resources.

The Liberals brought in a new appointments process last fall, but as of April. 1, there were 59 vacancies for federally appointed positions.

Eric Gottardi, one of the defence lawyers in R. v. Jordan, said the problem goes far beyond empty seats.

"If they were all filled tomorrow, it's not like the delay problem would disappear in the next three months," he said.

The higher number of mandatory minimum sentences the previous Conservative government brought in contributed to the problem, he said, as it took away a lot of discretion from both judges and prosecutors to find ways to divert trials.

"I think in promising to take a more comprehensive look at the criminal justice system and sentencing in general, maybe (the federal Liberals) didn't realize how big a problem it was and how far-reaching that would have to be," Gottardi said.

"It is a huge job and that may in fact be slowing them down," added Gottardi.