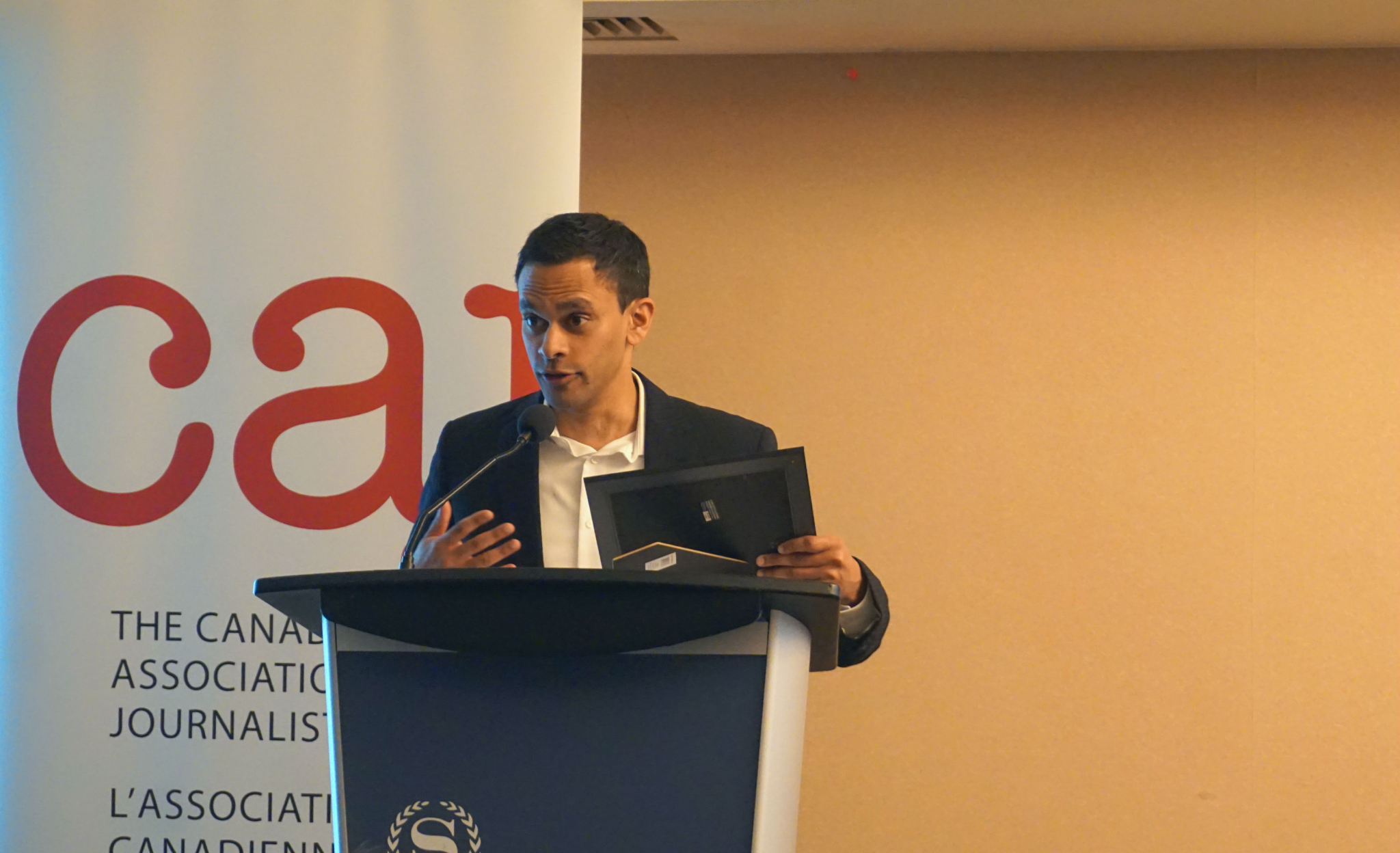 Mike De Souza, National Observer's managing editor, accepts an award in Ottawa on April 29, 2017 from the Canadian Association of Journalists for his investigation into the National Energy Board. Photo by Elizabeth McSheffrey
Previous story
Next story

I still remember the day I got the mysterious message. It said that federal public servants had hired a private investigator to find out more about me and my sources. I pored through the information and shook my head in disbelief.

For more than a decade, I’ve been one of a small group of reporters in Canada who write about energy and environment issues. Sometimes, I uncover stories that bother people who want to protect the status quo.

I also hear from people who say my reporting helps keep the public informed about critical issues affecting their jobs, health and the environment.

In this case, someone was upset that I had inside information about gaffes made at Canada’s pipeline regulator, the National Energy Board. One of those gaffes was made by the top bureaucrat at the NEB. She joked in front of all her staff that they should carry stun guns when approaching environmentalists.

'Staff are scared and unhappy'

But the leaking of these details, from a general town hall meeting for NEB staff, apparently didn't sit well with senior management. They brought in a private investigator.

And then I got this call for help:

“Mistakes are being made at the NEB. Senior executives (are) spending their time and money trying to find out who’s leaking information. This is not very transparent… Staff are scared and unhappy.”

It turns out that one of the key executives participating in what the message described as those “not very transparent” actions was the executive vice president of “transparency and strategic engagement” at the regulator.

He had sent out a message to all staff last November telling them that the NEB had hired a private firm to find out who was talking to reporters. He described it as a “security risk” and said a full investigation was underway to resolve the problem.

I took a deep breath. Then I started thinking about what to do next. I was concerned about the well-being of the people who had stuck their necks out.

They had provided me with information clearly in the public interest. They believed that there was misconduct by management but now they were being blamed for blowing the whistle. I knew I had a responsibility to proceed carefully and protect all of my confidential sources.

It took me months of research, phone calls and new freedom of information requests to piece together the whole story.

It wasn’t easy to get answers.

The senior executives at the NEB weren't open and transparent about what they had done and why. They all declined my requests for interviews, including the executive vice-president of transparency and strategic engagement.

I was left to wonder whether the private investigator had me under surveillance as well. You've probably read the stories about police spying on top-notch journalists in Montreal.

So I asked the NEB repeatedly if it could confirm that surveillance of reporters wasn't happening. The NEB and private investigator ignored my questions, so I finally decided to pay a visit to the offices of this private investigator with National Observer photojournalist Alex Tétreault.

Alex and I were greeted at the door by a polite investigator from the firm. He told us he didn’t know about our case but would have his boss get back to us if we left our contact information. I told him that I had already been in touch with his boss, but wasn’t getting answers.

By the end of that day the NEB got in touch with an email. They wrote that they had spoken with their investigator who said there was no surveillance of any reporter.

But what's clear is that by hiring a private investigator, the NEB was firing a warning to anyone thinking about blowing the whistle on wrongdoing.

So what does this all mean?

In Canada, freedom of the press is a fundamental right that is enshrined in our constitution. Journalists rely on multiple sources for information, including courageous whistleblowers who seek to report and correct misconduct.

And yet, the NEB is continuing to allow this contract with a private investigator, worth $24,150, to continue. And they're using federal government funds to pursue their hunt for whistleblowers.

I know this is just as important to you as it is to me — especially on World Press Freedom Day. Today is a day in which we celebrate and recognize the vital role that a free press plays in a fair and just society.

And it should also be a reminder that we must remain vigilant. I think most Canadians would agree that it is shameful to see Canada dropping to number 22 on the World Press Freedom Index compiled by Reporters Without Borders.

We can do better.

There are people making critical decisions that affect your lives without you knowing about it. In a lot of cases, these people have good intentions and do good work.

In some cases, there are mistakes and blunders that can have serious consequences.

And that’s where you and I both come in.

The team that I work with at National Observer is outstanding, but we face constant pressures and legal threats as we pursue investigative projects. This is why I come back to you, over and over again, to ask for your help. It’s because I really can’t do this without you. We don’t have a billionaire behind us, but I believe that we can thrive with your help.

Our company was founded by Linda Solomon Wood. We're one of the only Canadian daily news outlets with a woman at the helm. (Our friends of The Tyee and Desmog Canada are also led by women) Linda has worked hard to build National Observer into the publication it is today. And despite the odds, we’re two years old.

With your help, Linda and I can continue to build and grow a sustainable, reader-funded media company that puts the public interest at the heart of our reporting.

Every subscription at National Observer helps support the mission of journalism. And to mark this special day, we're going to take things one step further.

Starting today and for the next week, leading up to the British Columbia election, everyone will have full access to all stories on the site. This is our gift to democracy and a special thank you to the special readers who helped us achieve everything we've managed to accomplish ever since National Observer was born, two years ago.

For those of you who are already subscribers, thank you for allowing me to continue serving and informing you. Please consider referring your friends and family and letting them know that good journalism is worth fighting for.

You can also donate here. Every dollar will help fund our investigative reporting pool so that we can continue to pursue stories from whistleblowers. Your funds will also be used to create a secure drop for whistleblowers to provide us with information without fear of their identity getting hacked and made public.

I’ve spoken to other brave whistleblowers who are waiting in the wings to tell their stories.

And I’m counting on all of you to step forward. Let’s ensure that all of their voices are heard.

Editor's note: This article was updated at 4:05 p.m. to correct that National Observer is one of the only Canadian daily news outlets with a woman at the helm.