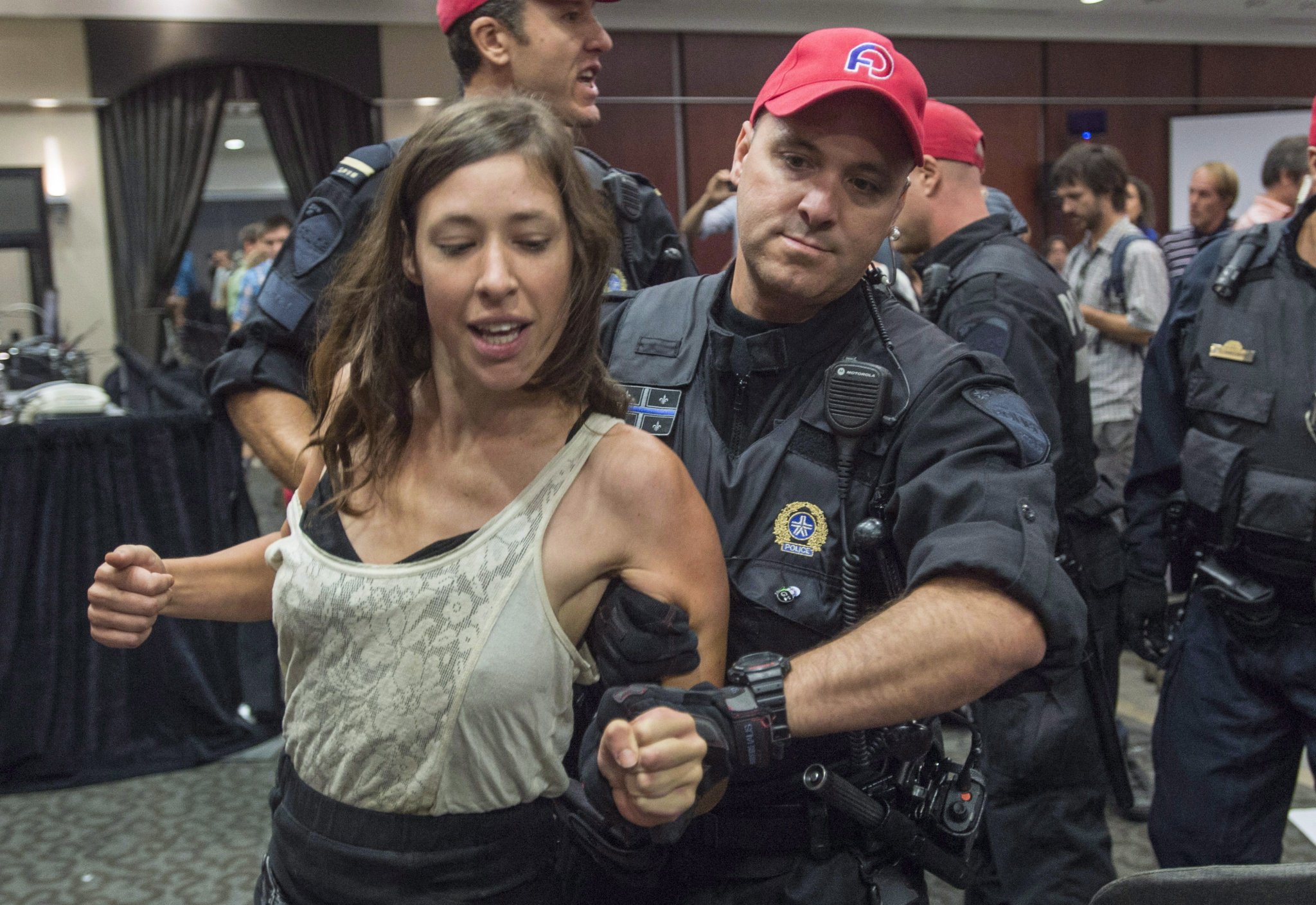 Alyssa Symons-Bélanger is detained by police following protest at National Energy Board hearings on the Energy East pipeline in Montreal on Aug. 29, 2016. Photo by The Canadian Press.
Previous story
Next story

A lone protester ran in circles, grabbing a government binder full of documents and waving it in the air as private security guards quickly surrounded the 34-year-old man and violently tried to restrain him.

That was the scene in Montreal a few weeks ago when Canada’s National Energy Board attempted, but failed, to hold public hearings on the Energy East pipeline, proposed by Calgary-based TransCanada Corp.

The NEB suspended the day's hearings blaming protesters for initiating violence as the regulator struggled to cope with conflict of interest allegations that would later force recusals of its highest-ranking officials, including chief executive Peter Watson. The proceedings have been adjourned until replacements can be found.

The security breakdown appears to have annoyed senior management to the point that its top bureaucrat joked at a staff meeting that the regulator’s employees should be armed with tasers at public hearings.

The NEB said the joke, by chief operating officer Josée Touchette, has been taken out of context by some of its employees and that she actually was trying “to diminish stressors and invite continuous dialogue.” But her ill-timed attempt at humour is likely to add some fresh ammunition for critics who believe the National Energy Board is too cozy with industry and in need of a complete overhaul.

The NEB has not clarified why security arrangements were so minimal and left in the hands of private security guards ahead of such a highly contentious hearing in a city known for public protest. National Observer has learned that Montreal police cancelled a contract to provide security for the NEB on a Friday, leaving only the weekend before the hearings started. Both the NEB and Montreal police said this was a normal decision, based on their evolving assessment of security.

But that decision left the first response in the hands of the private security who initiated the violent encounter.

The Montreal protest, triggered by allegations of conflict of interest uncovered in July and August by National Observer, would eventually force a three-member panel presiding over the hearings to adjourn and step aside in the face of a public outcry including criticism from cities, First Nations leaders and environmental groups across the country. Many of these stakeholders have called for a brand new review starting from square one, alleging bias in the panelists' decision to accept the application from TransCanada as complete, despite missing information about dangerous water crossings along the proposed route, including the Ottawa and Saint-Lawrence Rivers.

Opponents of TransCanada’s Energy East project argue the project is too risky and will push Canada’s climate change goals out of reach. It is the largest pipeline ever proposed in Canada, 4,500 kilometre long with the capacity to carry up to 1.1 million barrels of oil per day between Alberta and New Brunswick.

Supporters, including many business and union leaders say the pipeline would create thousands of construction jobs and boost the Canadian economy.

The running man who initiated the kerfuffle at the hearings remains mysterious. He has not been formally arraigned and his identity has not been released. He is known only as “P-O” (for Pierre-Olivier or Paul-Olivier) and his actions surprised other activists in the room. A few of them told National Observer they spontaneously decided to support the running man by chanting and clapping until the National Energy Board shut down the Montreal hearings on Aug. 29.

“It wasn't really organized,” said Mikael Rioux, 40, a Montreal-based activist from Greenpeace, who was among three people detained by police, but not charged. “I was there early in the morning to organize the demonstration outside. When it finished, I told people (the pipeline panel session) was public and we had a right to be inside.”

So Rioux said he went up a few floors. He took the escalators and entered the room to find a group of people, including P-O, holding a banner in the front of the room when he arrived. No security guard tried to stop him from entering as the boisterous crowd chanted criticism of Calgary-based TransCanada and its regulator, the NEB, which is also based in Calgary.

“I stayed in the back and clapped and was yelling the same chants,” Rioux said.

Rioux and his partner, Alyssa Symons-Bélanger, are no strangers to action against fossil fuel development. Both were recently involved in protests against Enbridge’s Line 9 pipeline reversal project. Symons-Bélanger was part of civil disobedience action, chaining herself to a fence outside Suncor’s Montreal oil refinery, with two others in 2014. Rioux and Symons-Bélanger were also both featured in a recent documentary, called Pipelines, Power and Democracy.

Their spontaneous chanting during the Energy East hearings ended after Montreal police stormed the room, forcibly, detaining Rioux, Symons-Bélanger and the running man.

The NEB, which was ultimately responsible for the behaviour of the security guards, blamed protesters for provoking the violence.

According to sources who asked not to be identified for fear of reprisals, Josée Touchette, the NEB chief operating officer, held a staff meeting following the failed hearing and made the jokes about arming staff with tasers. The NEB told National Observer in a statement that Touchette was not trying to make light of the situation and denied that she did anything wrong.

“It is regrettable that Ms. Touchette's words are being grossly taken out of context by your sources,” said NEB spokesman Craig Loewen.

“A staff meeting was called within a day of the violent events in Montreal, the purpose of which was to assure staff that senior management takes security very seriously and to take questions from staff in that regard.”

Loewen said that Touchette’s comments came at the end of the meeting as she recounted a chat she had just had with a Board member who observed, “how Canadian it was for the protestor to give back a binder of NEB materials to a staff member while he was resisting security.”

Footage captured by television networks show that private security guards, hired by the NEB, initiated the violent encounter with P-O, after he ran up to the table where the three panelists, Roland George, Lyne Mercier and Jacques Gauthier, were sitting. All three later recused themselves from sitting on the panel due to the conflict of interest allegations. The footage also shows P-O politely nodding to the NEB employee as he returned the binder.

“Ms. Touchette did say in jest, at that point only, that this staff member shouldn’t try to wrestle materials out of protestors' hands lest she was equipped with something like a Taser. At no point did Ms. Touchette imply that hearing staff should be armed in any way.”

“This comment was in no way an attempt to diminish the situation staff faced in Montreal. It was an attempt to close the staff meeting on a lighter note to diminish stressors and invite continuous dialogue. Any suggest(ion) to the contrary is misreading the intent of the comments.”

The television footage also shows an NEB employee gesturing for the private security guards to stop manhandling the running man.

Symons-Bélanger, a 27-year old from Trois-Pistoles in Eastern Quebec, argues that all of the problems have been provoked by the NEB and energy companies that are seeking to radically expand Canada’s oil and gas industry.

“It’s easy to qualify something as violence for someone who is running in the room,” said Symons-Bélanger in an interview.

“Whenever we disrupt the image of what’s acceptable, it’s easy to label it as violence. But the violence comes from these institutions and these multinational companies.”

Symons-Bélanger said she tried to free herself after one of the police officers aggressively grabbed her arm. Rioux also said that he doesn’t know why police detained him and that they initially failed to read him his rights or inform him how he broke the law.

P-O declined a request for an interview from National Observer.

No other protesters were arrested and Rioux questioned whether police had targeted him and Symons-Bélanger through profiling because of their previous activism.

“When they told everyone to leave, I started to move out and a police officer grabbed me by the arm. I (saw) that he was arresting (Symons-Bélanger) and she was yelling that he was hurting her.”

Montreal police said the three that they detained, P-O, Rioux and Symons-Bélanger, were warned to clear the room before police came in and that’s why they were arrested.

Police also said that the local security had the right to use “reasonable force” to ensure security for participants and members of the public that attended the hearings.

“The three people who were arrested were warned to leave the room, but not by the police. The ‘owners’ of the area asked the people to leave,” Montreal police spokeswoman Mélanie Lajoie told National Observer. “The people were therefore warned, a notice was read to them, telling them to leave (and) the police were then called to assist with those responsible (for the room.)”

Kristian Gareau, 36, a Montreal resident who joined in the protest inside the hearings room, believes the security response reflects a colonial attitude from government and industry and their sense of entitlement.

“It’s about this insidious culture of violence that’s very subtle,” said Gareau, a masters student studying the environmental politics of pipeline debates in Canada. “So it’s not really that surprising to me that the very same culture that propagates this form of petroleum violence is also accusing protesters — who are peacefully standing up for the rights of mother earth and its peoples — of violence. I think it’s really quite shameful.”

NEB is beyond acceptable,

NEB is beyond acceptable, reputable. I have never come across a government organization with less respect, with less understanding of climate change. Peter Watson and his hooligans must be immobilized as soon as possible. And they are hooligans, they deserve no more respect than Harper. Watson/Harper deserve each other, should consider a life together!

Perhaps, if our energy

Perhaps, if our energy regulators were less biased and more transparent, people would not be forced to be disruptive in public meetings in order to make their views understood and considered.
In New Brunswick, a moratorium was not achieved on fracking until people had been willing to be arrested and beaten up by police. What does this say about the state of our democracy? Do people have to put themselves at this kind of risk in order to protect our environment and public health?