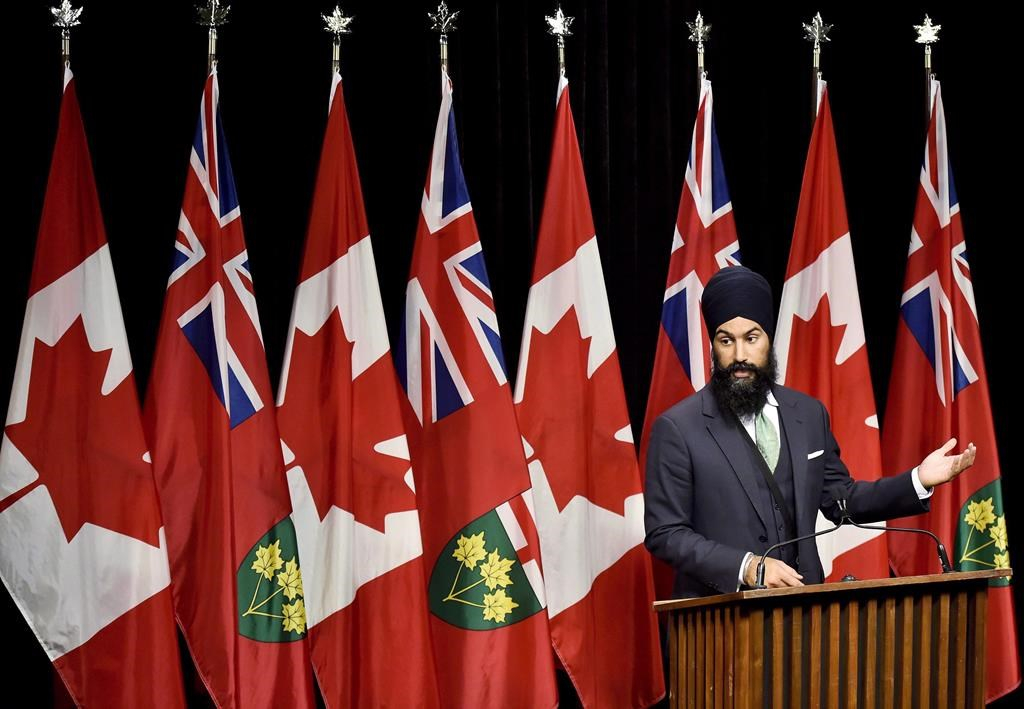 Jagmeet Singh, long a star among the New Democratic Party ranks of the Ontario legislature, embarks Monday on a bid to replace Tom Mulcair — a quest that could make him the first non-Caucasian to head a major federal party.

Singh, who currently serves as the Ontario NDP's deputy leader, was to launch his campaign alongside supporters at an event at Bombay Palace in Brampton, Ont., the same place he celebrated his 2011 provincial win.

Should he be successful, Singh — a Sikh who wears a turban— would break through a long-standing barrier at the federal level that really ought have been shattered long ago, said Karl Belanger, Mulcair's former principal secretary.

"Having somebody from a different ethnic background than what we have seen over the past 150 years is something that needs to be applauded," Belanger said.

The NDP has had trouble connecting with ethnic minorities both in Ontario and at the federal level, said Queen's University labour and history professor Christo Aivalis.

"He speaks to a new Canada"

Singh's leadership would send a strong signal to the party and to the Canadian public, Aivalis said.

"While some people fear that his turban, his name, his skin colour ... could hurt him in certain parts of Canada, others say that in big cities where the majority of seats are, he speaks to a new Canada," Aivalis said.

In the run-up to the 2015 election, the NDP campaign hit a brick wall when Mulcair got caught between a political rock — the question of whether to allow Muslim face coverings during citizenship ceremonies — and a hard place, that being Quebec.

The NDP leader, who entered the campaign as the front-runner, saw his base of support in his home province bleed away after he opposed Conservative and Bloc Quebecois plans to ban the niqab during the oath of citizenship.

That controversy highlights how secularism can be used by some to promote discriminatory policies, capitalize on identity issues and create divisions, Belanger said. "Quebec has a strong movement opposed to religious symbols."

That could be an issue for Singh, he added, but to what extent is not yet clear.

Born in the east Toronto community of Scarborough to Punjabi parents, Singh's upbringing included stints in St. John's, N.L., and Windsor, Ont.; he worked as a criminal defence attorney before making the jump to politics in 2011.

Known as a fashion plate

He's also known as a fashion plate — he has graced multiple best-dressed and style-icon lists in the Toronto area over the years — and for his prowess as a mixed martial arts fighter.

Singh's candidacy will undoubtedly bring a new dimension to the race, said Nathan Cullen, a veteran MP who was one of several rivals to Mulcair iin 2012.

"I think it will likely change the dynamic for the good," Cullen said in an interview. "I've always been a fan; he's a compelling speaker and has solid progressive roots and I think would be a challenge for (Prime Minister Justin) Trudeau."

Cullen said he believes the race is shaping up well, especially since at one point, it wasn't clear whether anyone really wanted to join what was sure to be a long and protracted race. Voting is scheduled in October.

Cullen, too, said it's high time there was some diversity on display in the offices of Ottawa's political leaders.

"It will be a challenge to some people's perspective as well of what a Canadian political leader looks like and where they come from."

Former veterans ombudsman Pat Stogran and Montreal consulting firm founder Ibrahim Bruno El-Khoury are also running, but are not yet considered official because they haven't submitted nomination paperwork or paid the fee.

The next leadership debate is scheduled for Sudbury, Ont., on May 28.