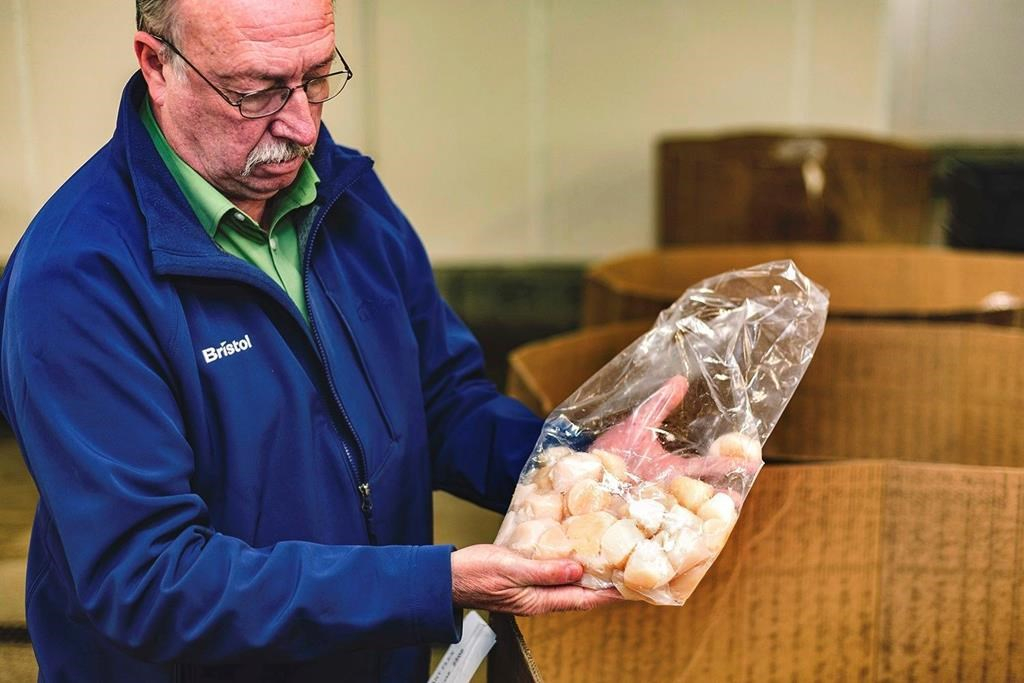 An undated photo showing Rick Elliott of Bristol Seafood in Portland, Maine, examining a bag of scallops at an auction in New Bedford, Mass. File photo by the Associated Press
Previous story
Next story

Jobs that could have gone to indigenous Canadians went to temporary foreign workers because Canada's labour department failed to follow its own policies, Canada's auditor general, Michael Ferguson, has found.

Businesses have to show that they tried to recruit from under-represented groups to fill low-wage jobs, but Ferguson revealed Tuesday that 65 per cent of employers "did not make adequate efforts" to appeal to them—and yet the department approved most of these applications anyway.

For example, bureaucrats in charge of approving temporary foreign worker applications granted them for some fish and seafood processing plants located near First Nations communities, Ferguson's report stated, "even when efforts to recruit from those communities were not found on file."

In a response, the department pointed to the Trudeau government's December 2016 commitment to boost the requirements of under-represented groups such as indigenous people, youth, newcomers and people with disabilities. It said these reforms would be put in place by "summer 2017."

Employment Minister Patty Hajdu said the government's "highest priority" was making sure Canadians were "first in line" for jobs in Canada.

In a statement issued Tuesday afternoon, she pointed out that the audit was carried out between Jan. 1, 2013 and Aug. 31, 2016, and said it "confirms many of the concerns we have raised about how this program had previously been managed."

"This is something that the Liberals called for repeatedly when we were in opposition during the Conservative government's mismanagement of the program," Hajdu told reporters outside the House of Commons.

Last month, the government produced its Path Forward Plan for the Temporary Foreign Worker Program, which she said "will help ensure the program keeps Canadians first in line for available jobs, stays responsive to the needs of the Canadian job market and protects the rights of vulnerable foreign workers."

Caregivers accepted to Canada plummeted from 2014 to 2015

Over a million Canadians are unemployed, yet some employers can't fill vacant positions. That's led to years of criticism of Canada's temporary foreign worker program, which is designed to fill gaps in the labour market with migrant workers—but only as a last resort when Canadians aren't available.

The Harper government overhauled the program in 2014, cutting off business access in certain circumstances and trying to incorporate more labour market information into the process.

Ferguson's report, however, said Employment and Social Development Canada "did not do enough to ensure that employers hired temporary foreign workers only as a last resort."

In some cases, the department approved temporary foreign worker applications even when businesses could not show they had tried to train their own employees or hire Canadians to do the job, his office said.

Instead, the department relied on information given to them by businesses to figure out whether hiring temporary foreign workers was necessary.

"We found cases in certain sectors—primarily caregivers, and fish and seafood processing plants—in which the department should have better questioned whether temporary foreign workers were filling real labour shortages," the report reads.

"In particular, there were indications that unemployed Canadians who last worked in a fish and seafood processing plant may have been available for work."

Ferguson's office looked at 136 application files from three random samples and found that 88 per cent had been approved.

Bureaucrats who assessed employer efforts to hire or train Canadians "generally accepted" their statements, the report stated, even in cases where Ferguson's office believed that the details provided by businesses "warranted further questioning."

They found that in 40 per cent of these questionable cases, bureaucrats did not sufficiently question employers.

"The information provided by these employers suggested to us that they had not made reasonable efforts to hire or train Canadians," the report said.

In one example, the auditor general uncovered a situation where someone had applied for a temporary foreign worker to be a caregiver for their elderly parent, even though they hadn't tried to hire a Canadian and their parent wasn't even living in Canada at the time.

The reason that person gave in their application was that they were looking for “someone who is trustworthy and with the ability to work without supervision.”

That application was "accepted without challenge" and approved, said Ferguson's report.

Other policies appear not to have been followed, according to the report. For example, while bureaucrats could ask businesses to carry out extra advertising if they conclude it would result in more Canadians being hired, Ferguson's office found "little evidence" of this request.

As well, bureaucrats "in many cases" said it was difficult for them to figure out if businesses were telling the truth about their recruitment efforts.

The department decreased the number of temporary foreign workers it had approved, from a high of just under 200,000 in 2012 to just over 90,000 in 2015. This was partly due to the 2014 Harper government reforms, Ferguson's office stated.

But the department didn't follow its own policy of making sure low-wage temporary foreign workers didn't take over bodies of workers, said Ferguson.

In one example, the department was supposed to lower the cap of how many temporary foreign workers could be hired at a business in proportion to the rest of its employees, from 30 per cent in 2014 to 10 per cent in 2016.

"The department did not fully implement this measure, because employers of fish and seafood processing plants in the Atlantic provinces stated that the cap had a negative impact on the sector," the report stated.

"The department therefore froze the cap at 20 per cent in June 2016 and provided a one-time cap exemption in 2016 to allow seasonal industries to bring in as many temporary foreign workers as were needed for up to 180 days."

In another example, bureaucrats could not match Employment Insurance data with Record of Employment data in order to figure out labour market shortages, the report found, because they were not being given access to all labour market information they needed.

Ferguson's office looked at hundreds of Record of Employment files coming from three fish and seafood processing plants over a three-year period, and found that "over 80 per cent of the Canadians they laid off had claimed EI at the same time as the plants were employing temporary foreign workers."

The department said it had "already" removed the restriction that limited bureaucrats' access to certain parts of this data.