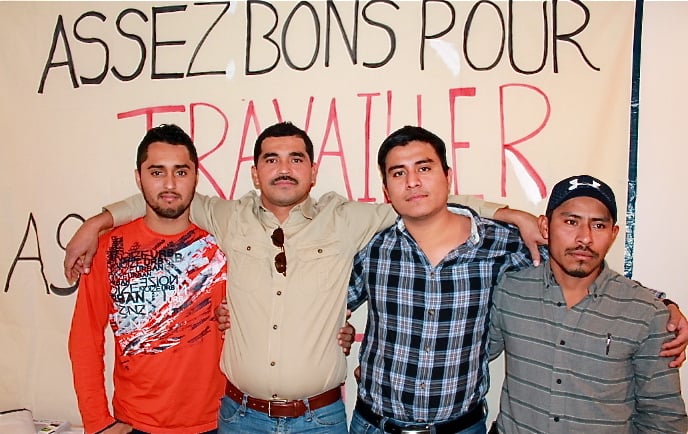 When Juan Antonio Godoy Enriquez was arrested by the Canada Border Services Agency at dawn, Oct. 26th, he was as worried as he was afraid.

Enriquez had come from Guatemala last Spring to work as a truck driver on a farm in Victoriaville, Que., under Canada’s Temporary Foreign Worker program.

His son weighed heavily on his mind. He came to work in Canada to send funds home to his family – wife and three children - for food and for medications for his 12-year-old son who had fractured his skull in an accident last Spring.

Now, he faced time in jail, loss of income, and deportation.

Enriquez is one of 15 migrant workers from Guatemala whose lawyer Susan Ramirez says are victims of fraud and labour exploitation. The 15 were all arrested and brought to the immigration detention centre in Laval, Quebec, after allegedly breaching their work permits.

They are all part of an existing federal program in Canada that forces temporary workers to stick with a single employer. But critics of the regime, including union leaders, community organizers and the migrant workers themselves, say abuse is rampant precisely because of this. Although the Temporary Foreign Worker Program is currently under review, anti-racist groups such as the Immigrant Workers Centre say workers will continue to be punished as long as the federal government fails to fix the problem.

Prime Minister Justin Trudeau's government has said it is still studying the issue.

But the critics have proposed solutions. Elimination of the rule tying work permits to a single employer was among 21 recommendations made in September by the House of Commons human resources committee to improve the Temporary Foreign Worker Program.

"'Tied' or 'closed' permits almost indentures a person to one employer, making it nearly impossible to change conditions of their stay – having to jump through bureaucratic hoops that are expensive and can take long periods to process," said Joey Calugay, a community organizer and coordinator of temporary foreign workers with the Immigrant Workers Centre in Montreal.

The centre is part of the Coalition for Migrant Worker Rights Canada, which spoke to the Liberal-led House of Commons committee on how to improve the program. In September, a joint statement from Employment, Workforce Development and Labour Minister Maryann Mihychuk and Immigration, Refugees and Citizenship Minister John McCallum said that the government would decide on the committee recommendations within four months. Lindsay Wemp, a spokeswoman for IRCC, said the department cannot comment further as the recommendations are under review.

The case of the 15 Guatemalan migrant workers is a clear example of the power structure created by the current type of work permit that stipulates they work for only one employer, Calugay said. "The program puts more power in the hands of private employers while states act like labour brokers," he added.

The workers decided to switch employers because they said they were mistreated at the farms they initially came to work for. They said they paid a placement agency, Placement Les Progrès Inc., owned by a Guatemalan Canadian, Esvin Cordon, to handle the required work permit changes so they could work for him.

“Some of them had no access to health care, others had a totally different salary that they had signed in their contract in Guatemala. I’ll give you an example, a young man who was hired for $10.50 per hour, when he got here he was told 'no, it's going to be $3.15 to catch 1000 chickens.' So it makes a big difference,” Ramirez, the lawyer for the 15 migrant workers, said at a press conference last week.

Ramirez said they switched to working directly for Cordon, who sent them to different farms.

Enriquez said despite signing up with Placement Les Progrès Inc., their conditions did not improve.

“After each business that we worked for, we worked like slaves and the salaries are not paid like we thought,” he said.

In an interview with National Observer, Enriquez said he was frustrated by Cordon. "I've only been deposited $300 per week [since working for him] and this is just enough for my personal expenses and to send a bit to my family. Just the meds of my son is $100 per month," he said, practically in tears.

Enriquez said he was a truck driver in Guatemala and came to Quebec to drive trucks but the job was planting crops. He decided to contact Cordon, who was recommended by Guatemalan friends who said his agency would offer a better salary and conditions.

Immigration, Refugees and Citizenship Canada confirmed that Enriquez came legally, arriving in Montreal's Pierre Trudeau Airport on May 31 with a contract as a farm worker.

Dominique McNeely, a communications director with the Canada Border Services Agency, confirmed through an email statement that it led an operation on Oct. 26, “at a Victoriaville job placement agency as part of an investigation on the employment of unauthorized workers.”

“Cordon said everything is legal, that we won't have any problems, that we can change employers…we trusted him to change our work permits legally. We paid $4,500 to pay for the transfers,” Enriquez said in Spanish, with a translator by his side.

Enriquez was released after nearly three weeks in jail. A church, Centro Cristiano Evangelistico, acted as a guarantor to pay his bail of $1,500 while his deportation case is resolved.

All the other migrant workers were released as of Tuesday. Their guarantors include Cristiano Evangelistico, the Catholic Church of Montreal, friends they made while attending mass in Victoriaville, and distant relatives. They posted bail for them and provide them with food and lodging.

Among the 15 arrested, two have already been deported to Guatemala.

Three other migrant workers who were released with Enriquez also spoke at the news conference. Two of them, Edson Vincent Perez Vasquez and Marvin Estuardo Diaz Perla, said they also sought out Cordon themselves after hearing from fellow Guatemalan migrant workers about him. They both said Cordon made false promises.

“With the payment for the work permit, then I can start to pay for my permanent residence. That was my illusion, to be able to bring my family here,” Perla said.

Ramirez explained how Placement Les Progrès​ Inc. worked: “So the modus operandi is they [the agency] take the workers, they bring them to the office, and three days later they ask for their passports and say that they need it to process the work permits. So the guys are deprived of their passports, deprived of their liberty. They cannot leave Canada if they want.”

A week later, the workers are brought to Montreal in groups to sign a document that allows Garsendy-Emmanuel Guillaume, an immigration consultant recommended by Cordon, to handle the transfer of the work permit, Ramirez said.

“It [the work permit change] was never done, and should be done before the worker changes employers,” she emphasized.

“So the guys are under the impression that everything is being done legally. But the most abhorrent part of this is they say they have to pay $4,500 to the immigration consultant when the processing of a work permit costs $155. So they say to help you reduce the weight of the expense, I will reduce it from your pay. So the guys work 85 hours of work or more per week and only receive $300 net pay [after the deductions],” Ramirez said.

She said that the migrant workers are victims of fraud, while the real culprits run free, “still defrauding other persons and nobody's doing anything about it.”​

Cordon's lawyer Lydie-Magalie Stiverne asserted that there was no foul play – that the workers signed a contract with Guillaume, not with Cordon himself, to handle the work permit transfers.

“Mr. Cordon advances the money to pay for the change of status and the workers agreed an amount of money would be withdrawn from their paycheck in order to reimburse the money that the agency advanced [to the consultant]. Because clearly, if they don't have the money, they won't see their status changed. And he'd rather see that their status changed and then he would have them [work for him].”

However, Stiverne refused to provide a copy of the contract between the workers and Cordon. Ramirez did provide a contract for one of the 15 workers – which states specifically that the “client”, that is, the worker, is seeking the service of Guillaume for the work permit change to Placement Les Progrès​ Inc. It is signed by Guillaume, Cordon and the worker.

She said Cordon endeavours to do everything legally because he owns a small company. “He finds the bashing of his reputation very deplorable,” she said. 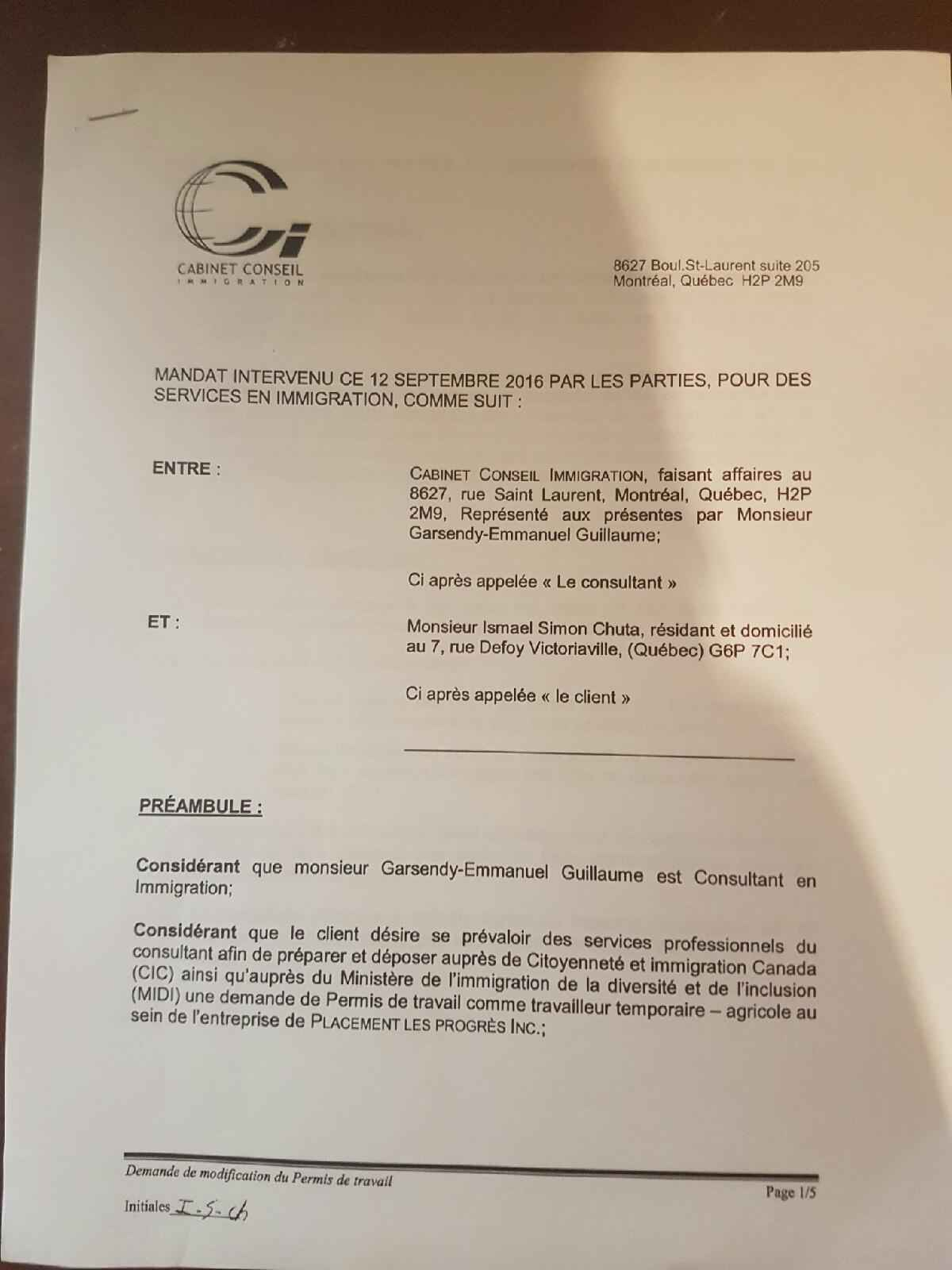 She also argued that Guillaume is not at fault either. “He did all the forms and so on and while waiting for the status to be changed, because it is administrative law, it takes some time, they [the migrant workers] were in the meanwhile arrested.”

Guillaume did not agree to an interview. Instead, he sent a press release written by Stiverne, echoing her response to the National Observer – that Cordon put the workers in contact with Guillaume but Cordon did not promise to process their work permits.

Ramirez also shared the CBSA's summary of the case with the National Observer. The last paragraph of this document stated that Cordon told all the workers that someone had started processing changes to their work permits, but the CBSA said it found no such application of any request for changes. The document was dated Oct. 27, 2016, one day after the arrest.

It also stated that the CBSA arrested Cordon based on "possible" criminal allegations. Ramirez said that Cordon was released 'under the promise to appear in court,' without bail – while the migrant workers were imprisoned.

Ramirez said some of the original employers of the migrant workers are responsible for what happened, on grounds they did not uphold their contracts. She highlighted the case of one worker, who had difficulties accessing healthcare when he got appendicitis although he was covered by Quebec's health insurance.

National Observer asked the CBSA and Immigration, Refugees and Citizenship Canada why the workers were facing deportation, sending consent forms signed by three of the migrant workers to look into the files. CBSA said it couldn't respond since the consent forms were only authorizing the immigration department to release information, while IRCC said on Wednesday that it was still working on gathering more details.

Jennifer Bourque, a spokeswoman for IRCC, stated in an email that there is a process in place for employers who fail to abide by conditions required to hire temporary foreign workers: "If an employer is found non-compliant, they can face monetary penalties, as well as bans from hiring foreign workers. Employers are also responsible for and can face consequences related to the actions of recruitment agencies that are acting on their behalf."

Ramirez said she plans to fight the deportation of all the remaining workers, arguing that they did not knowingly break the law and are victims of fraud and labour exploitation. She's also seeking open work permits for the Guatemalans. Enriquez hopes to not leave Canada feeling cheated. “We are dignified and respectable workers. We are not here to do harm to anyone...I believe this country will not leave us hopeless.”

Does Al Jazeera have fake news?