Greens to prop up NDP's Horgan in minority BC government 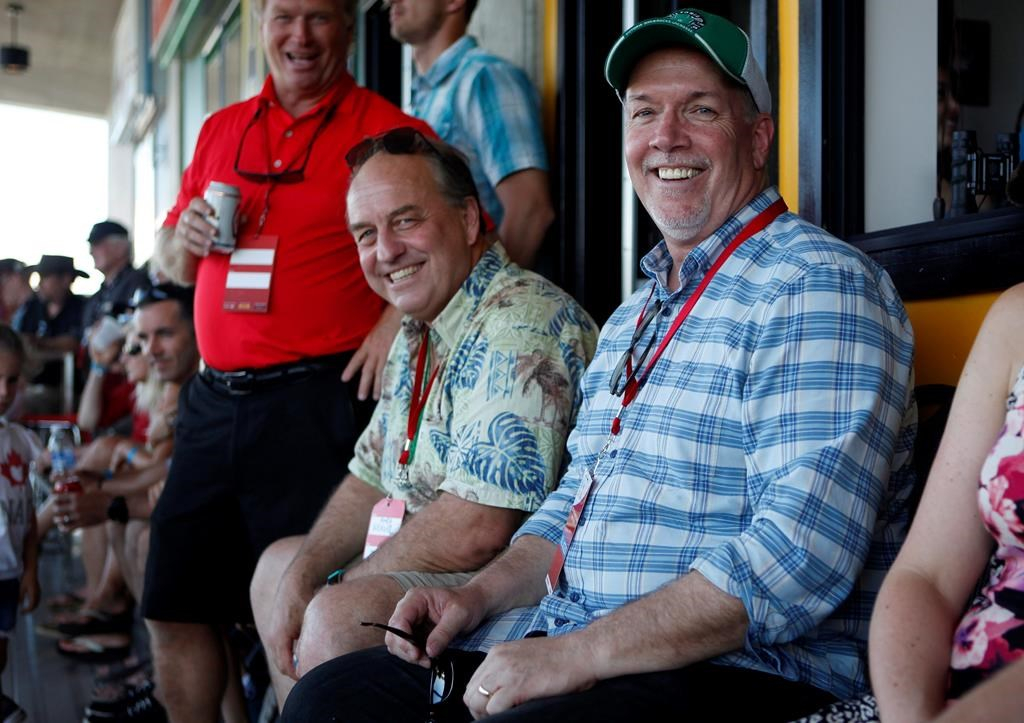 BC NDP Leader John Horgan and Green Leader Andrew Weaver announced a new deal to form a coalition government on May 29, 2017. File photo by The Canadian Press
Previous story
Next story

BC NDP Leader John Horgan and Green Leader Andrew Weaver have agreed to form a government to replace the administration led by Liberal Premier Christy Clark.

Weaver announced the deal Monday afternoon in a joint press conference after a weekend of talks that saw the two men watching a women’s rugby game together, following what they say was a coincidental meeting. An agreement to support Horgan as premier had been reached by the early hours of Monday morning.

“I have to say I got up with a bit of a spring in my step this morning,” Horgan said with a laugh.

Weaver said that he had enjoyed good negotiations with both the BC Liberals and the NDP, and found several commonalities with both parties.

“But in the end we had to make a difficult decision, a decision that we felt was in the best interest of British Columbians, and that decision was for the BC Greens to work with the BC NDP to provide a stable minority government for the four-year term of this next session,” he said.

He stressed that the deal will not create a coalition government, but it will allow the Greens to prop up the NDP as the governing party. Together, the 41 New Democrat and three Green MLAs form a majority voting block over the 43 Liberal members of the legislature.

Horgan said he will present the deal to his caucus in a meeting on Tuesday, but he felt certain it would receive unanimous support.

“This is an opportunity for people coming from an opposition perspective to bring new eyes to government,” he said.

The specific contents of the agreement will not be revealed until after the caucus meeting, but Horgan said it provides for “a government run by the BC NDP with support around the issues of supply and budgeting” — issues that could trigger a vote of non-confidence.

Despite the lack of details, there have been a few hints at the policy points that pushed the Greens to work with the NDP rather than the Liberals.

One of the key issues was shared opposition to Kinder Morgan’s Trans Mountain pipeline expansion project, which would triple the capacity of an existing pipeline to carry 890,000 barrels of diluted bitumen from Alberta to the B.C. coast, and increase local tanker traffic seven-fold.

“This issue of Kinder Morgan is one that was critical to us, and I think you’ll see that reflected in tomorrow’s announcement,” Weaver said.

Another point of agreement appears to be on the issue of electoral reform, although there has been some disagreement over how to bring about change. During the campaign, the Greens had promised to implement proportional representation if elected, while the New Democrats pledged to decide the question in a referendum.

But Horgan and Weaver appeared to be on the same page during Monday’s press conference, touting their deal as a model for voters of a reformed system.

“What better way to show that proportional representation could work than by showing that a minority government can and will work in the best interests of people,” Weaver said.

The two parties are also in agreement on banning corporate and union donations to political parties and limiting individual contributions.

After the election on May 9 ended without a clear answer on who would form the next government, Lieutenant-Governor Judith Guichon had asked Liberal leader Christy Clark to continue to govern as premier. Now Horgan and Weaver say they will present Guichon with details of their plan to wrest control of the province away from the Liberals.

But the ball remains in Clark’s court, according to David Moscrop, a political scientist at Simon Fraser University.

“The next move is Christy Clark’s. She essentially has two options here: recall the legislature, and have a go, try to pass her budget, or run” — as in, resign, Moscrop said.

If Clark resigns, Guichon will need a premier and will ask Horgan to fill that role, according to Moscrop. But if she chooses to force a confidence vote on the budget and loses, she could ask the lieutenant-governor to dissolve the legislature and call another election.

“I think the dignified thing to do is to resign,” Moscrop said. “She’s had a long career in politics, she was the premier of a province for four years and has a pretty successful record. If she wants to maintain her dignity, it’s time to move on. She can fight it out, but I don’t think she’s going to win, and it’s going to look nasty and petty.”

Earlier Monday, there was speculation on social media that Weaver had reached a deal with the BC Liberals, after party leader Christy Clark posted a video on Twitter with the promise: “Working to deliver a strong, progressive, stable government and the best deal for British Columbians.”

But in hindsight, Clark’s message looked more like an attempt to get out in front of the Horgan-Weaver announcement. Standing in front of Burrard Inlet in Vancouver, she said she saw a lot in common in platforms of the three parties, “but I also know that if we can come to an agreement with other parties in the legislature for four years of stability, that it’s going to be not a deal with political parties, it’s a deal with you, because you were the ones in the election who said you wanted us to do things differently.”

Weaver said the Liberals were informed of his choice Monday morning, and Clark had apparently tried to reach him again just as he was heading into the press conference.

Less than an hour later, Clark released a statement calling on the NDP and Greens to release details of their agreement to the public, saying that it could have “far-reaching consequences” for the future of the province.

“As the incumbent government and the party with the most seats in the legislature, we have a responsibility to carefully consider our next steps. I will consult on those steps with the newly elected BC Liberal caucus, and have more to say tomorrow,” Clark’s statement reads.