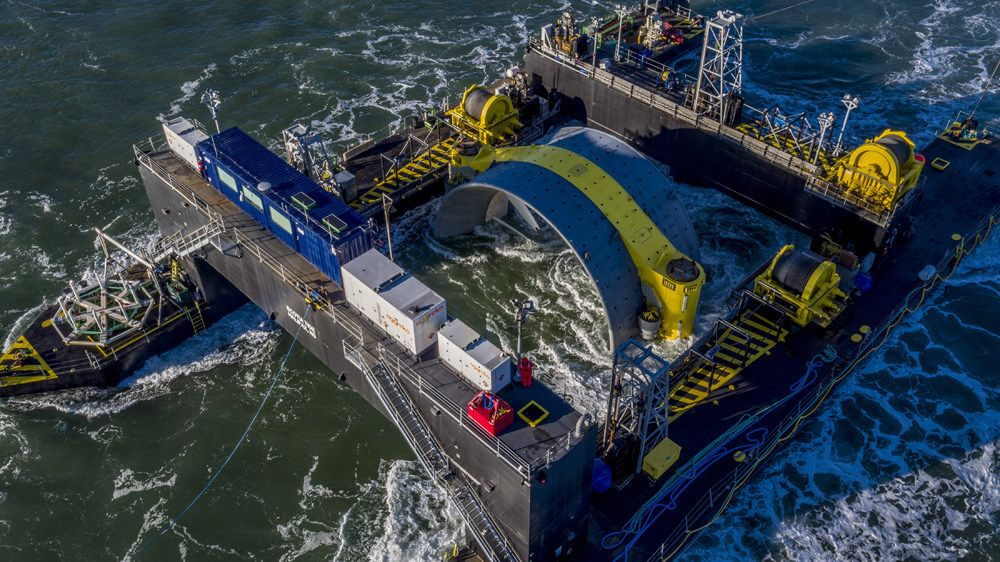 Engineers first tried to harness power from the tides of the Bay of Fundy in Nova Scotia in 2009.

That excitement didn’t last long however; the turbine blades were destroyed by fierce tidal flows in 20 days.

The second attempt to tap some of the awesome potential energy produced by the natural tides was launched last November. After much controversy, Cape Sharp Tidal Ventures (CSTV), placed a 1,000-tonne, five-story tidal turbine on the seabed of their company’s berth in the Minas Passage.

When the turbine is turning at full capacity, it produces enough power for some 500 homes.

Though the demonstration project has produced “fossil fuel free” renewable energy as promised, the debate on potential environmental costs is far from over.

Scientist Trevor Avery questions the adequacy of an environmental effects monitoring program (EEMP) initiated in 2009 by the Fundy Ocean Research Center for Energy (FORCE), the non-profit organization that plays host to the turbine demonstration projects.

The EEMP is continually adjusted, with current proposed monitoring plans projected until 2020. Each of several companies also has specific monitoring plans for their own individual project.

“The environmental effects monitoring plans (EEMP) for fish and lobster fall well short of their intended mark,” Avery told National Observer. “There’s nothing in there that’s of value to show the long-term and cumulative effects on fish or lobster populations right now.”

The EEMP was established to measure the impact tidal, in-stream energy conversion devices could have on fish, seabirds, marine mammals, lobster, marine noise, ocean bed habitats and other variables.

Avery is an assistant professor of biology, mathematics and statistics at Acadia University who specializes in fish habitat and several at-risk species in the Bay of Fundy, including the striped bass, the little skate and winter skate.

Fisheries and Oceans Canada has critiqued FORCE's EEMP, arguing that the baseline data is insufficient. That didn't stop Nova Scotia Environment Minister Margaret Miller, however, from approving it along with a second turbine, yet to be deployed.

In April, a Nova Scotia Supreme Court judge upheld the minister's decision, rejecting a request from 175-member Bay of Fundy Inshore Fishermen's Association to quash the go-ahead on grounds of gaps in baseline data about the ecosystem.

“The characterization of baseline data as being baseline, I think, is quite an extension of what it actually is,” Avery said. “What it is, is a series of preliminary studies that have given us insights into certain things that are happening.”

He cited a study used for baseline data which showed acoustically-tagged striped bass occupy the same part of the Minas Passage as the current turbine throughout winter as an example.

“What it doesn't provide us with is the baseline of how many of them there are, when they're actually there, why they're there,” Avery said. “What is their behaviour when they're there? Etcetera. So, the characterization of baseline data is a really a problematic thing in this whole argument.”

Matt Lumley, spokesman for FORCE, rebutted: “There is no such thing as obtaining a perfect baseline data, particularly from this site. This is due to the massive amounts of change that occurs on a regular and seasonal basis — not to mention the impacts of climate change.”

Melissa Oldreive, acting director of operations at FORCE, said in an interview that Fisheries and Oceans Canada has also said that because of the small demonstration scale of the project, “they don't anticipate significant harm or risk associated with it.”

“But they did point us to several areas that could help increase the research effort and increase the data being collected and the opportunity for data collection around that turbine,” she added.

Cape Sharp Tidal Venture (CSTV) and other companies lease their berths from FORCE, a non-profit organization financed by developers, the federal and Nova Scotia governments, and Encana. CSTV, a partnership between Emera and OpenHydro/DCNS, is the first of five companies testing the potential for producing renewable energy from in-stream tidal turbines in the Bay of Fundy.

In May, CSTV attempted to retrieve the turbine temporarily from the water for upgrades.

Nova Scotia Power, along with OpenHydro, deployed North America’s first one-megawatt in-stream tidal turbine in the Minas Passage in November 2009, but it only lasted 20 days. Its turbines could not withstand Fundy’s powerful tidal flows.

FORCE’s purpose is to see whether in-stream tidal energy technology could be a part of Nova Scotia’s future. The province has a mandate to produce 40 per cent of its energy from renewable sources by 2020. FORCE provides space, equipment and infrastructure necessary for tidal power companies and developers, and monitors interactions and potential impacts of turbines with the marine environment in the Minas Passage.

“While we are exploring this renewable energy source, it's all about responsible investigation of this: is tidal energy really and truly viable from a social, environmental, economic perspective in Nova Scotia,” Oldreive said. “That's really why FORCE exists.”

Avery notes how monitoring the impact of turbine-generated power is different from supervising traditional energy production in the ocean.

“This is not the same thing. This is very different. These are moving components with electrical interference and lots of sorts of activity in that area.”

FORCE has spent $15 million so far of its approximately $40 million budget, exploring life below the surface. It has and is continuing to research lobster, marine mammals, fish, seabirds, oceanography, sedimentation, and electromagnetic fields at its site near Parrsboro.

These monitoring programs were designed through an extensive consultation with leading experts globally on the best methods to pursue, given the unique nature of the Bay. Nova Scotia says tidal energy production has the potential to contribute $1.7 billion to the province’s economy eventually.

But some scientists, and others familiar with the Bay — including fishermen who rely on this ecosystem for their livelihoods — disagree with the esteemed label given to the current monitoring program and baseline data collected so far. Fishermen attempted to stall the project by taking the province’s original permit approval to court.

Both Fisheries and Oceans Canada and the province provided specific direction to FORCE last June. The EEMP must fulfill reporting requirements in line with acts of both of these bodies and a revised monitoring plan with their considerations in mind was mandated for Jan. 1, 2017. A quarterly report released in April includes this information.

“It's a really, really difficult road here that myself, and others, are trying to head down to say, 'Look, you know, everything you're doing is fine. It's not perfect, but it's not going to tell you what you want to know and what you keep telling everybody you're going to do,’” said Avery.

Regardless, given the territory, technology must be built, tweaked or configured to try to work – and withstand – Fundy’s high flow environment throughout this adaptive, ongoing process.

David Barclay is assistant professor, Canada research chair, ocean technology systems, at the department of oceanography at Dalhousie University. He said a company with which he recently worked on turbine-related technology is “trying to do a reasonably good job of figuring out, ‘can we do a better job of monitoring then just meeting the basic requirements of the EEMP?”’

“It's really about rising to the challenge of making a difficult measurement in a really harsh environment,” he said.

Black Rock Tidal Power leases another berth in the basin. It contracted the research to GeoSpectrum Technologies Inc., which shared funding with the Natural Sciences and Engineering Research Council of Canada.

His work shows the challenges of working in this environment. Acoustic monitoring is useful because it’s hard to see in the Bay’s murky water.

“You can't see very far in the Bay of Fundy water because it is very muddy and acoustics can 'see' much further,” said Barclay.

He suggests high frequency sonar should be able to detect tens to hundreds of metres out with low frequency, although he admits the exact length is unknown.

“It's kind of like if you took a microphone and stuck it out in a gale wind to try and hear someone singing in the distance,” said Barclay of a situation where the traditional performance of sonar isn’t up to par with the high noise levels of the turbulent waters.

“When you have really high flow it's more difficult for your system to be sensitive, but there's ways to combine data from different sensors to increase that sensitivity even in the presence of high flow.”

His ray consists of an array of hydrophones, whereas current industry standards are singular.

Tech can be applied outside Bay of Fundy

Barclay confirms the ray does a better job than old equipment of listening for both the turbine and marine life. He was writing a report of this research to GeoSpectrum and as a paper for academic literature.

“It truly is not just an operational product, but it's a bit of original research and you know it’s a bit of original technology that will help strengthen our ability to do this work in Nova Scotia and also around the world,” he said. “This idea of in-stream tidal, you can implement in places where there are tides that aren't as big. Just as long as you have currents that are flowing you can stick a turbine in there and get energy.”

Sarah Dawson, a spokesperson at CSTV, said studies of tidal turbine-generated power in other parts of the world show absolutely no evidence of environmental harm “but we also have to prove that to Nova Scotians as well.”

Dawson said the company is monitoring interactions between fish and mammals and the turbine as well as the impact of operational sound. She said it is early days in exciting research that includes the constant improvement of monitoring technology.

Avery also offers advice: to use integrated population models as the basis for this project’s related environmental studies.

“The solution is, in my mind, you have to do consistent long term monitoring with an overarching plan,” he said, explaining that an ecosystem model could be created and all data collected could be plugged into it. It could also showcase helpful historical information about the area.

“The problem is that you have to keep sampling. You have to sample a lot, and over many years, using very similar techniques,” he said. He explains that you need to know what the effects other aspects of the environment, such as fishing, temperature variance, or food availability, may have on the areas being monitored, in order to then look at the effects of the turbines. This is the way to properly monitor fish species, he said.

“You have to look at what's happening with the trends in the system and that way you can tell whether you're having some sort of an effect or not,” Avery added. "Nobody is responsible for the far field or the cumulative effects and this is where we're going to see, over time, the changes in these populations ­– if in fact they are occurring."

“Part of the monitoring is to understand if there is an impact, if it is significant or not," said Oldreive, the acting director of operations at FORCE. "That's a conversation that Nova Scotians will have to have. All activities humans do have impact.

"It's about acceptability really. And then in terms of mitigation, that's part of the monitoring problem: to understand that. The demonstration nature of the program is designed to limit impacts by being such small scale in the grand scheme.”