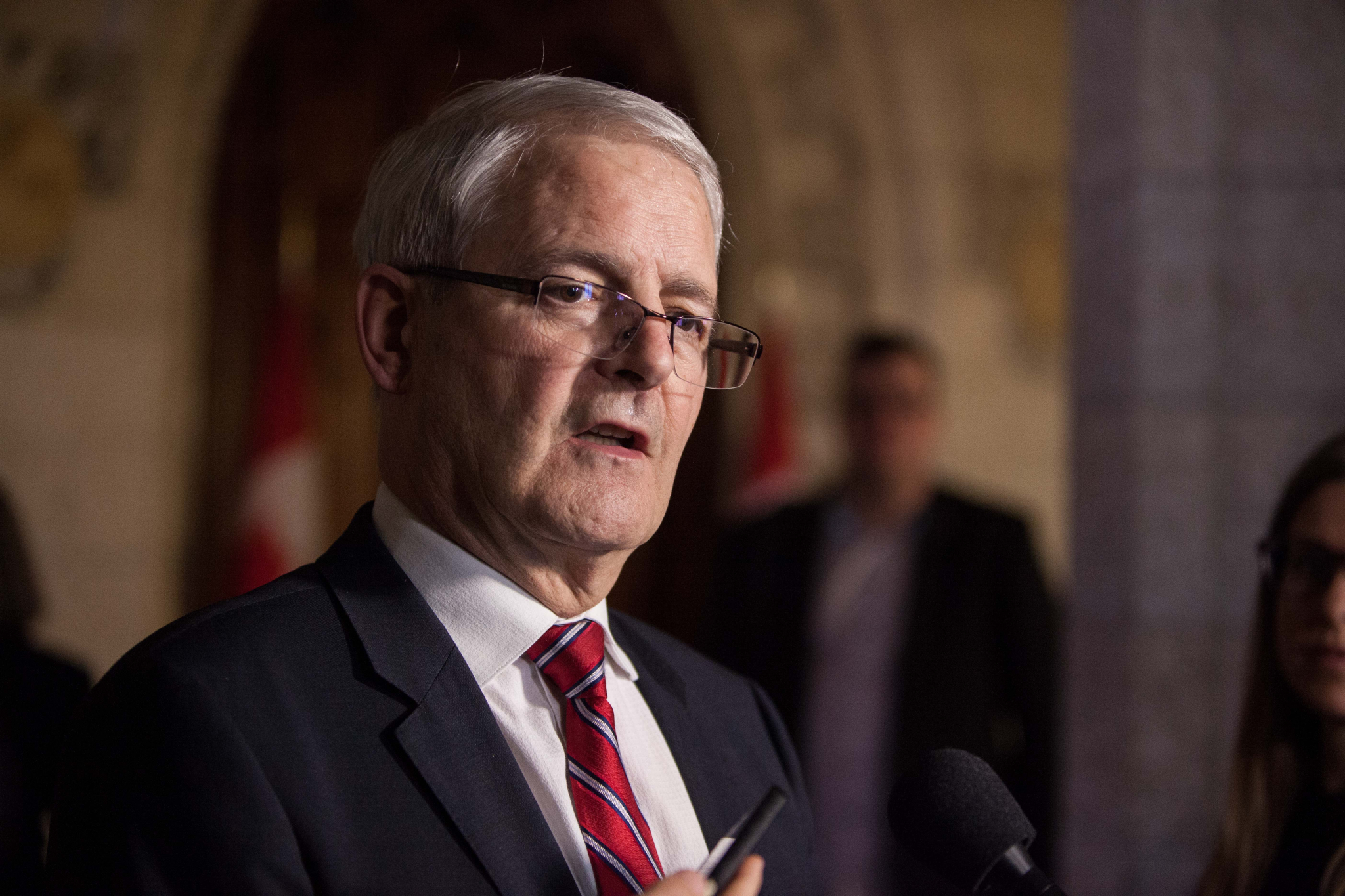 Transport Minister Marc Garneau on Parliament Hill in April. Garneau is at the centre of a battle over whether to legally require automakers to sell a minimum amount of zero-emission vehicles. Photo by Alex Tétreault
Previous story
Next story

The Trudeau government is considering a law that would force automakers to sell more electric cars, says the federal Transport Department.

The statement appears to contradict earlier remarks made last month by Transport Minister Marc Garneau, at a Montreal electric car show, about setting a legally-binding target for a "specific number" of zero-emissions vehicle sales. Such laws already exist in California and Quebec, and are designed to boost adoption of electric vehicles.

Scientists say the planet will require rapid vehicle electrification in order to reduce pollution that can cause dangerous changes to the climate.

Catherine MacPherson, regional communications advisor at Transport Canada, said in an emailed response to questions that the minister’s comments were “expressing his preference."

A federal advisory panel is expected to produce recommendations on the matter by fall.

MacPherson's comments also come on the heels of a new report that urged the Trudeau government to adopt just such a legally-enforced federal mandate—a move opposed by some industry groups.

“The industry will fight against more regulation and more constraints,” predicted Sidney Ribaux, executive director of the Montreal-based ecological and social non-profit Equiterre, which released the report.

“But once they have a clear signal and they know how to plan for it, they’ll figure out a way to move their business forward within that regulatory environment.”

Canada’s transportation sector makes up about a quarter of nationwide carbon pollution and Canadians have put a fifth more cars on the road over a decade.

Canada has committed to developing a national strategy by 2018 to increase the number of zero-emission vehicles on Canadian roads. Sales mandates of electric vehicles, which the International Energy Agency (IEA) has endorsed, are “fundamental” to achieving this in a substantial way, said Ribaux.

But some manufacturers and auto dealers have battled against such a law in Quebec.

Since last October, the province has mandated that 3.5 per cent of its auto sales must come from zero-emissions vehicles for the 2018 model year. The proportion rises in subsequent years and the law puts in place a system where automakers that don’t meet targets can buy credits from others that do.

While Ontario, Quebec and British Columbia are offering tens of thousands of dollars in government rebates per customer for the purchase of new electric vehicles, and Ontario’s climate change plan establishes a five per cent sales target province-wide by 2020, so far only Quebec has a legal mandate enforcing compliance.

“From our perspective, there are probably better ways to put more zero-emission vehicles on the road,” said David Adams, president of Global Automakers of Canada.

Garneau said at the Montreal car show that the government’s aim in pursuing its electric-vehicle strategy was to make “conditions more favourable” for sales, “instead of giving ourselves a specific number.”

That made some in the industry conclude that Garneau had shut the door on a sales mandate.

MacPherson said Garneau preferred "other instruments in order to achieve the desired objectives." But she acknowledged that the strategy being developed by a 22-member advisory panel, announced May 26, would "need to address the question of vehicle supply."

“We need to look at all the options in order to be able to assess this,” she wrote.

The advisory panel includes representatives from vehicle manufacturers, automotive dealers, universities, non-profits and others, including Equiterre, the auto dealers association and the global automakers group.

Ribaux said the panel is stuck with a short term which requires recommendations by fall. Public servants have suggested the panel break into subcommittees before proposing a comprehensive strategy to the government, he said.

Equiterre’s report, “Accelerating the transition to electric mobility in Canada,” researched in collaboration with Simon Fraser University, looked at multiple scenarios for the future of electric-vehicle policy in Canada.

The report concludes that demand-side tools alone, like subsidies or new charging infrastructure, are not sufficient to increase use of electric vehicles rapidly enough.

With current policies in place, including subsidies, plug-in electric vehicles won’t achieve more than between six and 17 per cent market share by 2030, according to Equiterre.

Even with more powerful nationwide incentives, like a hypothetical $7,500 rebate per plug-in electric vehicle Canada-wide from 2018 to 2021, new market share would still only reach between four and 13 per cent in 2022.

“It’s one thing to put forward rebates, but what we know historically is that rebates will never last,” said Ribaux.

Only with a mandate forcing automakers to sell a minimum number of electric vehicles, the report concludes, can Canada achieve market share of 30 to 48 per cent by 2030.

“Targets are important in the policy-making process because they help move the focus of the discussion to policy implementation and capacity building,” says a 2017 IEA report on electric vehicles.

Electrifying transportation is important because the sector is responsible for almost one quarter of all global greenhouse gas emissions, according to the UN. It's also growing faster than any other sector where energy is end-use.

Greenhouse gas emissions from Canada’s transportation sector also represent roughly a quarter of all national emissions, and Canada’s total vehicle fleet has increased by 19 per cent since 2005, according to government statistics.

The fact that switching to electric cars can drive down emissions isn’t widely known, according to a survey by Toronto-based electric vehicle non-profit Plug’n Drive.

Its May 29 survey of drivers in and around Toronto found that while over 70 per cent of gas-powered vehicle owners knew fossil-fuel burning transportation contributes to climate change, “barely half” thought that switching to electric vehicles would help mitigate global warming.

Industry representatives said they don’t think the government should be dictating what manufacturers and dealers can sell in a free market.

Adams said the market has “migrated” towards light-duty trucks and crossovers, which are sport-utility vehicles (SUVs) with car bases.

The cost of putting large batteries into those types of vehicles to meet consumer demand and yet comply with zero-emissions rules, he said, “would be so significant as to probably make it not viable in the marketplace.”

“You have the market going in one direction, and the current availability of zero-emission vehicles being in a segment of the market that is, if anything, shrinking, not growing,” he said.

The province was “pursuing a very aggressive zero-emissions vehicle mandate, which in our view is almost certain to fail,” he said.

But Ribaux argued that the industry was promoting the status quo in advertisements, depressing potential consumer demand, because manufacturers make more profit on large, gasoline-powered vehicles.

“This is an industry that basically introduces a model of a car, and then spends 20, 30, 40 years reimbursing the research and development that went into developing that model,” he said.

“If you’re seeing ads for pickup trucks every single day, and you’re being exposed to hundreds of ads that are basically telling you to buy SUVs, then it’s not surprising that consumer demand is tilting towards SUVs,” he said.

Canada’s greenhouse gas inventory report shows that emissions from SUVs, pickup trucks and minivans skyrocketed 101 per cent between 1990 and 2015 in Canada.

These types of vehicles emit on average 31 per cent more greenhouse gases per kilometer than cars, it said.

The Plug’n Drive survey also found that whether or not a driver owns an electric vehicle has little bearing on the distance driven, seemingly debunking the idea of “range anxiety,” or the idea that a battery-powered car wouldn’t have enough energy to fulfill a driver’s needs.

The price for a litre of

The price for a litre of gasoline is to low; hike the price of fuel at the pump and people will switch back to smaller vehicles. Use those taxes to finance public transit, it would be better for the environment and people's health (thousands of people around the world die prematurely because of air pollution).
GHG emissions from light trucks have doubled since 1990 from 22 Mt to more than 50 Mt in 2014, which has more than offset reductions in passenger car emissions from 52 Mt in 1990 to 36 Mt in 2014. Total Canadian GHG emissions have increased at an average annual growth rate of 0.7% between 1990 and 2014. GHG emissions from the transportation sector, the largest after the oil and gas sector, have increased at an average annual rate of 1.1%, and accounted for roughly 23% (171 Mt) of total Canadian GHG emissions.
(source: National Energy Board Market Snapshot, 2016-07-14: "Increased GHG emissions from the transportation sector reflect major consumer and business trends")
Based on Natural Resources Canada data on tailpipe CO2 emissions from various transportation fuels, a compact car that used regular gasoline emits around 3.5 tonnes of CO2 every year (based on 20,000 km/year). A pickup truck emits more than 5.4 tonnes of CO2 for the same amount of km driven in a year.
For vehicles using diesel, its around 4.1 tonnes of CO2 for a compact car, and 6.7 tonnes for a pickup truck (in 2015, per capita GHG emissions in Ontario were at around 12 tonnes).
In 2015, net sales of gasoline and diesel in Canada (net sales represent the amount of taxable fuel actually consumed on public roads in Canada) were 42,563,098,000 litres and 17,988,762,000 litres respectively. Alberta's CO2 emissions from diesel represented more than 42% of all the province emissions from motor vehicles.
Burning diesel produces another very harmful gas for people's health, nitrous oxide (N2O). Exposure to nitrous oxide causes short-term decreases in mental performance, audiovisual ability, and manual dexterity. Long-term exposure can cause vitamin B12 deficiency, fertility reduction and can have adverse effects on the developing fetus.
Nitrous oxide is now also considered as one of the single most important ozone-depleting substance emission and is expected to remain the largest throughout the 21st century.

Do we really want our leader

Do we really want our leader to have dictatorial powers? In what way is that conducive to a strong democracy?