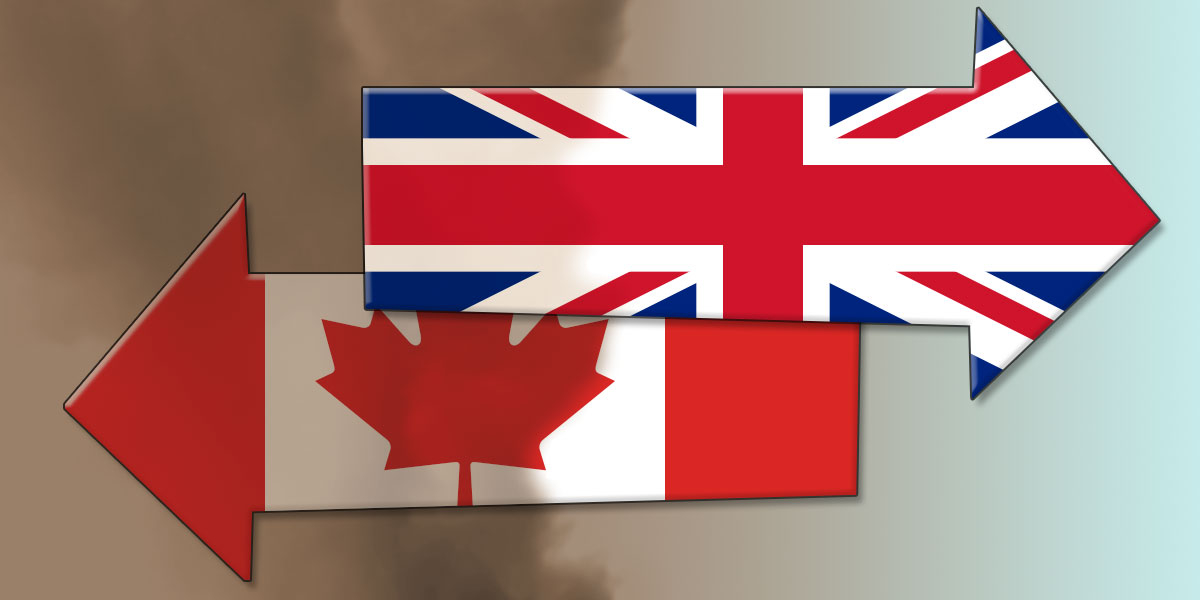 Two nations. Opposite tactics, opposite results. As the United Kingdom racks up climate wins, Canada might want to be taking notes.

Consider how divergent our results have been since 1990:

These dramatically opposite results came from dramatically opposite approaches to climate policy. The U.K. started much earlier and has been consistent. To ensure they meet their global commitments, they enacted a "Carbon Budget" law requiring government to meet annual climate targets starting with 2008.

Canada, by contrast, started late and has been erratic. And the Canadian government isn't legally required to ever meet any targets or to pass any climate laws. It shows.

Are we ready to try something different in Canada? And if so, should we adopt tactics from across the pond?

To illuminate the two different climate paths, I've put together a visual tour through the numbers. After that, we'll look at some of the tactics the British have used to help deliver climate success.

To start with, it helps to know that the U.K. economy is a trillion dollars larger than Canada's and they have nearly twice as many people. Usually, a much larger economy and population means lots more climate pollution as well.

As my chart on the right shows, we've traded places. Canada is now the nation polluting 200 million tonnes more than the other.

See that falling blue line? That shows the U.K.'s falling climate pollution over the last 25 years. They now emit 300 MtCO2 less each year than they did in 1990.

In fact, they've been so successful that they are already back to their 1894 level of climate pollution. Yes, 1894.

The red line, in contrast, shows that we Canadians have done the opposite. We've allowed our climate pollution to surge upwards by… a lot. An extra 110 MtCO2 per year to be exact.

And the economic winners are…

Surely cutting all that climate pollution ruined the U.K. economy?

No. The opposite happened.

Since 1990, the average Briton grew richer faster than the citizens of any other G7 nation, Canada among them. So says a new report from the U.K.-based Energy and Climate Intelligence Unit.

As my chart on the right illustrates, the British saw their GDP rise 44 per cent per capita while ours rose seven per cent less. Apparently, being a good climate citizen doesn't require trashing your economy.

The British have reaped another huge economic benefit by slashing emissions — the "carbon efficiency" of their economy has surged.

As the next chart shows, the U.K. now produces an enviable $5,000 in GDP for every tonne of climate pollution (tCO2). In contrast, Canadian foot-dragging has left our economy unable to produce even half the U.K. amount. Just $2,100.

The British made a rapid sprint forward in the race for low-carbon prosperity while Canada fell even farther behind. Sadly, we are in last place among G7 nations and we even make 15 per cent less than the global average per tonne of CO2.

Well… if nations can freely dump unlimited climate pollution, it doesn't matter. But in a carbon-restricted future, "carbon efficiency" will separate economic winners and losers.

The "carbon efficiency" of our economy doesn't get much coverage in the public discussion. But economists certainly understand how critical it will be. And our kids won't be happy when we hand them an economy that chokes and withers under carbon restraints. Which is exactly what we're doing.

For those interested in learning more about how our economy stacks up to other nations on this, and what it means for our future, I recommend following the annual "Low Carbon Economy Index" reports by PricewaterhouseCoopers.

Another way to measure a nation's climate progress is to look at how much climate pollution is emitted per person.

Over the same years that the British have been getting richer faster, they've also been leading the G7 in reducing their carbon footprint per capita.

In fact, the Brits managed to cut their per capita climate pollution almost in half during those years. They now are below eight tCO2 per person and rapidly approaching the global average of six tCO2.

Canadians, in contrast, are still pumping out more than three times the world average: twenty tonnes per person each year.

Our carbon footprint is shrinking so slowly that it will take us centuries to get down to a safe level. On a pollution path like that, major ecosystems like coral reefs will be long gone and parts of our planet will have become uninhabitable.

I don't know about you, but I'd rather we start honouring our climate promises instead.

Both the U.K. and Canada have made a series of high-profile climate promises, starting with commitments to the Kyoto Accord 20 years ago. How's that worked out?

My next chart shows these big international climate commitments as bullseyes — red for Canada and blue for the U.K. It also shows our actual emissions as red and blue lines.

You don't need to be a policy wonk to appreciate what's happened...

As you can see, the U.K. has done even better than it promised in the Kyoto and Copenhagen accords. The U.K. climate pollution has fallen 38 per cent since 1990. And estimates by Carbon Brief show U.K. pollution plunged yet again in 2016; it's now down to 42 per cent below 1990 levels.

Canada? Well… the red bullseyes show much weaker promises. And the red line shows Canada never really tried to meet them. Instead our governments have perfected a four-step shuffle:

The result of our responsibility-free approach has been an 18-per cent increase in climate pollution in Canada since 1990. After two decades of promising, we aren't even headed in the right direction yet.

But isn't Canada getting on track now?

The current Liberal government is working on a plan to get there. But so did previous governments, both Liberal and Conservative. Where Canada keeps failing is in turning good intentions into actual laws in a timely way. Canada is still a very long way from doing it.

To illustrate, I've updated my last chart. See that dotted red line in the top right rising to 2030? That's our government's latest projection for where our existing climate laws are taking us. On track?

What about all the great new climate proposals the government is working on? Well, the next chart shows these as red and grey wedges. The red wedges are hoped-for reductions inside Canada. The grey wedge is hoped-for "offsets" purchased from the USA.

The first thing to note is that even if they all became law, we still won't be on track.

And there are several reasons to worry that we won't even get that far:

That's a lot of hurdles and uncertainty between good intentions and getting on track to meet our climate promises. Given our poor track record and our continued lack of any legal requirements for our government to act, it seems foolhardy to count all those chickens until they hatch.

Now let's switch gears and take a look at how the British do things differently.

"We were right and the doom-mongers wrong"

One of the early architects of Britain's climate efforts was Michael Howard, the former U.K. Environment Secretary who negotiated the original UN climate convention back in 1992. Here's what he told The Guardian about the keys to the U.K. success so far:

"I would argue that there are three principal factors why Britain tops the G7 league in terms of growing our economy while reducing our carbon emissions. We started earlier than most, we have been consistent, and we have used market forces wherever possible.

"Certainly our decision now looks to have been a prudent investment. British companies in low-carbon goods and services already turn over an estimated £83 billion per year.…"

For Canadians, £83 billion works out to $146 billion — four times the gross revenues of our oil sands industry last year. Howard continued: "…unchecked, climate change presents unacceptable risks for the future. Fortunately these are not risks that we have to take. Britain has proved the doom-mongers wrong: economies can thrive while emissions fall."

To ensure it would continue to reduce emissions and meet international climate commitments, the U.K. legislated a policy approach they called simply "The Carbon Budget".

Here's an excellent summary of it by Ontario's environmental commissioner. I've added bold to emphasize features that are the opposite of what we do in Canada:

"The U.K. sets legally-binding five-year carbon budgets, which limit the U.K.’s total GHG emissions for the five years. Government has to keep total economy-wide GHG emissions within that carbon budget, by whatever means it chooses.

"Critically, each carbon budget must, by law, be approved twelve years in advance, based on a public recommendation from an independent and highly respected Committee on Climate Change. The Committee consults broadly and assesses, by sector, what can be achieved to reduce emissions at least cost, taking account of available technologies and government policy."

"This program limits political interference in the carbon budget, and gives both the public and private sector enough time and predictability to plan and invest in the necessary facilities and equipment. It also reduces cost, by allowing facility owners to plan now to replace high carbon capital assets as opportunities arise."

"A program of total carbon budgets also focuses attention on what really matters, cumulative emissions and not simply the emissions in a particular target year."

I've illustrated the U.K.'s five carbon budgets on my chart, below. There is one blue box for each five-year budget. The width of each shows the years it covers. The height of each shows the level of emissions allowed on average each year. If emissions are too high in one year, then they must be lower in a later budget year to compensate. This requires government to be responsible for all emissions in every year. 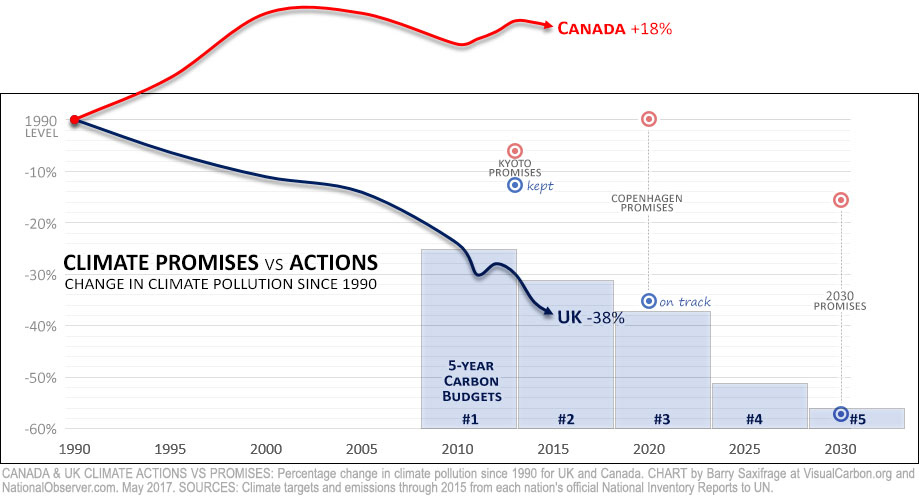 As boring as it may sound, a legislated process like this for climate policies — with details like budgets, deadlines, policy certainty and non-partisan commission — can make the difference between climate success and failure. All governments face pressures to delay and water down climate efforts. Having a legislated process that requires staying on track can tip the balance towards climate success.

We don't have one in Canada. And we keep failing badly. The U.K. created one to ensure they meet their targets. And they keep succeeding.