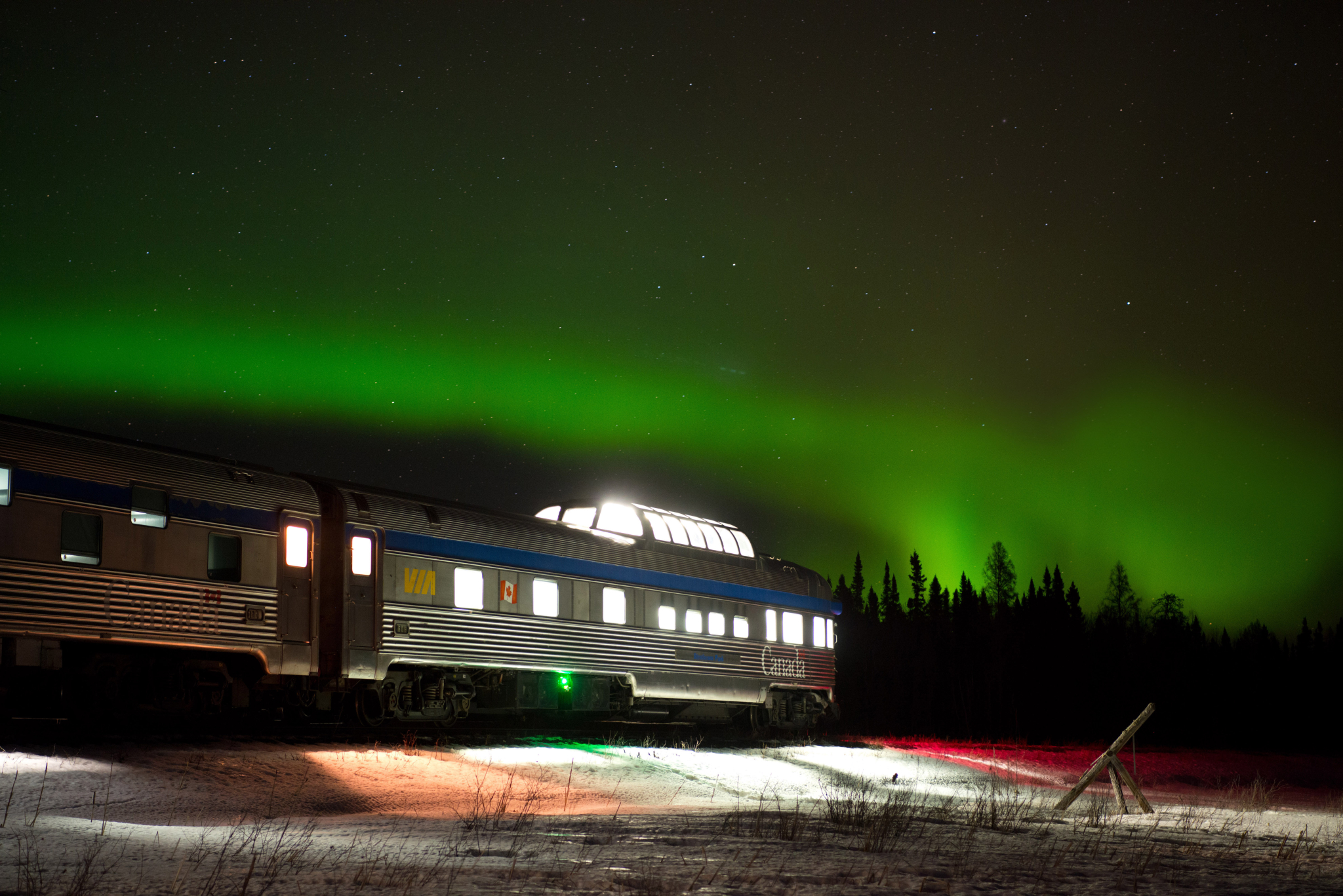 A VIA Rail train runs the Winnipeg-Churchill route beneath a glowing green Aurora Borealis. File photo courtesy of VIA Rail
Previous story
Next story

Joe Stover worked at the Port of Churchill for a decade. Since the port’s abrupt closure in mid-2016, however, he said he's found odd jobs to keep him going.

But the cost of living in Churchill, Man. has only got a “whole lot worse” since May 23, he explained, when OmniTrax Canada suspended all use of its Hudson Bay Railway rail tracks to the town after catastrophic flooding damaged at least five bridges and washed away 19 sections of trackbed.

That means all food and fuel must be flown in at a significantly higher cost than usual.

“We’ve never dealt with anything like this before,” Stover told National Observer. “We’ve had the rail line since 1929, and people who have been around for a lot longer than I have, have said this is unprecedented.”

The water levels have since receded, but Omnitrax has predicted that rail service may not return until the winter, perhaps even the spring of 2018. Omnitrax is one of North America’s largest private railroad and transportation management companies. It's hurting people in Nunavut, too, where some residents get food shipped from Churchill via barge, as it's normally a lot cheaper than in their local communities.

“It’s impacting every bit of our lives,” said Grant MacNeil, executive director of the Churchill Northern Studies Centre. “Even silly things. I went out to barbeque the other night on my charcoal barbeque and I was like ‘Ah, crap, the weather’s getting nice and this is going to be my last barbecue of the summer because I’m not going to be able to afford to get charcoal.’”

Food and fuel are already notably expensive in the northern city of Churchill, known around the world for its resident polar bears and beluga whales. Stover said under regular circumstances, gas hovers around $1.90 a litre and a head of broccoli costs about $8.50.

MacNeil said the cook at the Churchill Northern Studies Centre recently calculated that it would cost an additional $15,000 to $20,000 to ship the same fresh produce up this year that they did last year. Now, the centre is asking people who are travelling to Churchill for learning programs or research to bring fresh produce for them in their extra baggage space.

Tourism is likely to be affected by the rail closure as well — a serious concern given that Churchill relies on the sector, especially during the summer months. Local business owners have already started laying off workers, and many tourists were expected to visit Churchill in July using the VIA Rail’s Canada 150 Youth Pass, created to celebrate Canada's 150th anniversary.

Grant MacNeil said that two groups have already cancelled their reservations for accommodation — equivalent to about $12,000 in revenue for the fee-for-service centre — because they can’t afford to fly up. While the Thompson—Churchill trip costs about $120 return per person on VIA, it’s around $700 return per person on Calm Air.

He added that a lot of the people missing out on the trip are K-12 students who have been fundraising all year for the trip.

“Not many schools can eat that increase,” he said.

Trish MacNeil (no relation to Grant) recently spent 13 hours online to buy Canada 150 Youth Passes for her two daughters. The plan was for the 16-year-old to fly from Toronto to Vancouver to meet her 25-year-old sister, and take VIA from there to Churchill.

“We’ve booked hotels,” MacNeil said. “They wanted to go and swim with the belugas and hopefully see a polar bear. You know, just have the Canadian experience. Now, that’s not going to happen.”

A VIA spokeswoman said the service "will resume its services between Gillam and Churchill once inspections of the railway have been completed and the track is back in operation. To date no information regarding when the rail line will reopen has been provided."

According to VIA's latest annual report, almost 30,000 passengers travelled in 2016 on the Winnipeg—Churchill line, which contributed $3.7 million in revenue for the company. However, VIA received significant financial support from Transport Canada, resulting in an almost $600 per passenger subsidy for the line that year.

Locals, including Stover, have called on the provincial and federal government to treat Churchill as a “fly-in community” and provide subsidies for essentials. So far, there hasn’t been any public action announced.

In response to questions from National Observer, Clay Cervoni of Transport Canada wrote: "Transport Canada has been advised by Hudson Bay Railway that a third party engineer has been retained to assess the track condition."

Paul White, a spokesman for Manitoba Infrastructure, said the deployment of disaster financial assistance is “still being assessed.” On June 9, the province released a statement that it “continues to be actively engaged with affected stakeholders in northern Manitoba to ensure essential services are in place.”

“To us, that’s just a bunch of legalese and government talk,” Stover said. “There’s nothing really practical that comes from that.”

"It’s a national disgrace," she told National Observer. "Obviously provincial and federal intervention is required immediately. For the last year I’ve been joining with many others in advocating that the federal government take over the rail line and the port, and get it out of the hands of OmniTrax, which is in many ways holding the community and our region hostage.”

The Denver-based rail company has been criticized in recent years for allegedly under-investing in the railroad despite significant public funding, and increasing port fees shortly after shippers received export subsidies from the government. It’s currently in the process of attempting to sell the rail line and port — something MacNeil of the Churchill Northern Studies Centre said is “the best hope for getting it fixed.”

Ashton suggested OmniTrax “may be taking advantage” of the situation in attempt to get more public funding, which she called “disgraceful.”

OmniTrax did not respond to a request for an interview by publication time.

On Monday, media reported that a $17-million Arctic climate change study that was to conclude in Churchill was to be cancelled due to hazardous conditions from unprecedented sea ice levels off the coast of Newfoundland.

David Barber, principal investigator of the study and Canada Research Chair in Arctic-System Science at the University of Manitoba, said in an interview, “it’s kind of ironic that one end of the research program was impacted by climate change increasing ice hazards off the East Coast, and the other end of it was impacted by the closure of the rail line up to Churchill, both of them being created by climate change.”

MacNeil said the construction of a marine observatory has also been put on hold because materials can't be delivered by rail.

Barber added the recent flooding is very consistent with climate change predictions, which include more intense and longer rainfalls over the continents at southerly latitudes. The hydrological cycle is expected to become much more intensified because of climate change.