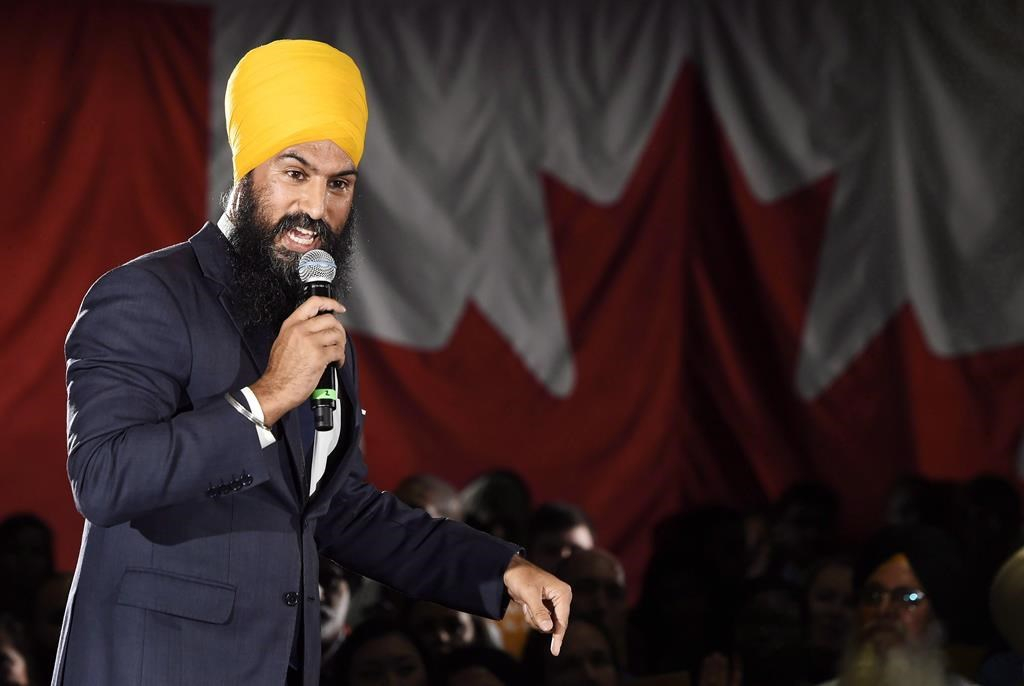 Singh came under fire from other leadership contenders during a debate last Sunday in St. John's, N.L., when he did not definitively spell out a position on Kinder Morgan, noting he wanted to consult party members in B.C. and Alberta.

The Ontario MPP now says Canada needs to commit to the United Nations Declaration on the Rights of Indigenous People, adding this means saying no to both Kinder Morgan and Energy East.

"This is why we must oppose the proposed expansion of the Kinder Morgan pipeline and the building of the Energy East pipeline," said his policy document — a copy of which was provided to The Canadian Press.

"Not only does significantly increasing oil production and international oil exports through these pipeline projects undermine our efforts to reduce our emissions, but it conflicts with UNDRIP."

Singh was not available for an interview on his climate plan but in a statement, he said he thought the debate was too focused on pipelines.

"The only true test of a climate change plan, after all, is whether carbon is going up or down. A commitment to UNDRIP played a profound role in my decision. First Nations opposition to the Kinder Morgan expansion was decisive for me."

"We have a situation where British Columbians have said no. We have the federal caucus who has said no. There is a very clear consensus among New Democrats," Julian said during the last debate.

Singh's plan, which includes a host of other proposals, also pledges to reduce carbon emissions to 30 per cent of 2005 levels by 2025 — five years ahead of the current target.

In May 2015, the Liberal government announced its plan to reduce greenhouse gas emissions to that level by 2030.

To meet his goal, Singh suggests measures including the adoption of a national public transit strategy, working with the provinces to help phase out coal by 2030 and implementing a green levy on high-emission vehicles and investments in electric charging station infrastructure across Canada.

Singh is also pledging to create a climate change action officer who would be mandated to report on emission reduction progress.

Erin Flanagan, director of the Pembina Institute's federal policy program, who reviewed Singh's plan, said the pan-Canadian framework delivered by first ministers included a chapter on oversight and accountability, adding it didn't provide much detail on how this would happen.

Flanagan welcomed the idea of creating a climate officer.

"I would love to see that person ... empowered to talk to provinces and territories and indigenous governments and do some of that work of ensuring the policies we have in place are working — that they're cost-efficient, that they are not having negative impacts in any way ... and to also spur governments to bring more to the table," she said in an interview.

Earlier this week, Angus also released his climate change plan that proposed a carbon budget — a legislative framework to place a hard cap on emissions over a five year period.

He said his plan will also eliminate federal subsidies to the oil and gas sectors and replace them with financial incentives to industry to reduce their emissions.

"The government's own documents show we are nowhere near meeting our international commitments," Angus said in a statement released Thursday.

"So instead of repeating a pattern of failure, let's look to jurisdictions that have implemented successful steps towards reducing carbon levels. The United Kingdom has been using the carbon budget model successfully since 2008."