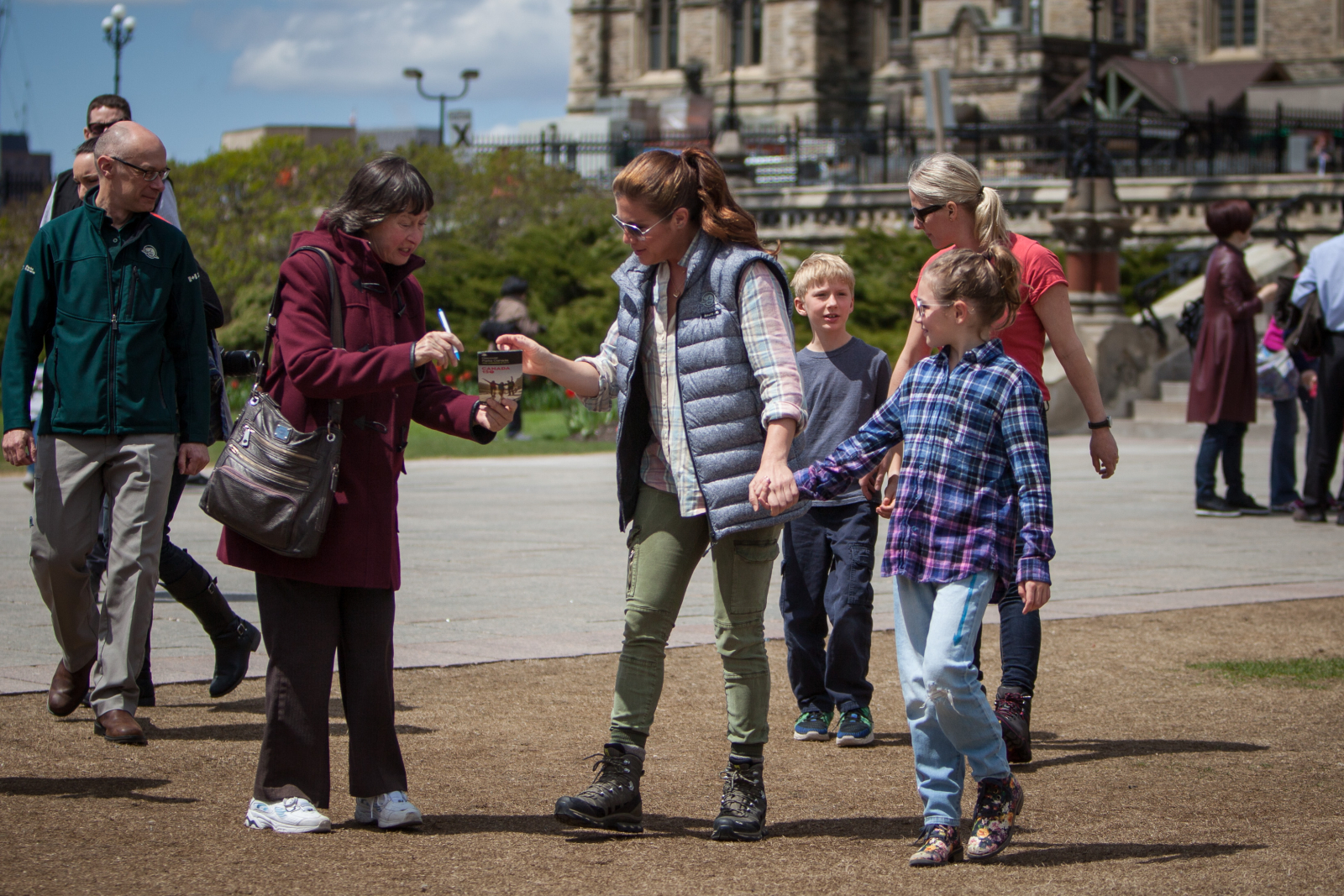 Grégoire Trudeau and Ella-Grace give an autograph to a visitor who spotted her coming down the steps of Parliament Hill.

All photos taken by Alex Tétreault on Fri. May 12, 2017 on Parliament Hill in Ottawa during a Parks Canada Learn-to-Camp event.

Sophie Grégoire Trudeau is a well-known figure in Canada.

Even before her husband became prime minister, she was a beloved media personality, a national ambassador for Plan Canada's "Because I am a Girl" initiative, a public speaker, volunteer, and recipient of the UN Women National Committee Canada Recognition Award for her contribution to human rights.

And as her fame in Canada grows, her family too, is inevitably thrust into the media spotlight. Enter Ella-Grace, her eight-year-old daughter, who took part in a Learn-to-Camp program on Parliament Hill last month, hand-in-hand with Grégoire Trudeau. 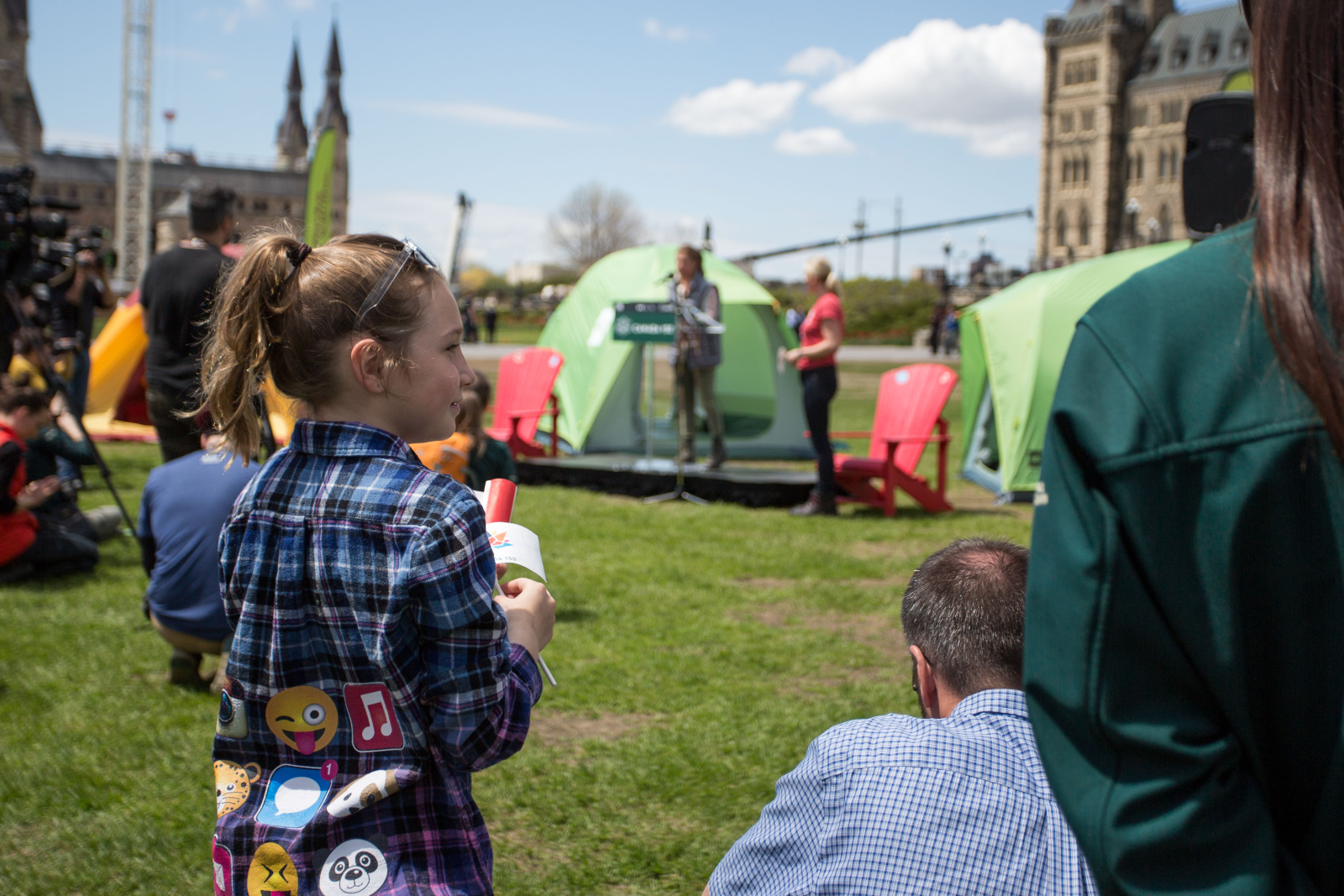 Ella-Grace Trudeau is becoming more accustomed to life in front of the camera. She's seen here listening to her mother speaking at a Parks Canada event last month.

Scripted or genuine? It's always tough to tell in politics, but in this case, I believe the moments were real.

It's perfectly reasonable to assume that eight-year-old Ella-Grace might not share her parents' comfort in front of the camera. As a father myself, I know that kids are often shy in front of strangers.

Give those strangers flashing cameras, and you've got a glimpse into the life of the children of politicians, actors, and other high-profile figures.

But Ella-Grace handled the pressure with poise and maturity — in fact, she seemed to be having a great time building tents on the hill with her mother. And in the midst of clicking shutters and flash fire, they even seemed to enjoy a genuine mother-daughter moment.

It was a warm, welcome moment of unrehearsed family bonding. 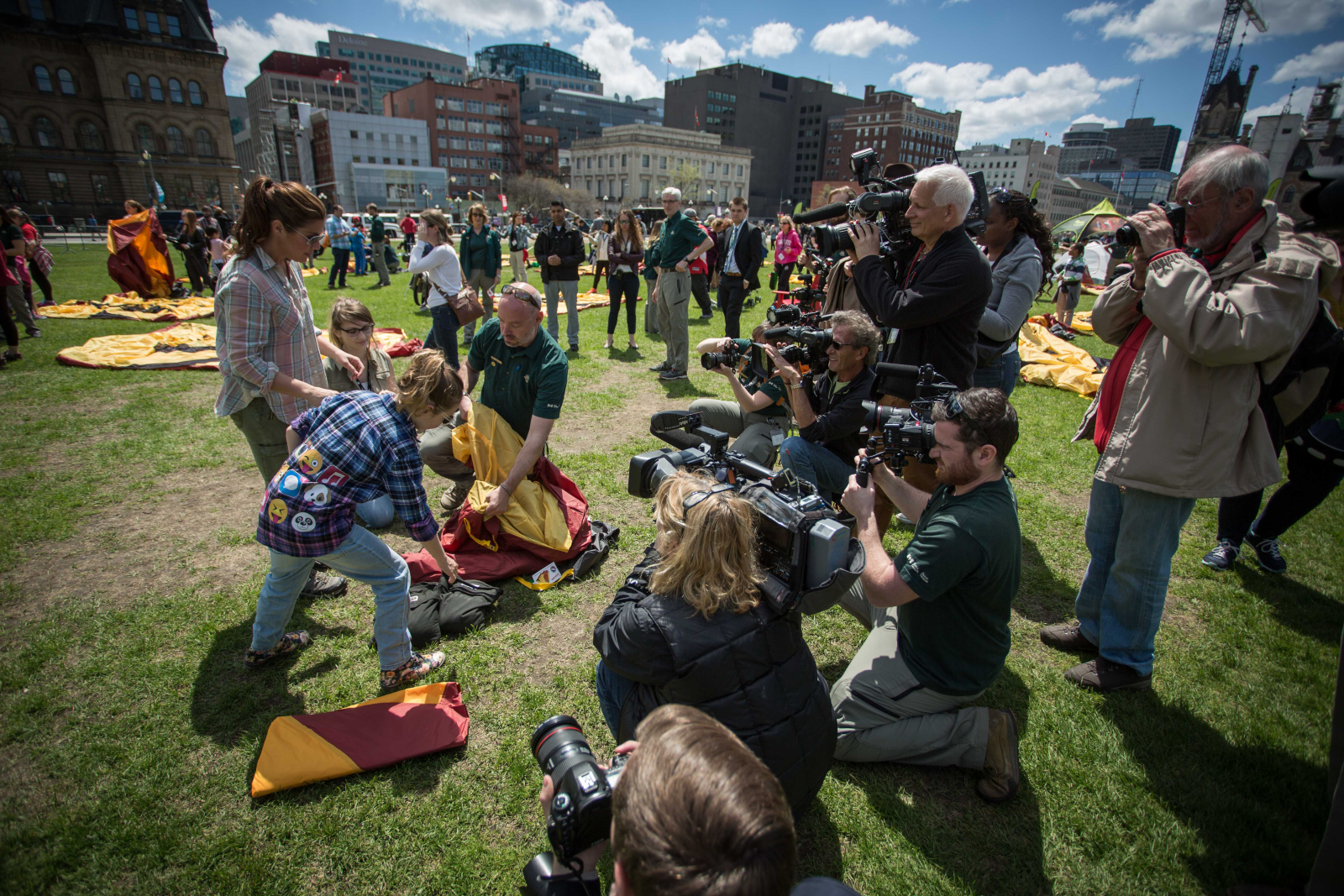 A horde of accredited photographers crowds around Grégoire Trudeau and Ella-Grace to get a shot of the fearless duo setting up their tent.

Kids and politics don't always mix, but in this case the photo opportunity worked out well.

Grégoire-Trudeau and Ella-Grace share a close relationship and aren't afraid to show it even under the public eye. In a time where every political public display is calculated and scripted, it was heart-warming to observe.

But that model isn't for everyone. Nearby, Environment Minister Catherine McKenna enjoyed the afternoon outdoors with her son. And while photos of him were allowed at the tent-building event, McKenna's staff asked media not to publish photos of him at a speaking event earlier that day.

It's a different approach to blending politics and personal life, but one that as a father and photographer, I respect. 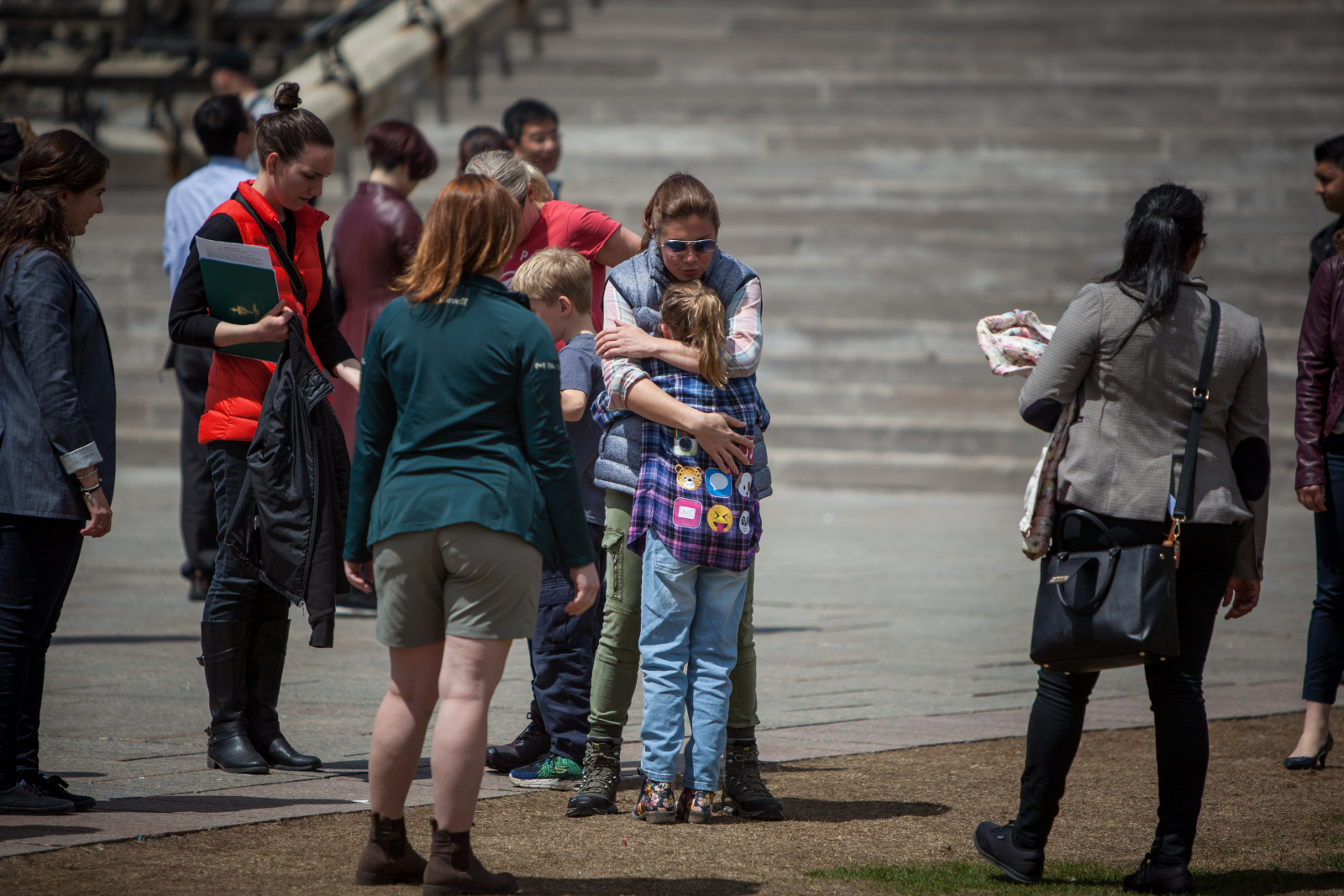 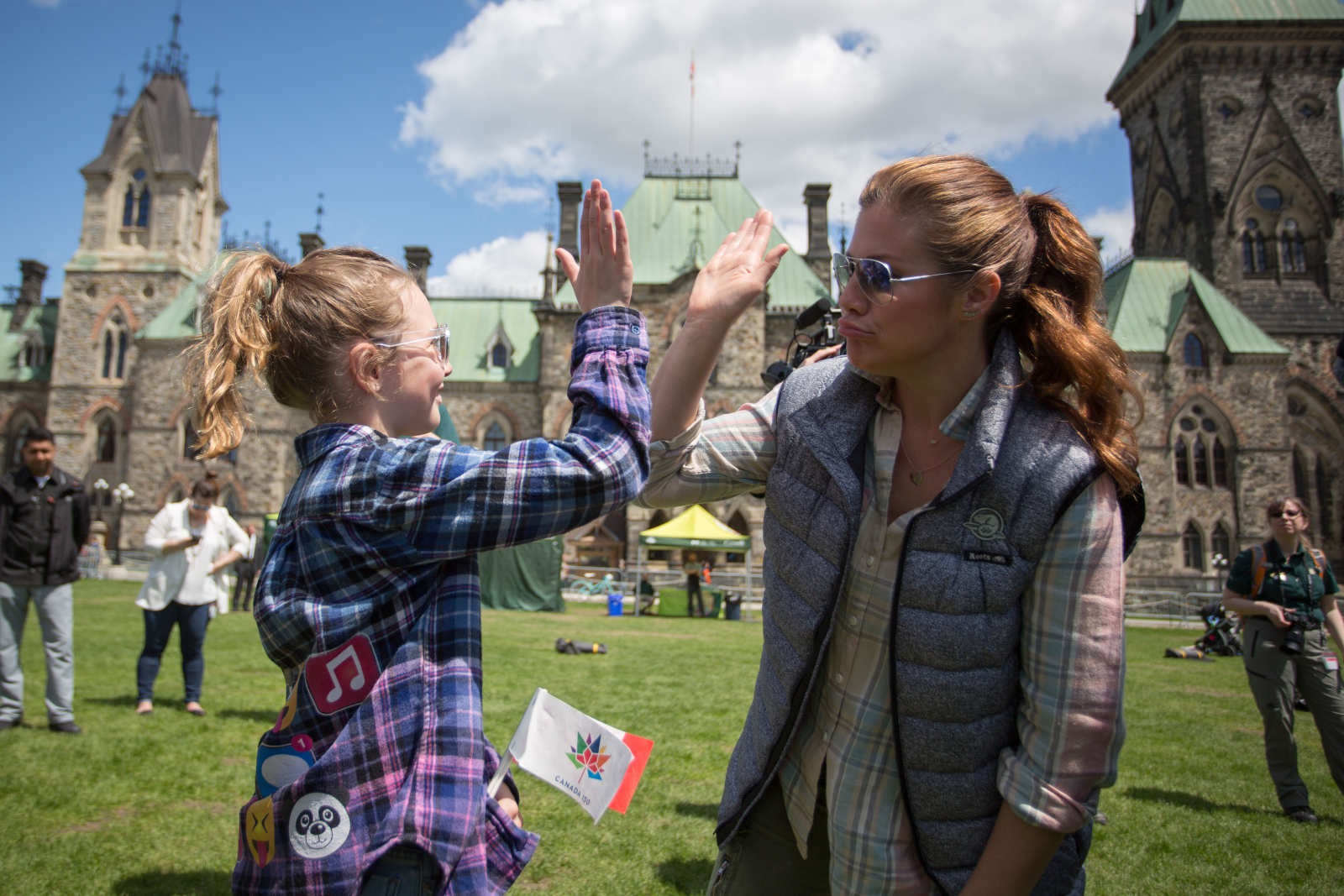 Sophie and Ella-Grace go for a high five after setting up a tent together. Success!

All in all, a great success!

At the end of the day, Grégoire Trudeau, Ella-Grace, McKenna and her son had a wonderful afternoon outdoors, building tents with members of the public. Their interactions felt genuine, not scripted, even if it was a carefully-selected photo opp.

It's good every now and then to be reminded that there are real humans behind politics, and families who support them each and every day.