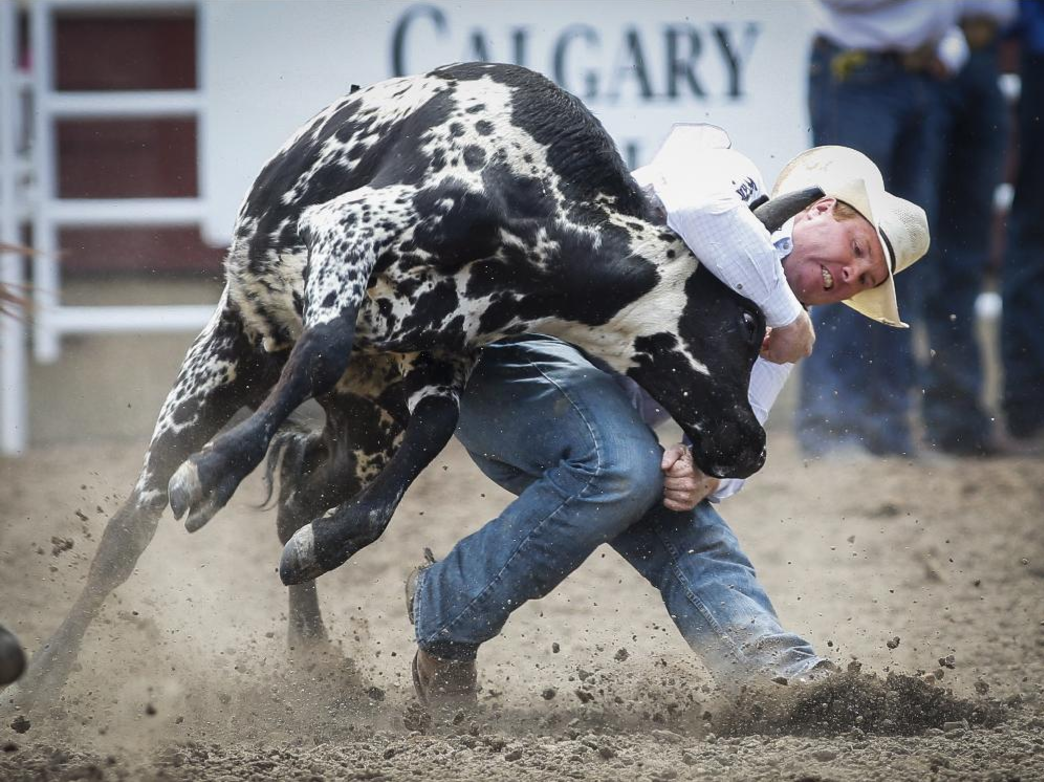 Tanner Milan, a steer wrestler from Cochrane, Alta. competes at the Calgary Stampede in July 2015. File photo by The Canadian Press
Previous story
Next story

Earlier this year, a tiny community newspaper in Iowa won a Pulitzer Prize for taking on big agriculture companies over factory farm pollution.

The Storm Lake Times, which investigated the effects of nitrogen from farm drainage on drinking water in the state, was praised for its “editorials fuelled by tenacious reporting, impressive expertise and engaging writing that successfully challenged powerful corporate agricultural interests in Iowa.”

The family that owns the newspaper reportedly lost a few friends and a few advertisers, but never doubted they were doing the right thing.

“We’re here to challenge people’s assumptions and I think that’s what every good newspaper should do,” said one family member at the time.

It’s a great example of a community newspaper showing courage and tenacity in seeking the truth. Some newspapers still uphold the highest standards and values of a free press.

Then there’s the Williams Lake Tribune. In May, I tried to book a full-page ad in the Tribune on behalf of the Vancouver Humane Society (VHS), where I work as the communication director.

The ad, as I informed the Tribune’s publisher via email, would express VHS’s opposition to the Williams Lake Stampede rodeo, which took place between June 29 and July 2. The event may be lesser-known than the famous Calgary Stampede kicking off this weekend, but from the perspective of the VHS, it's every bit as cruel.

Rejected by the corporate owner

After a couple of days of silence from the publisher, I emailed again and received this reply from an executive at Black Press, the Tribune’s corporate owner:

“In consultation with our lawyer we have determined that we are entitled to decline advertising in the circumstances. The Williams Lake Tribune is a sponsor of the Stampede because it is a significant community event that the paper supports. We appreciate that your society opposes the event and we respect your right to that opinion. You were wise to check with us before commissioning artwork and design.

“While we cannot say definitively that we will decline all possible advertising, we can say, from experience, that anti-Stampede type display advertising that suggests or argues gratuitous cruelty to animals by image or text is unlikely to be accepted by the Williams Lake Tribune at this time.”

Since the words “unlikely to be accepted” seemed to leave the door slightly open, I sent the executive the planned content of the ad to see if it would be acceptable. This included a photograph of the steer-wrestling event taken at last year’s Williams Lake Stampede, accompanied by text stating: “You know in your heart this is not right. Stop cruel rodeo events at the Williams Lake Stampede.”

The executive replied that this would not be accepted.

A matter of public interest

This is not the first time a Black Press newspaper has refused one of VHS’s anti-rodeo ads. In 2015, Abbotsford News rejected a full-page ad opposing the Abbotsford Rodeo (which was ultimately cancelled in 2016). No reason was given for the rejection.

It’s perfectly legal for a newspaper to refuse an ad for any number of reasons. The ad might be libelous or gratuitously offensive or misleading to readers. VHS’s ad did contain a graphic image of a steer being wrestled to ground, but it only showed what a rodeo-goer would typically see at the stampede — the very activity that the Williams Lake Tribune says it promotes and supports.

If the Tribune finds a photo of steer-wrestling offensive and unacceptable, how can it support the event?

It’s also perfectly normal for a newspaper not to agree with an ad it might carry. The Tribune could have made this clear with a disclaimer on the VHS ad or it could have run an editorial explaining its contrary position on rodeo.

But the Tribune chose instead to suppress a legitimate point of view on a matter of public interest. It didn’t trust its readers to make up their own minds about rodeo. Unlike The Storm Lake Times, it didn’t challenge assumptions, “like every good newspaper should do.”

The B.C. and Yukon Community Newspaper Association, of which the Williams Lake Tribune is a member, says part of its mission is to: “Improve standards in the practice of the profession of journalism, and to promote a high standard of conduct and professional ethics in the business of newspaper publishing.”

The Canadian Association of Journalists’ ethics guidelines state that, “Defending the public’s interest includes promoting the free flow of information, exposing crime or wrongdoing, protecting public health and safety, and preventing the public from being misled.” (Italics added).

Clearly, ethics matter to journalists and to the public they serve. People still believe that a free press is vital to democracy, that diversity of opinion matters, that newspapers should be courageous defenders of free speech.

What isn’t clear is whether those things matter to the Williams Lake Tribune, which, to my knowledge, has not been nominated for a Pulitzer Prize.

Editor's Note: A version of this op-ed was originally published on the Vancouver Humane Society's blog.

"... The Williams Lake Tribune is a sponsor of the Stampede because it is a significant community event that the paper supports."

Is the stampede significant enough to sponsor because of the advertising revenue received from the stampede?

"... we can say, from experience, that anti-Stampede type display advertising that suggests or argues gratuitous cruelty to animals by image or text is unlikely to be accepted by the Williams Lake Tribune at this time."

Would the publication accept advertising that suggests or argues NON-gratuitous cruelty to animals by image or text?

It's time to accept that the likes of circuses, rodeos, stampedes, marine animal acts, and all animals held in captivity merely to "entertain", are illegitimate and archaic, and must be discontinued.

We all share the worldwide responsibility to ensure animal welfare, acting and speaking, "for those who cannot speak for themselves", not the milque toast stance this publication has taken. "Balanced" journalism?

Wonder how many horses will

Wonder how many horses will be killed in the Calgary Stampede this year. Another question would also be how many are injured during the (in)human games. Very sad that this is still such a big part of so called civilized culture. Gandhi said that you can tell how civilized a society is by the way they treat their animals.