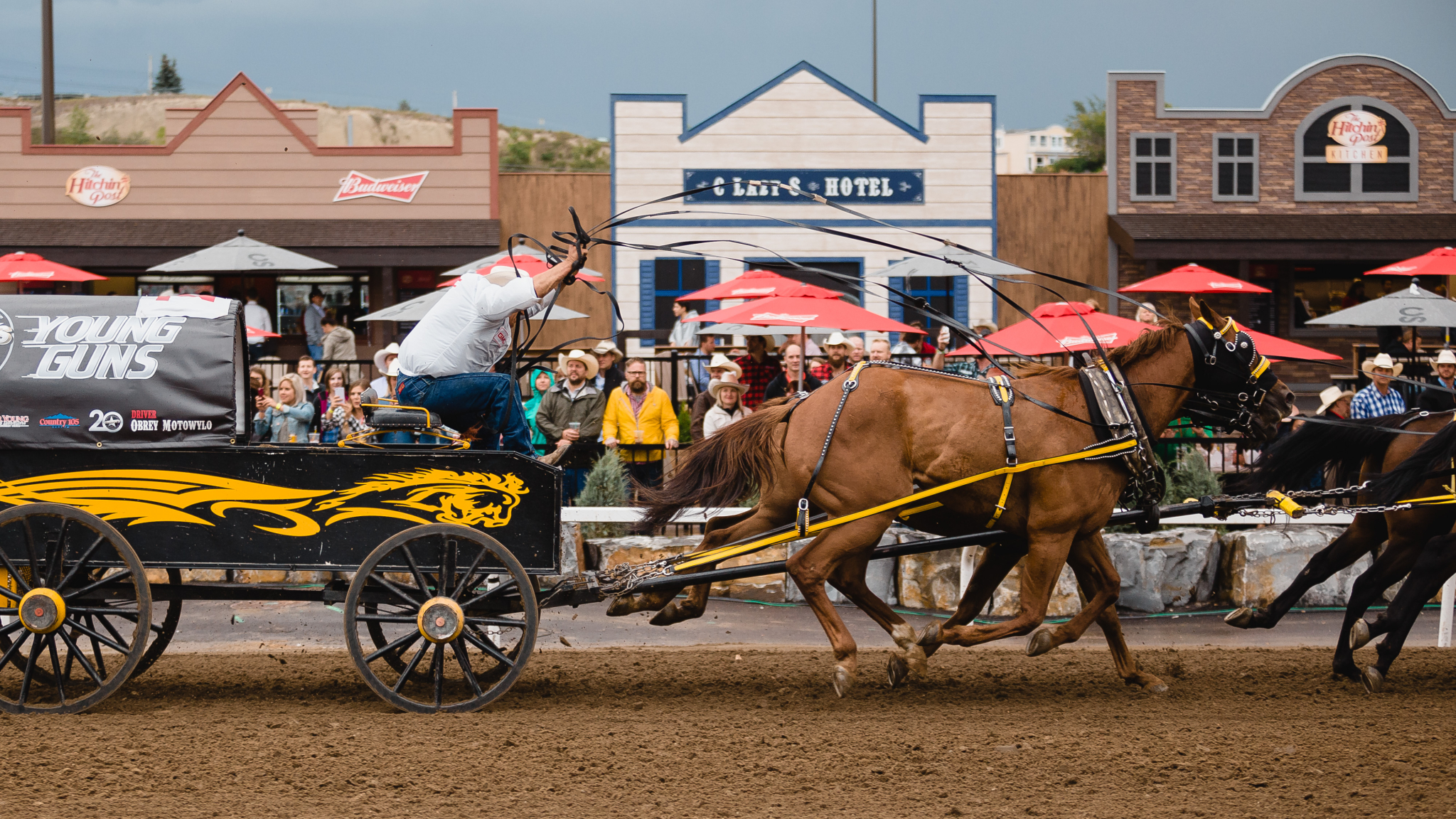 A chuckwagon races to the finish at the Calgary Stampede. Photo by Louie Villanueva.
Previous story
Next story

If all you could do was listen, you would assume from the collective gasp rising from the cheap seats to the luxury boxes that something tragic had happened as the wagons circled the barrels to begin a chuckwagon race at the Calgary Stampede. Four wagons drifted around marked barrels, skidding centimetres next to one another as the drivers spurred them on out of the knotted start toward the mouth of the track.

With rain turning the Calgary Stampede’s chuckwagon racetrack to muck on Wednesday evening, there were no crashes of any kind. A few wagons skirted alongside one another while one rider skidded alongside the guardrail protecting the cameramen and women from the action on the track.

But collisions are always a concern. Like Nascar or Formula One, collisions make the highlight reel more often than crash-free results. There was only one reported incident as of Thursday July 14 when a wagon rolled over on the Stampede’s third day, but no injuries to either the rider or horses were reported.

That’s rare for an event that animal rights activists foresee going the way of Orca shows at SeaWorld.

Four horses died in a chuckwagon race last year, prompting Stampede officials to institute new safety regulations in 2016. According to the Vancouver Humane Society, 64 chuckwagon horses — including outrider horses — have died at the Stampede since 1986. Some are euthanized after breaking legs, while some die from ligament injuries or pulmonary aneurysms.

Others have heart attacks on the track.

But the Stampede says It's not true to say that the animals are being abused.

The Calgary Stampede - known as the "Greatest Outdoor Show on Earth" - promotes itself as a heritage event where people from all over the world can experience a taste of the West. The “animal care” page on their website says that, since the Stampede is grounded in over a century of agricultural tradition, they are “passionate and vigilant about animal care.”

Stampede organizers also say that they hold themselves to three standards of animal care. They aim to meet regulations set out in Alberta’s Animal Protection Act, as monitored by the Calgary Humane Society; ensure “codes of best practices” are met for each individual animal according to recommendations from industry experts; and adhering to their own animal care code by keeping veterinarians on-site at all times.

Over 7,500 animals “take part” in events from calf-roping and chuckwagon racing to educational programs and dog shows every year. The Stampede says it looks to the latest scientific developments “to better understand animal behaviour, response and performance related to western events.”

Western Heritage is the brand, and the rodeo is a big part of it.

She said Chuckwagon races were only introduced by the Stampede in 1923 as a form of entertainment. There was no history of chuckwagon racing prior to their introduction to the annual summer festival which attracts over a million guests from around the world every year and generate millions for the local economy — nearly a quarter of the way through the twentieth century.

“Simply because we once used horses to get around, doesn’t mean we should engage in an annual spectacle of abuse to showcase that,” Labchuk said.

Labchuk said these events are held for amusement, not because they have “any legitimate basis in heritage.”

Even if they do, she said that doesn’t mean we should continue to support them.

“We are not tied to performing abusive behaviours we may have performed in the past just to celebrate what we once did. Roman gladiator rings are closed. We don’t do bullfights in Canada. There are many ways we used to abuse both humans and animals that we’ve realized now are wrong,” Labchuk said.

There were few lead changes in the final stretches of each race, but that didn’t stop the riders from aggressively snapping the reins, urging the horses to go “down to the wire at a high rate of equine acceleration,” as one announcer colourfully put it.

According to the Stampede’s official website, while the chuckwagon races look chaotic, they are a “precisely choreographed team effort.” The thoroughbred horses “at the centre of the excitement” are “poised to explode into the action at the sound of the horn.”

The Stampede also says it has stringent rules and takes every precaution to prevent incidents.

Rodeo events like chuckwagon racing are already banned in places like Vancouver and the United Kingdom where animal rights activists successfully encouraged legislators to criminalize the practice.

But Stampede officials note that other domestic animal competitions take place across Canada, including equine, bovine and canine events, and "frankly around the world, wherever there's ranching, there's rodeo."

"And there are also rodeos and rodeo events across Canada from PEI to BC," said Stampede spokesman Kurt Kadatz. "The Calgary Stampede is where country meets the city. Our events showcase horses, cattle and other livestock as working animals and competing athletes. Animals are at the heart of the Stampede and experiences at Stampede Park play a critical role in helping urban residents appreciate the unique nature of working animals, and better understand the interaction between people and livestock."

On Wednesday, video tributes occupy the crowd as Haliburton-sponsored tractors ready the track for the next set of heats. One reminds the audience that the horses are “treated like pets. They’re treated like family members.”

From the birds-eye-view in the nosebleeds to the infield where you can see the strain in the horses eyes and hear the crack of the reins on their hides, it's hard not to imagine the race ending tragically every time the wagons round the barrels.

Labchuk said these animals aren’t pets, they’re used for entertainment. She said horses that don’t make the cut to take part in Stampede events are sent to slaughterhouses, and other animals that sustain injury are often put-down with no attempt at rehabilitation.

She thinks there’s a fundamental problem when living beings incapable of consenting to the race they’re taking part in are in the most danger, under high levels of stress and torment.

“You can’t claim to treat an animal like a family member because nobody would terrify their family member, lasso them around the neck and throw him or her to the ground simply to entertain another person. Those claims ring really false,” Labchuk said.

The Calgary Humane Society (CHS) — a law-enforcement body with the license to press charges against practitioners of animal cruelty — claims to “fundamentally oppose high risk rodeo events like chuckwagon racing, calf-roping and steer wrestling.” Historically, they say, they result in the largest number of injuries and deaths.

But CHS chooses not to press charges against the Calgary Stampede. They say that other organizations can try to change the Stampede through protest or advocacy. But they believe the best way to protect the interests of animals is to work with organizations like the Stampede.

To do that, they say they respond to public complaints where “reasonable and probable grounds of an Animal Protection Act offence exist,” and have their peace officers monitor the Stampede grounds to ensure no violations occur.

“As the agency responsible for enforcing provincial and federal animal protection acts within the City of Calgary, Calgary Humane Society’s primary role at the Calgary Stampede is enforcement of this legislation,” McIntosh said in an email statement.

CHS says they have “planted seeds of awareness and an understanding of animal welfare in hopes of a Stampede that is as fun and safe for animas as it is for people” through “open dialogue” with the Calgary Stampede Board.

But Labchuk, an animal rights lawyer, said the events are arguably illegal under Alberta law which states that you can not “unreasonably cause distress to an animal.”

According to Animal Behaviourist Temple Grandin, the animals used in rodeo events are “prey” animals. That means they’re much more fear-prone than other animals because the only way they can survive in the wild is to remain on high alert, able to run away at any time.

For prey animals, fear is worse than pain. And fear is the primary motivator for why horses run in chuckwagon races. The horses are equipped with a "flank strap" on their hindquarters, which is tightened to encourage them to move.

Labchuk said events like chuckwagon racing and calf-roping cause unnecessary suffering and that the CHS should bring the Stampede to court.

“It’s very surprising to me to see a law enforcement agency, instead of going out and laying charges, posting a policy statement on their website informing the public that they ‘oppose’ these events. These events are arguably illegal. What the Calgary Humane Society needs to do is go out there, lay charges, bring them to a court, and let a judge decide if these acts pass legal muster,” Labchuk said.

The Calgary Stampede did institute new safety measure for chuckwagon horses in 2016 following last year’s fatalities. Wagons are now subject to inspections that test the strength of their welds, adjustments to the guardrails to protect them from erosion, and tweaks to the barrel placement to discourage collisions.

But Labchuk said that regardless of the safety measures put in place by Stampede organizers, “the fact of the matter is that these animals are being abused and terrified simply so we can get some cheap thrills out of watching them.”

The Stampede rejected her argument.

"We certainly respect people’s right to viewpoints that oppose participation of animals in food production, for clothing and fiber, in competition or as working animals, but it’s irresponsible, unfounded and untrue for someone to say: 'the fact of the matter is that these animals are being abused and terrified,'" said Kadatz, the Stampede spokesman. "In fact the Stampede has opened our facilities to scientists doing research on animal behavior and welfare. Data and science are important in determining facts."

He also noted that Dr. Temple Grandin and other animal welfare experts at the University of Calgary had recently authored a study that found the animals were not scared.

Labchuk said the Stampede is trying to make people feel better about watching the events without addressing the underlying problems that make them so harmful to the animals involved.

“You can’t change the rules to the extent that the animals will never not experience terror. They don’t perform in these events because they want to, the perform because they’re scared,” Labchuk said. “No matter what the Stampede says about new safety measure it puts in place, the fundamental fact that we’re using unwilling animals who just want to be left alone is never going to change.”

Like other events that use animals for entertainment under questionably inhumane conditions, she doesn’t think their removal from the Stampede is too far off.

Labchuk said the Stampede can stand on its own as an interesting event without the rodeo.

“This is the way history is going. The Stampede, at this point, has a choice. It can wait until the consumers or the courts come in and legislate limits or bans on rodeo activities, or it can do the right thing now and be on the right side of history.”