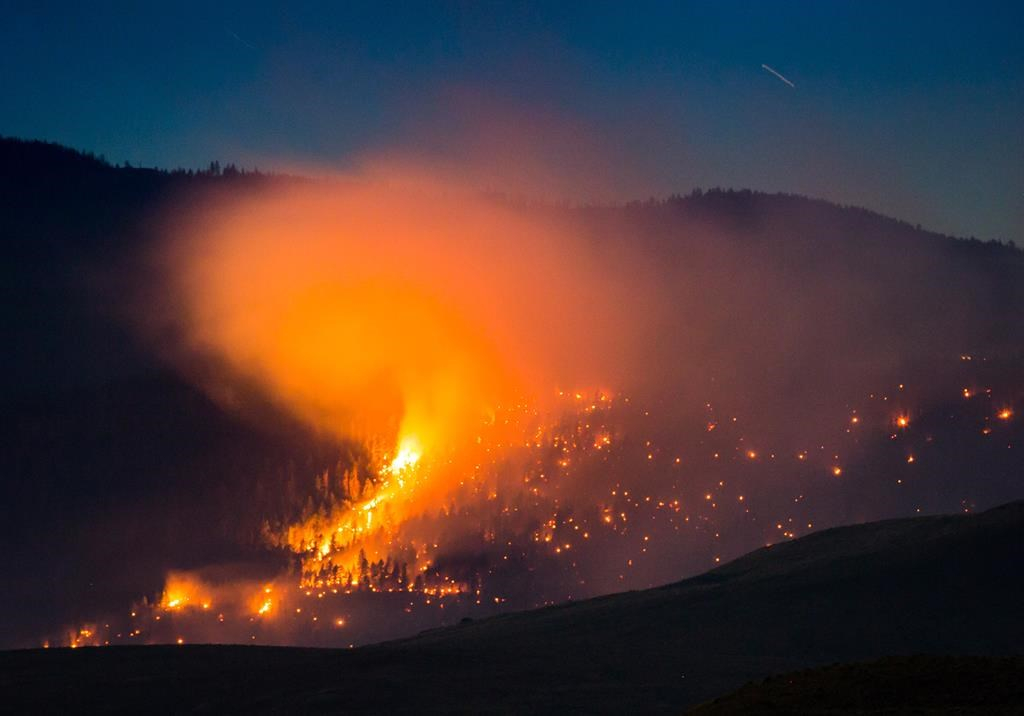 A wildfire burns on a mountain near Ashcroft, B.C., late on Friday, July 7, 2017. Photo by The Canadian Press/Darryl Dyck
Previous story
Next story

Fire crews worked to save buildings and protect transportation routes Saturday after thousands of people were chased from their homes by wildfires that raged out of control across British Columbia's central Interior.

More than 180 fires were burning, many considered out of control, as the B.C. government declared a provincewide state of emergency to co-ordinate the crisis response. Officials said buildings have been destroyed, but they did not release numbers.

The BC Wildfire Service says over 173 fires were reported on Friday alone as lightning storms rolled over several parts of B.C.

Kevin Skrepnek, chief information officer for the service, said it was "an extraordinary day in terms of fire activity across the province."

"We're focusing now on public safety, keeping these fires away from communities, protecting transportation routes, things like that," he said in an interview on Saturday.

John Rustad, minister of forests, lands and natural resource operations, said the province has been in contact with the federal government "in case there's a situation where we believe we need to bring in additional resources, whether that's through the military or other purposes."

He said Ottawa is ready to provide whatever help is needed.

All of the province's resources have been applied to the fires and they are making every effort to save lives, homes and infrastructure, Rustad said.

On Saturday, 1,000 firefighters were battling the wildfires with an additional 600 people backing them up. Another 200 contractors were helping.

"But that number is about to grow, likely dramatically in the next few days," said Rustad. "We've deployed all of the staff that we have available."

He said 260 more firefighters were coming from other parts of Canada.

Eight of the fires were threatening homes or other structures, said Rustad

John Ranta, mayor of Cache Creek and head of the Thompson-Nicola Regional District, said Friday that a fire burning between Ashcroft and Cache Creek destroyed dozens of buildings, including at least five houses, 30 trailer park homes and two hangars at a regional airport.

On Saturday, Ranta said no further structures were lost overnight.

"Things are looking at lot better here now," he said.

In Kamloops, a smoky haze covered the city, making it difficult to see the hills on either side of the Thompson River Valley. The area smelled of burning wood.

Gordon Davis, manager of the emergency centre at McArthur Sports Centre in Kamloops, said more than 500 people had registered as of Friday.

"A lot of them watched their homes burn down," he said.

"A lot of them don't know if their homes are still there. That not knowing is stressful."

Some people who weren't ordered to leave their homes were ready just in case.

Gwen Dachsel waited in her home in Williams Lake on Saturday morning with the doors and windows shut, her car loaded with two bags of personal belongings.

Dachsel, 72, said the roads leading out of her community have been closed in almost every direction and the fear of not knowing what to do is almost as frightening as the fires.

"If we had to really leave town, I don't know which way we would go," she said in a phone interview. "If I saw a flame, then I would (feel trapped). Then, I would panic."

Dachsel, who has asthma, said her eyes stung and her breathing was heavy from smoke outside while she tried to water her plants. Her family photographs have been stored away in a fireproof safe, which Dachsel hopes will protect them if the house she has lived in for more than four decades goes up in flames.

"It would be quite a traumatic experience, and for my daughters too," Dachsel said. "It's life that matters, so hopefully they can control these fires and things will be OK."

Mike Flannigan, the Director of Western Partnership for Wildland Fire Science, said the thunderstorms sweeping through the area brought little rain and set off fires with lightning strikes.

The thunderstorms also create a lot of wind, which fans the flames, he said.

"So this creates strong, shifting winds, which can be very dangerous for people and firefighters," he said.

"You really have to be on guard if there's thunderstorms around, if you're trying to do fire management."

Several highways have been closed because of fires, including in several spots along Highway 1 between Ashcroft and Cache Creek, south of Quesnel and through Savona.

Theo Faber, a 39-year-old truck driver from Abbotsford was on his way to get some lumber north of Cache Creek on Friday when he found himself stuck in heavy smoke and fire.

"My safest option was to keep going slowly," he said. "Fortunately, everyone was moving through. The smoke was very thick. I could barely see through it. There was fire in the ditches on both sides of my vehicle."

Faber said he would have "perished" if he had reached the highway 15 minutes later than he did.

"The people already evacuated or facing evacuation, as well as our frontline firefighters and first responders, need to know everyone in the province is behind them," he said in a statement.

Yesterday evening (Sunday) my daughter, who lives on the Hart highway a few klicks north of Prince George, texted me photos of the sunset through the smoky haze. If it weren't such a tragic situation, the photos would be absolutely stunning!

'No time to get scared:' Evacuees recount watching homes burn in B.C. wildfires