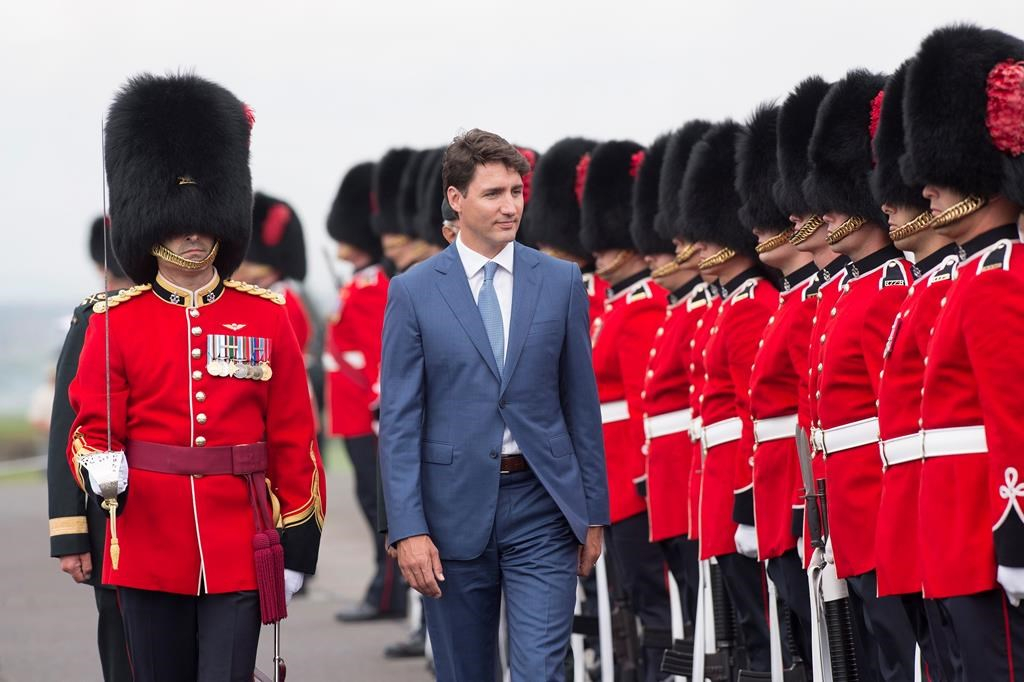 Prime Minister Justin Trudeau inspects the honour guard during a visit at the Citadelle on Wednesday, July 19, 2017 in Quebec City. Photo by The Canadian Press/Jacques Boissinot
Previous story
Next story

Prime Minister Justin Trudeau says he's willing to fill opposition parties in on Canada's strategy as it heads into trilateral negotiations next month with the U.S. and Mexico on a new North American Free Trade Agreement.

Trudeau made the promise Wednesday as the U.S. announced that the first round of NAFTA negotiations will take place Aug. 16-20 in Washington, D.C.

At a news conference in Quebec City, Trudeau stressed the importance of presenting a non-partisan "united front to defend Canadian interests" in the crucial negotiations.

"And that's why we are more than happy to sit down with opposition parties and discuss the approach we're going to take on negotiating, renegotiating NAFTA in the best interests of all Canadians."

In French, Trudeau added that he'll be very happy to have ministers sit down with representatives of other parties "so they know very well what we're going to do to continue to defend Canadian interests."

"For me, it's a big issue, and we're taking it seriously. That's why I'm always open to working with all the different parties to show that we are all there to protect Canadians."

On Monday, the U.S. disclosed its negotiating objectives, as is required under American law. There is no equivalent requirement in Canada and the Trudeau government has, until now, refused to go into much detail about its approach, maintaining that it's not helpful to negotiate in public.

Conservative and New Democrat MPs joined forces Tuesday in a bid to pressure the government to end the secrecy surrounding the talks.

Among other things on the U.S. wish list revealed Monday, the Trump administration wants better access for U.S. agricultural exports, freer trade in telecommunications and online purchases and elimination of the dispute resolution mechanism.

In reacting to the U.S. list, the Trudeau government has given some hints about how it will approach the talks.

For instance, Trudeau insisted Tuesday that he won't agree to dismantle Canada's system of supply management for dairy and poultry products, which has been targeted by U.S. President Donald Trump in the past.

And while there could be some improvements to the dispute resolution process, Canada's ambassador to the U.S., David MacNaughton, said Tuesday it's "critical" to have some kind of external mechanism to resolve disputes embedded in the pact.

Mid-level Canadian and Mexican officials huddled Wednesday in Ottawa to discuss the looming NAFTA talks. But government officials played down suggestions of a co-ordinated Canada-Mexico negotiating strategy, saying the meeting was a "get-to-know-you" session focused primarily on logistics.

"We are keen to work with both our NAFTA partners to deepen our economic relationship," said Adam Austen, spokesman for Freeland. "Canadian trade officials regularly and frequently engage with their counterparts from Mexico and the U.S."

'This will not be a short negotiation': U.S. releases list of demands for NAFTA