Is big oil committing fraud to stay in business? 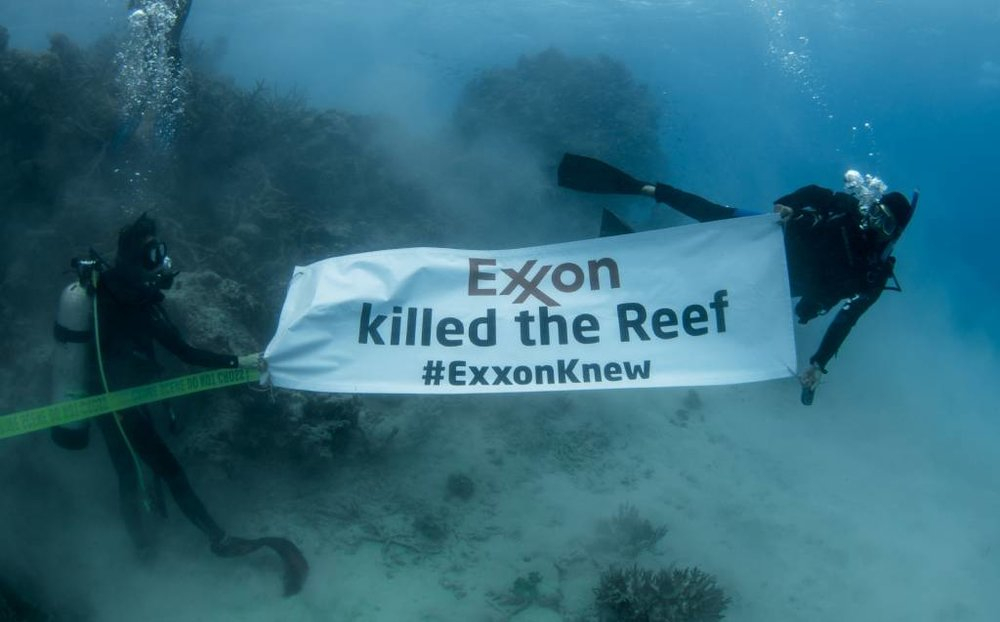 An image of the Great Barrier Reef from the #Exxonknew meme, part of 350.org's "Exxon Killed the Reef" campaign to raise awareness about the effect of climate change on corals. Image courtesy of 350.org
Previous story
Next story

Canada’s oilsands have been sucked into the bitter legal fight around Exxon and climate change.

These types of investigations are few and far between in today's media landscape, but you know you can count on National Observer to deliver on them when you subscribe.

Carl's report revealed that American authorities suspect Exxon is misleading its investors by purposely minimizing the risk of climate change action on its profits.

It’s all part of the ever-growing #Exxonknew controversy. Just like the battle against big tobacco, American state attorneys general have been tangling with Exxon demanding to know when the oil giant realized the truth about climate change and why the company financed efforts to obscure public understanding of the science.

Bill McKibben describes it as “the most consequential lie in human history”.

“They kept that lie going past the point where we can protect the poles, prevent the acidification of the oceans, or slow sea level rise enough to save the most vulnerable regions and cultures. Businesses misbehave all the time, but … no corporation has ever done anything this big and this bad.”

Exxon denies it did anything wrong and calls the investigation a “political witch hunt.”

Remind you of anyone else bigly in the news lately?

The company didn't respond to questions from National Observer reporter Carl Meyer who asked the company and its Canadian subsidiary, Imperial Oil, about the situation last week.

New York’s attorney general alleges that Exxon’s Canadian arm — Imperial Oil — was “false and misleading” by keeping two sets of books. One set designed to placate investors worried about the implications of climate policy, and a different set that Imperial actually used for its operations.

Exxon's lead lawyer, Theodore V. Wells Jr., wants the AG to close the investigation, arguing that there is no evidence to pursue the probe.

Eric Schneiderman, the New York AG, has gotten a court order to get testimony from Jason Iwanika, an Imperial Oil employee who pushed back against his bosses’ bookkeeping practices in the Alberta oilsands.

Around the world, lawyers are riffing off the fight against tobacco companies and launching lawsuits against big oil or against governments for failing to protect citizens from fossil fuel impacts.

And in one of the most interesting cases — the so-called ‘kids vs climate change’ case — a trial date has been set for February 2018 in Oregon when 21 youth will go at the U.S. federal government for failing to uphold the doctrine of “public trust.”

Legal cases around climate pollution have already been successful in several countries including the Netherlands, South Africa and Pakistan.

Mark Carney, Canada’s former central bank chief and now the top banker in the U.K., has been warning industry that: “claims … have the potential to hit carbon extractors and emitters — and, if they have liability coverage, their insurers — the hardest.”

Exxon and Imperial are both ducking questions about the court order for Jason Iwanika to testify. So far, neither company will answer questions. Canadian Justice Minister Jody Wilson-Raybould replied through her office but only to say that they won’t comment on an active court case.

Do you see any other media outlets who are actively chasing after this story in Canada like National Observer's Carl Meyer?

Who is asking the tough questions and holding the powerful to account?

Carl is going to keep chasing this story, because he knows that you want answers. Carl knows that you need National Observer to continue the hunt for the truth.

This is why journalism matters

Investigative journalism is so critical in a situation like this. Exxon/Imperial can stonewall daily news reporters until the news cycle moves on. Big oil can pay armies of lawyers to bury the courts in paper, motions and appeals.

Powerful oil companies need to be held to account in public. And thanks to readers like you who subscribe to National Observer, our investigative team can keep digging for days, months and even years.

On your behalf, we’ll keep talking to whistleblowers and sifting through access-to-information results. National Observer will get the story and get it to you. That is our mission.