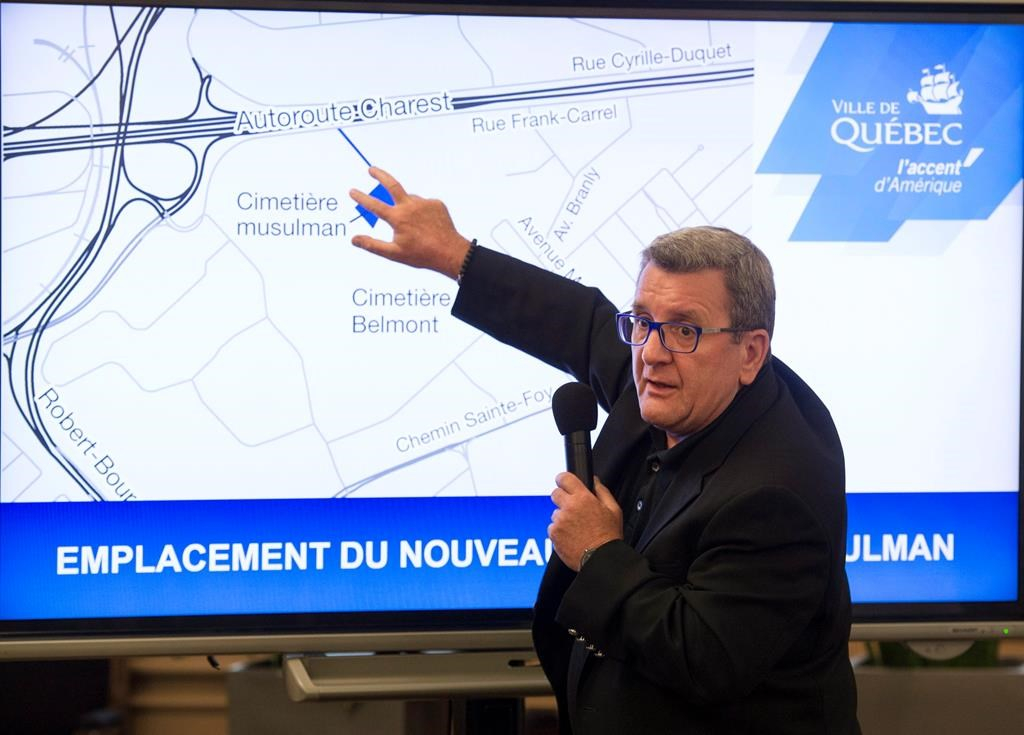 Quebec City mayor Regis Labeaume points at a map as he announces the establishment of a Muslim cemetery, in Quebec City on Friday, August 4, 2017. Photo by The Canadian Press/Jacques Boissinot
Previous story
Next story

Muslims in Quebec City are going to have their own cemetery after all.

The cemetery will be located on a parcel of land of about 6,000 square metres the city is selling for about $270,000 plus taxes, Mayor Regis Labeaume and members of the Muslim community said at a news conference Friday.

It is expected to be ready this fall.

The news came just three weeks after a proposal aimed at setting up a Muslim cemetery in a town southwest of Quebec City was defeated in a referendum by a 19-16 margin.

Quebec City's Muslims have been looking for a cemetery for two decades, but made a renewed push after they completed the payment for the city's main mosque in 2011.

It was there last January that a gunman shot dead six men in the main prayer hall and injured 19 others. The bodies were sent overseas and to Montreal for burial.

The mosque's Mohamed Labidi praised Labeaume for keeping his promise to forge ahead with plans for the cemetery.

"It's a great day," Labidi said. "It is a historic day for Quebec City. Today, we are reaping the benefits of 20 years of hard work."

"Earlier, Mr. Labeaume was praising the land and its beauty," he said. "I told him, 'You're going to push us to die earlier because we want to take advantage of the land.' It's just to say there is joy today and we are all going to die in peace and with respect."

Benabdallah also stressed the importance of remembering those who died in the shooting in January.

"I'll finish up with a fraternal thought for our six brothers who died in the tragedy last Jan. 29," he said. "Today's announcement will put a bit of balm on this tragedy."

This is heartwarming in a

This is heartwarming in a time of abject shame at the way this community has been treated.