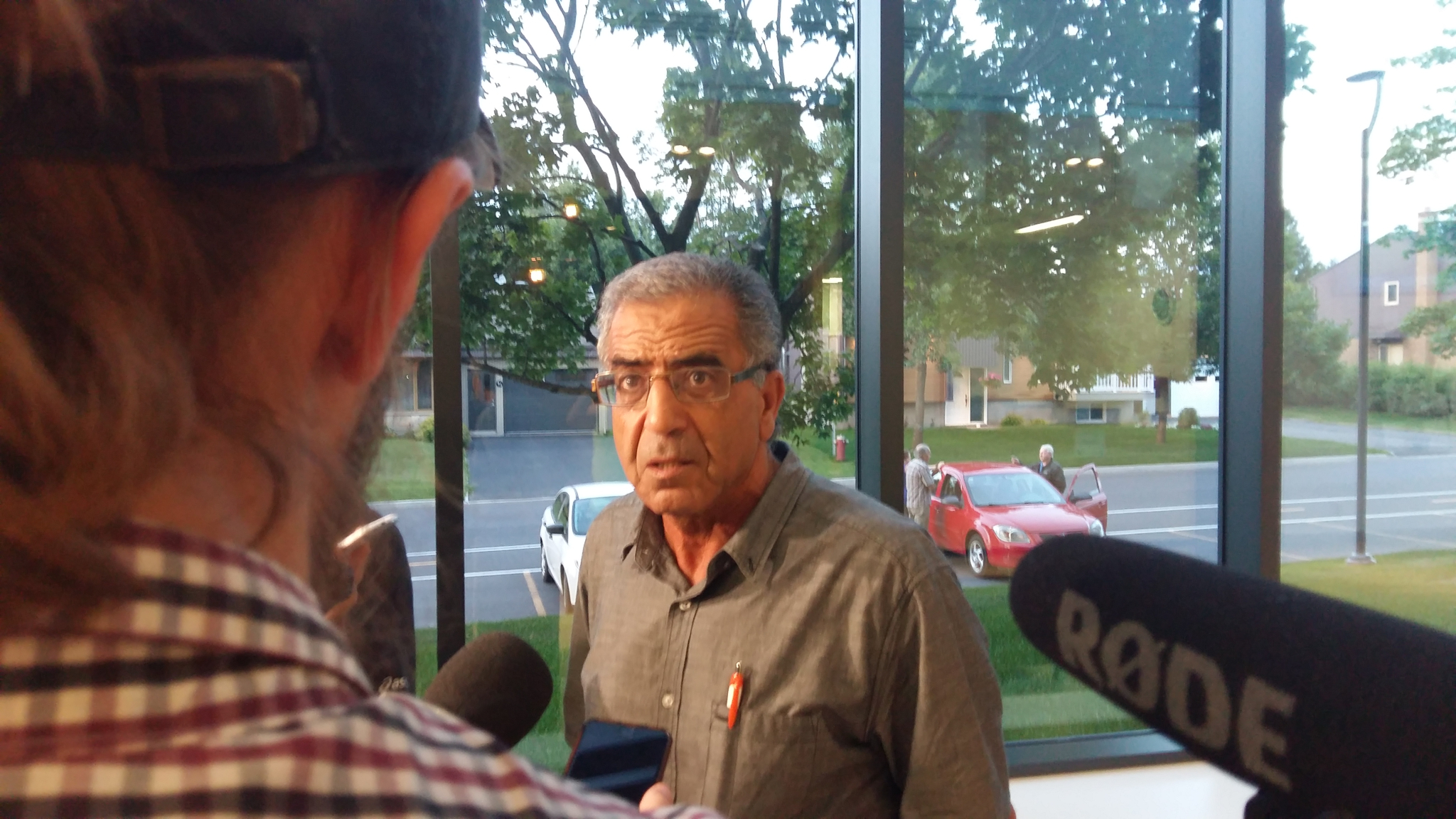 Tensions were running high in Saint-Apollinaire, Quebec, on Sunday, July 16, as local residents rejected the creation of a Muslim cemetery in a referendum. Mohamed Kesri spoke to reporters as the voting took place. Photo by Clothilde Goujard
Previous story
Next story

By the end of a tense day of drama, it took only 19 ballots to stop Muslims from getting a cemetery in one of Canada's most populous metropolitan regions.

Some blamed fear and intolerance, while others in the small Eastern Quebec town of Saint-Apollinaire were in shock. The town of about 6,000 people is about 35 kilometres southwest of Quebec City, which is the capital of Quebec and the second most populous region in the French-speaking province after Montreal.

The residents were voting whether to allow some land previously owned by a local funeral home to be converted into a cemetery for Muslims to bury their dead.

But the city only allowed a few dozen people to take part in the referendum, limiting the vote to 49 people who lived on property near the site. Only 36 turned out to vote, with 16 voting in favour, 19 voting against and one person spoiling their ballot.

The results and the entire process left the proponents scratching their heads.

“It wasn't a consultation about whether trash is being collected in the morning or at night," said Mohamed Kesri, a member of the Islamic Cultural Centre of Quebec City, moments after the votes were counted. "It was an important request. We can’t base (this decision) on a refusal by 19 people. It’s crazy, it’s unbelievable."

The rejection of a cemetery for Muslims in Saint-Apollinnaire, Quebec on July 16, 2017 left many locals stunned. Video by Clothilde Goujard

The Islamic Cultural Centre of Quebec City had been looking for a cemetery for about 10 years but the plan to create the Muslim cemetery took on special significance after a mass shooting at a mosque in Quebec City last January that left six men dead.

Canadian Prime Minister Justin Trudeau has described the shooting as a terrorist attack.

Police arrested a suspect, Alexandre Bissonnette, who now faces charges in connection with the deadly attack. Local community leaders have also urged politicians to show leadership and avoid over-the-top rhetoric and policies that they believe have triggered more hatred and intolerance. Bissonnette has described himself as a fan of U.S. President Donald Trump.

The bodies of five of the six men killed in the January shooting were flown back to their countries of origin since there was no burial ground nearby. Quebec City Mayor Régis Labeaume and other local officials vowed to fight intolerance in the wake of the shooting. They also pledged to create a new cemetery in the region for Muslims.

While local supporters of the plan were optimistic, their hopes were dashed by the voters in Saint-Apollinaire.

"It was fear and misinformation that drove this decision," said Bernard Ouellet, mayor of Saint-Apollinaire. "If it had been just a cemetery, I have the feeling there wouldn't have been a problem. It became a problem because it was a Muslim cemetery.”

Anti-Muslim sentiments have occasionally flared up in Quebec in recent years after the former Parti Québécois government proposed a "charter of values" that was criticized for singling out immigrants. But Quebec voters massively rejected this proposal in an April 2014 general election when they sent the Parti Québécois back to the opposition benches of the National Assembly. Premier Philippe Couillard's Quebec Liberals distanced themselves from the PQ plan and were elected to form a majority government in that election.

Tensions were running high in the afternoon in Saint-Apollinaire as residents turned out for the vote. Many of them declined to speak to reporters, and local officials urged National Observer and other media outlets to keep their distance from the polling station.

Marcel Landry was among those who voted in favour of the Muslim cemetery.

“I think it’s normal that there should be a (Muslim) cemetery close to their region. That’s the main reason why I voted for this but I do understand the opposition and I respect it,” he said.

His wife of 47 years, Lise Gagnon, said ahead of the voting that she would vote against the proposal with “all (of her) conviction”.

“I would have like (the cemetery) to be multi-ethnic but for now it’s like that,” she said, with a sigh. “Eventually we’ll get to (multi-ethnic cemeteries). There are so many cultures, we don’t have a choice."

The Muslim community in the Quebec City region had been looking to get their own cemetery for several years. There are five other burial areas for Muslims in Quebec including two Muslim cemetery in Laval, about 267 kilometres away from the provincial capital. The other three are Muslim sections in denominational cemeteries including one, which was recently opened about 25 kilometres west of Quebec City.

Residents requested referendum in May

In May, 22 residents of Saint-Apollinaire asked for a referendum since the land would have to be rezoned. Opponents said that Muslims should not have their own cemetery, but be buried in the sections dedicated for them within non-denominational cemeteries.

The Islamic Cultural Centre of Quebec City, which was behind the cemetery project, said they wanted their own space so that they could be the owners of their burial plots instead of having to rent spaces in a non-Muslim cemetery.

Some local residents said they were frustrated about not being able to participate in the referendum.

“Saint-Apollinaire is a quiet and open town but there are some who have been here forever and do not want some changes,” said a resident of Saint-Apollinaire who had come to make his own funeral arrangements near the site. He admitted he was disappointed about not being allowed to vote and voice his opinion.

But even those who organized against the project weren't celebrating the results.

"It's extremely sad, it's like a couple that's breaking up — the people never got along and everyone loses in a situation like this," Sunny Létourneau, a local resident, told The Canadian Press.

She also said she would have preferred to see a cemetery for multiple religions.​

A month and a half ago, the Islamic Cultural Center of Quebec city sent a letter to politicians and other religious representatives asking for support. But none answered.

The fallout from the recent attack and the escalating tensions have left many local Muslims feeling scared.

"It's a refusal based on discrimination because we let Harmonia (the funeral home) have a cemetery. But when it's a Muslim one, they say 'no'," said Kesri. "What conclusion can we draw other than that this was discriminatory?"

Mustapha Skakni, a member of the Quebec City mosque, who spent the past few months going door-to-door was to explain the proposal, was disappointed about the entire process and its outcome.

"We need to take a look at what was behind it all," he said. "What led to a process like this one that allowed a minority to decide the fate of an entire community?”

While Saint-Apollinaire Mayor Ouellet said there was no plan B, Mohamed Kesri said he's not giving up and is hoping to find an alternative.

Editor's note: This article was updated at 12:30 a.m. on July 17 with additional quotes, details and background information.

Your first line is factually

Your first line is factually wrong. Two voters, not 19, made this decision. If only two people had changed their minds, the result would have been 17-18 and the cemetery would be approved. It's not the absolute number of voters that matters, but who turns out and on which side. This is a lesson Canadians need pounded home over and over and over. Will you fight for the right? Will you show up for the fight?

Although I'm not in favour of

Although I'm not in favour of allowing a community concern decided by only a few residents around the area of concern I still wonder why there needs to be a "specialized" cemetery for any group, religious or otherwise. Throughout our travels in Europe this became apparent to me as we noted special Jewish cemeteries, or church cemeteries with separate areas for Protestants and Catholics etc. God only knows if he's separating them when they get to the "afterlife", but I suspect the atomized remains are mingled together any old which way. The basic principle of entropy is randomness. Church/State separation on earth is a wise secular move amongst the living, but not amongst the dead. And so endeth my thoughts on that issue.

I think they're exploring

I think they're exploring that as well, more places with different religions buried together. I am not totally sure about the facts of this, but I think the problem in the Quebec City region is that there isn't anywhere close to home where Muslims can bury their dead. We'll be reporting more on this through the week.

This is very disturbing, very

This is very disturbing, very disheartening. If the terrorist attack on Quebec City Muslims weren't wrenching enough, we now have this rejection of a Muslim cemetery- and by only a few people, when all is calculated.

In my Canada when they are