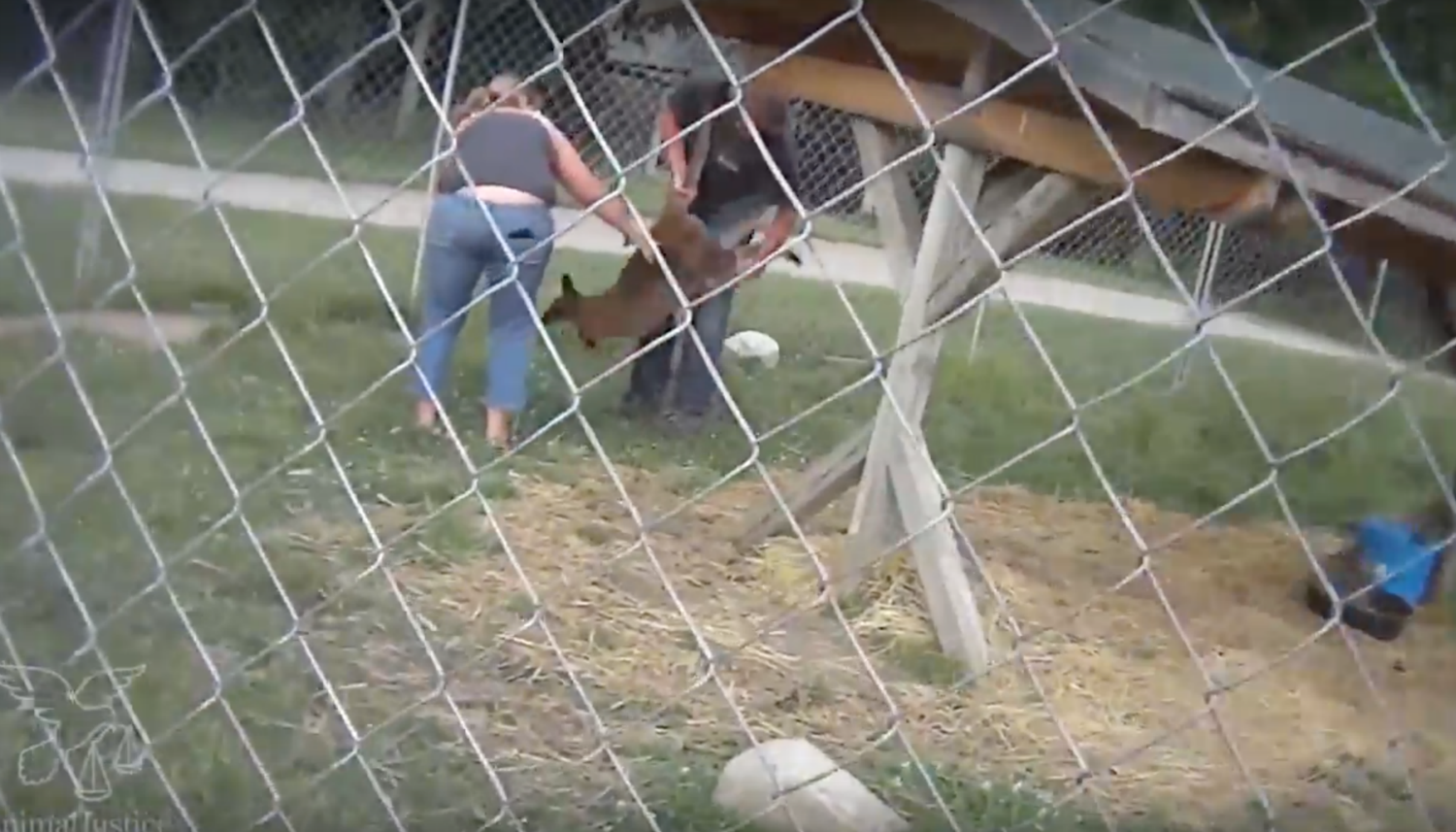 A wallaby is roughly handled by staff members at Papanack Zoo, roughly one hour east of Ottawa, during summer of 2016. Screenshot from footage provided by Animal Justice
Previous story
Next story

A southern Ontario roadside zoo has come under fire from animal welfare advocates after a damning video released on Friday appears to show several of its animals in deep distress, pacing and rocking in small enclosed environments, and being roughly handled by staff members.

Animal Justice, Canada's national animal law charity, released the secret footage and said it was taken by a whistleblower who worked on the grounds of Papanack Zoo in the summer of 2016. The facility is roughly one hour east of Ottawa.

Papanack Zoo did not respond to requests for comment on the footage, which appears to show a staff member — allegedly senior management — admitting to hitting a lion cub in the face and pulling baby animals away from their mothers. Another staffer, featured on the video, said that several Père David deers, which are now extinct in the wild, broke their necks at the zoo after running into the fence of their enclosure.

The video also appears to show employees using wires to pry open the mouths of a raccoon, skunk and bobcat for the purposes of a photo shoot. They are also seen manhandling the animals roughly.

"These animals are suffering and there’s no one there to help," said lawyer and executive director Camille Labchuk. "It’s troubling to see that there are no standards for animals used in entertainment."

Animal Justice is now calling on the Ontario government to create strict regulation for governing zoos and to create a licensing system for zoo operators whose permits are contingent on meeting designated standards for animal care and well-being.

A disturbing video showing animal mistreatment and distress at Ontario's Papanack Zoo was published on Fri. Aug. 11, 2017 by Animal Justice. The footage was shot by a whistleblower who worked at the zoo, roughly one hour east of Ottawa

The Ontario SPCA confirmed that it is "aware of animal cruelty allegations" against Papanack Zoo and has launched a formal investigation for breaches of provincial animal welfare laws. The organization's spokesperson, Melissa Kosowan, could not confirm at the time of publication whether the investigation was launched as a result of the new footage or from previous complaints against the facility.

"As this is an ongoing investigation, we can’t speak to details at this time," she told National Observer in an emailed statement.

Papanack Zoo shut down its Facebook page following the release of the video on Friday morning and did not respond to National Observer's requests for an interview. According to the company's website, however, its goal is to provide animals with a "comfortable, caring and safe living environment, while allowing the public an exciting, educational and fun place to visit."

The website also notes that Papanack came under new ownership in 2014 and is currently undergoing a "mini re-birth." Many of its enclosures, the company says, are being torn down and rebuilt to create more space for the animals. Those that will remain intact will "undergo a face lift" and have "enrichment added" to their living space.

It's not the first time the zoo has been criticized publicly — in February 2016, the company drew fire after shooting a 300-pound white lion that had escaped from the facility. Zoo owners at the time maintained that it would have been too risky to tranquilize the animal. In the end, Papanack issued a statement blaming the lion's escape on "human error," as it ended up in an unfenced park entrance.

Calls for change to Ontario laws

According to Animal Justice, both the case of the escaped lion and the brand new video raise serious questions about Ontario's lack of legislation governing zoos. The province is the only one in Canada that does not licence zoos, said Labchuk.

In Ontario, animal welfare is governed by the ministry of community safety and correctional services, which prohibits individuals from causing or permitting distress to an animal. Ministry spokesperson Andrew Morrison told National Observer that all animal welfare laws in the province are enforced through the Ontario Society for the Prevention of Cruelty to Animals Act.

He declined to address the Papanack Zoo video or answer questions about the prospect of licensing and regulating zoos specifically.

"The Ontario government takes the issue of animal welfare very seriously," he said in an email. "The Ontario government provides the OSPCA with $5.5 million in annual funding from to help them investigate any complaints of animal cruelty in the province... The OSPCA has also established, and maintains, a registry of zoos and aquariums to support a minimum of twice-yearly inspections."

The OSPCA's Kosowan confirmed that the regulation of zoos does not fall within the organization's jurisdiction.

"The licensing and regulation of zoos does not fall within our jurisdiction," she said. "If members of the public want to voice their opinions about the laws surrounding zoos, they should contact their local MP, MPP and/or municipality."

Labchuk added that the OSPCA Act does not give the government or OSPCA investigators the authority to shut down a zoo or require operators to meet certain metrics before opening one. Investigators may lay animal cruelty charges and eventually seize particular animals, she added, but not close down the business.

"The OSPCA Act sets out general standards for animal care and wild animal captivity that applies to everyone across the board, but it’s not specific to zoos," she explained. "Those standards are very minimal. It’s just a tiny, tiny piece of the puzzle."

Animal welfare advocates have, for years, called on the province to implement more stringent regulations for captive wildlife, specifically in zoos. The Papanack Zoo video arose just one day after animal cruelty charges against Marineland were dropped, following a conclusion from prosecutors that there was no reasonable chance of conviction on most of the attraction's 11 separate charges.

Last year, Ontario's Bowman Zoo decided to shut down after its owner was slapped with five animal cruelty charges for allegedly whipping a tiger. The charges were stayed after the man suffered a stroke and was deemed medically unfit to stand trial.

In June however, the Bowman Zoo reopened under a new name, The Clarington Family Adventure Park. It is co-owned by the same man who faced the cruelty charges and still has a menagerie of animals, including a giraffe, pygmy goats, lions, a lemurs.

"Even when OSCPA inspectors do take these cases to court, the Crown so far has withdrawn them," said Labchuk. "That leaves the government without any recourse and no authority to shut down a zoo."

A 2015 Insights West poll found that half of Canadians oppose keeping animals in zoos and aquariums.

The video released by Animal Justice on Friday's sparked strong reaction from some social media users:

For anyone who ever doubted that we were telling the truth, and for those who stated that the zoo had improved... https://t.co/Dcdt3zZruu

How do domestic pets keep getting caught and killed in fur traps?

By Elizabeth McSheffrey | News | January 15th 2016
State Of The Animal

The OSPCA hides behind the

The OSPCA hides behind the premise that they are not responsible for zoos, roadside "adventure" parks, and similar venues of animal cruelty, such as the previously-named Bowmanville Zoo, and the Papanack Zoo.

For the amount of money the Ontario government annually coughs up to the OSPCA to purportedly protect animals and prevent such animal cruelty (with recorded cruelty footage documented at these locations), it's merely buck passing. The Crown doesn't work hard enough to ensure the charges stick, if indeed any are laid.

As long as regulatory standards (are there really any?) are perpetuating this animal cruelty, and people find similar venues "entertaining", the cruelty will, unfortunately, continue.

BOYCOTT these places. Tell the Ontario government to regulate ALL venues using any animals for supposed "entertainment"!

Lobby your MPP that strict regulatory regimes need to be developed and enforced for similar venues to prevent further animal cruelty, and facilitate animal abusers to be punished and prevented from all animal contact in the future.