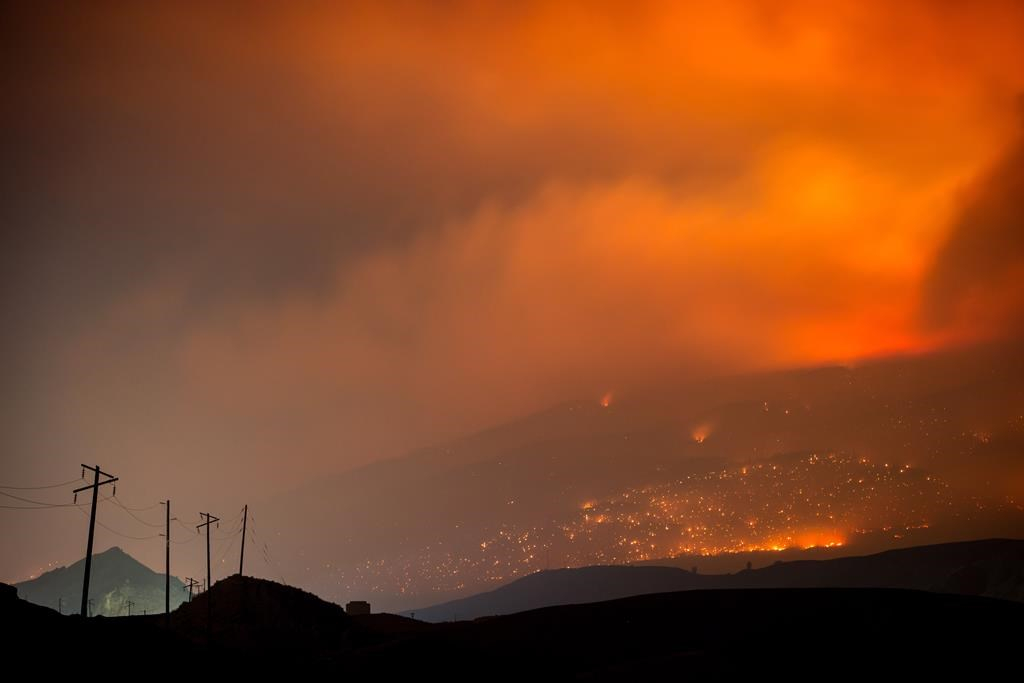 A raging wildfire blazes near Cache Creek, B.C. on July 10, 2017. Residents of small village were evacuated after flames took over the neighbouring Ashcroft, B.C. File photo by The Canadian Press
Previous story
Next story

Close to 900 have burned through 600,000 hectares so far this year, blanketing western North America with smoke. Fighting them has cost more than $230 million — and the season is far from over.

But it’s not just B.C. Thousands of people from the west coast province to California have fled homes as fires rage. Greenland is experiencing the largest blaze ever recorded, one that Professor Stef Lhermitte of Delft University in the Netherlands called “a rare and unusual event.”

Fires have spread throughout Europe, North America and elsewhere. In June, dozens of people died in what’s being called Portugal’s worst fire ever. Meanwhile, from Saskatchewan to Vietnam to New Zealand, floods have brought landslides, death and destruction.

What will it take for us to wake up?

What will it take to wake us up to the need to address climate change? Fires and floods have always been here, and are often nature’s way of renewing ecosystems — but as the world warms, they’re increasing in frequency, size and severity. Experts warn wildfires could double in number in the near future, with the Pacific Northwest seeing five or six times as many.

In the western U.S., annual average temperatures have increased by 2°C and the fire season has grown longer by three months since the 1970s, leading to “new era of western wildfires,” according to a recent study led by University of Colorado Boulder wildfire experts, published in Proceedings of the National Academy of Sciences.

Climate change doesn’t necessarily start the fires — lightning, unattended campfires, carelessly tossed cigarette butts and sparks from machinery are major causes — but it creates conditions for more and larger fires. Lightning, which causes up to 35 per cent of Canada’s wildfires and is responsible for 85 per cent of the area burned annually, increases as temperatures rise, with studies showing 12 per cent more lightning strikes for each degree Celsius of warming.

Drier, shorter winters and earlier snowmelt extend fire seasons. As the atmosphere warms, it holds more moisture, some of which it draws from forests and wetlands, and increasing precipitation is not enough to offset the drying. This means fuel sources ignite more easily and fires spread faster over greater areas.

Outbreaks of pests such as mountain pine beetles — previously kept in check by longer, colder winters — have also killed and dried forests, adding fuel to the fires. Because trees and soils hold moisture on slopes, fires can also increase the risk of flash floods when rains finally arrive.

The human and economic impacts are staggering — from property destruction to firefighting and prevention to loss of valuable resources and ecosystems. As human populations expand further into wild areas, damages and costs are increasing.

These adaptive measures are important, as are methods to prevent people from sparking fires, but our primary focus should be on doing all we can to slow global warming.

The Earth is trying to warn us

According to NASA, Earth’s average surface temperature has risen by 1.1°C since the late 19th century, with most warming occurring over the past 35 years, and 16 of the 17 warmest years occurring since 2001. Eight months of 2016 were the warmest on record.

Today’s wildfires are a wake-up call. If we are serious about our Paris Agreement commitments, we can’t build more pipelines, expand oil sands, continue fracking or exploit extreme Arctic and deep-sea oil.

Dr. Suzuki's last paragraphs says it all - this is the path we must follow for survival.

A Natural Resources Canada study on "Carbon Emissions/Removals in Canada's Managed Forests" (2013-12-04) estimated that between 1990 and 2011, annual emissions from wildfire ranged from a high of 264 million tonnes (Mt) of carbon dioxide equivalent (CO2 eq) in 1995 to a low of 11 Mt in 2000. In 2011, the managed forests acted as an overall net carbon source, releasing 84 Mt (CO2 eq) to the atmosphere.
Another study by NRC (2016-11-01) estimated that between 2004 and 2014, Canada's managed forests, as a result of forest fires and insects infestations, emitted around 329 Mt (CO2 eq) into the atmosphere and absorbed roughly 115 Mt, resulting in a net "source" of carbon of 214 Mt.
It is estimated that wildfires burn on average 2 million hectares of forest every year, twice the average area burned on the early 1970's. Scientists at the Canadian Forest Service predict that the area burned will double or more by the end of this century, because of warmer temperatures expected as a result of climate change.
The federal government doesn't take into account emissions from "natural disturbances" (e.g. wildfires, insect infestations such as the mountain pine beetle) in its reports on Canada's GHG emissions because it doesn't consider these emissions being a result (even partially) of human activity, suggesting that climate change (resulting of human activities) has no impacts on Canada's managed forests.