Here are the climate science benchmarks of the Quebec floods 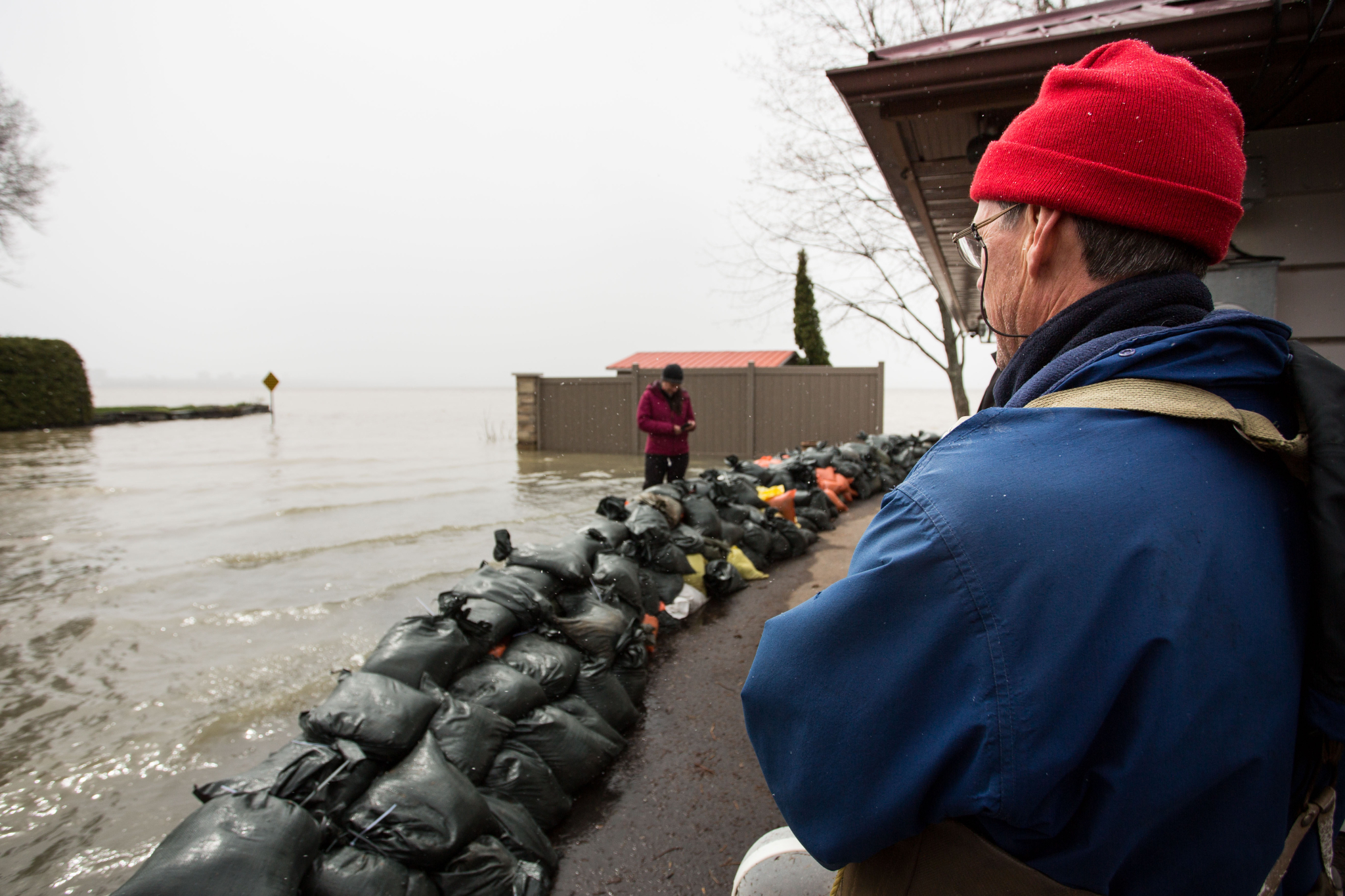 Outaouais resident Mike looks out on the Ottawa River from his mother-in-law's home in Gatineau, Que on May 8, 2017. The neighbourhood was inundated with floodwater over the weekend, one of 900 homes now affected in the city. Photo by Alex Tétreault
Previous story
Next story

Tri Vo peered out and surveyed the flooded landscape from a back porch door that was barricaded by sandbags and water pumps.

The small city park that usually occupies the space in front of him was instead a cold, choppy smudge of grey-blue murk. Only the top edge of two park benches poked through.

Usually, those benches would afford a great view of the Ottawa River, but today they were almost submerged by the water.

Vo and others have been using Parc Gérald-Millar’s benches as, quite literally, a “benchmark” for the rising water levels: if they stop seeing the benches, they know the problem has gotten worse.

“When the water first came up, I built sandbags. You can’t even see them anymore,” said Vo, 42, pointing out toward the water. “Our first attempt at sandbags are completely gone.”

Vo moved to Canada from Vietnam, and was checking up on a woman who he described as his “adopted Canadian mother.” She lives on Rue Lake in the Gatineau, Que. neighbourhood of Wychwood.

Vo is one of hundreds of neighbourhood residents who volunteered over the weekend to fill and stack sandbags, hand out free food and coffee and pump out basements.

Wychwood has seen some of the more serious flood damage to strike the city of Gatineau in recent days. More than 900 homes have been affected in this city, across the river from Ottawa in Canada's capital region, local officials have said. Almost 500 homes were evacuated, but the good news is that officials say water levels are stabilizing.

This is only a small part of an emergency that has struck Central Canada and other regions following one of the wettest Aprils in 100 years. Overall, thousands of Canadians have been struggling with rising floodwaters across the country.

The hardest-hit provinces of Ontario and Quebec have asked for federal assistance, and Defence Minister Harjit Sajjan said Monday that 1,650 Canadian soldiers have been deployed. Federal government offices were closed Monday in Gatineau, and will remain closed Tuesday.

Speaking outside the House of Commons, Prime Minister Justin Trudeau, who visited a flooded community west of Montreal over the weekend, said that “many volunteers and first responders are working very hard,” but “there is still much work to be done, and our thoughts are with all the families.”

‘We’re in a climate change emergency’

Such extreme weather is much more likely now because of climate change, scientists say.

As the greenhouse gas effect warms the planet, they say floods, droughts, mudslides and other extreme weather events are expected to occur more often, and with greater ferocity.

“Climate change is a global problem, but the reason we care about it is because it’s impacting us in the places where we live,” said Katharine Hayhoe, a Canadian who is the co-director of the Climate Science Center at Texas Tech University.

“It’s taking these weather patterns that we’ve seen before and...putting them on steroids, so to speak.”

In a warmer world, evaporation speeds up, increasing risk of heavy rainfall like we're seeing this week. Here's the trend since the 1950s: pic.twitter.com/mSsLjbF76O

In a warmer world, Hayhoe said that evaporation speeds up, putting more water vapour in the air for any given storm to pick up.

“It’s a very direct connection: the warmer it is, the faster water evaporates, especially out of the ocean, the more water vapor there is for any given storm.”

Paul Beckwith, who works on climatology in the Department of Geography at the University of Ottawa, also said flooding is being exacerbated by the “whiplash” of extremely wet or dry weather that is the result of climate change.

"We’re getting a lot more extreme weather events around the planet, whether that be torrential rains leading to flooding, or really hot and dry temperatures leading to drought,” he said.

He said the root cause was that the Arctic was warming faster than any other global hotspot. As white sea ice and snow cover give way to darker permafrost or open ocean, the process accelerates.

“I’ve been saying we’re in a climate change emergency, and therefore we have to respond as if it’s in an emergency,” he said.

'What we saw on Friday was crazy'

Among them was Lawyer Audrey Bureau, who said she has been coordinating some of the relief efforts ever since last Thursday when she started to get requests from her connections on Facebook.

Bureau, a city council candidate for Aylmer District who was also working as a senior advisor in Liberal MP Will Amos' office, said she decided to take matters into her own hands after struggling to get answers from the city on Thursday and Friday. “They had no plans for volunteers,” said Bureau. “They said ‘At this time we have no need for volunteers in Aylmer,’...I said it doesn’t make sense.”

She met a fellow volunteer, Michel Raymond, and together they started going through Wychwood to figure out who needed help.

“What we saw on Friday was crazy. There were people who had water up to the main level of their homes, like four feet of water everywhere in the home,” she said.

On Saturday, she posted the location of bags and addresses needing assistance, she said. “First thing you know, 25 minutes later, there were like 30 people there. An hour and a half later, 200 people there...2-3 hours later, we were through the entire neighbourhood.”

Raymond, 51, said he has been calling a company that has been supplying Wychwood with sand, and sending volunteers to pick them up.

Bureau said she doesn’t blame the city for being “underwhelmed with volunteers” and that people’s support just proved how much the community helped each other out.

“We don’t mind because we’ve been taking care of everything ourselves and everything’s going really well. I understand Gatineau’s really over their heads,” said Raymond.

A city official disagreed that it had neglected the area. The city has been providing close to 300,000 sandbags to various locations, said Gatineau spokesman Yves Melanson.

“We have four or five sites in the Aylmer sector where we’re providing, immediately, sand as well as bags for people to come and help,” he said. “We have over 900 employees that are working only on the flooding area.”

He said the city was actively involved throughout April and remains so, giving daily updates at press conferences and sending the message to people to let the city know if their area was impacted.

The city has 1,500 volunteers coming to fill sandbags, he said, and they are getting delivered as well. Even so, he conceded it was “a tremendous thing that we’re experiencing right now.”

Melanson urged residents to call 311 whenever they feel they need municipal assistance, especially if they think flooding is threatening their house. “Don’t wait for the following day.”

Nearby at Parc Louis-Roy, watching the sandbagging activity, were local Tim Horton’s owner Denis Lavallée and Sandra Lemaire, president of local residents’ association Vieux-Moulin. Both have been giving out free food over the weekend.

Lavallée, standing in front of a large coffee container, said Aylmer was his home town and he’s lived in the area for 40 years. “We try to do as much as we can,” he said.

“I can only supply coffee; coffee for me is my business, but look at the people getting together just to help out. It’s amazing.”

For her part, Lemaire had been making and handing out sandwiches to volunteers. She said she had spoke with Alymer’s Metro grocery store about donating ingredients, and there was “no hesitation.”

“I left with everything, made sandwiches and started delivering them,” she said.

“Aylmer’s a community, and even though we’re merged with Gatineau, it’s still a community.”

Area resident Robert Dufour was chatting with community members near the corner of Rue Beaulac and Rue du Triathlon near Chemin Queen’s Park, which had flooded from the nearby river.

Looking out over the river, Dufour said he was taken aback by the “enormity of the flooding.” He had friends who had been pumping out their basements only to watch as the river dumped more water back in.

“I’ve seen houses where water is up maybe three feet from the main floor, just in the Aylmer area,” he said.

Lucette, a former lawyer in her mid-60s who lives in a basement apartment a few steps from where Dufour was speaking, said the city hadn’t helped as much as she’d like with delivering sandbags.

Lucette, who declined to give her last name, said she had been calling city hall for three days.

“We didn’t have any assistance,” she said. “We feel like we’re a little bit neglected here.”

Meanwhile, retired public servant Mike spent the morning waist-deep in floodwater outside his mother-in-law’s house at the end of Chemin Hemlock, skimming dirt off the surface of water lapping up against the sandbags.

Mike, who also declined to give his last name, said he raised his family in Orleans but recently moved to the neighbourhood where his wife grew up and where her mother still lives. He said he has been working all weekend to protect the house.

“We started Friday, and there was a small group of us,” said Mike, as he took a break from skimming. He said 6-8 people laid around 1,200 sandbags by Friday night.

On Saturday, he went to get pumps, and by Sunday the water had come up much farther. Friends and 30-50 community members showed up, he said, including pickup trucks full of sandbags.

“Let’s hope Mother Nature behaves,” he said about his prospects for the future.

“They say it happens once every 100 years or so. Hopefully we won’t see it again, but who knows.”

Editor's note: Gatineau residents can get flood updates online, including an interactive map guiding people to services and centres where they can collect sandbags. The city of Ottawa has set up a site to coordinate volunteers who want to help with relief efforts. The Insurance Bureau of Canada lists tips on how to help protect your home from water damage, as well as how to start the insurance claims process.