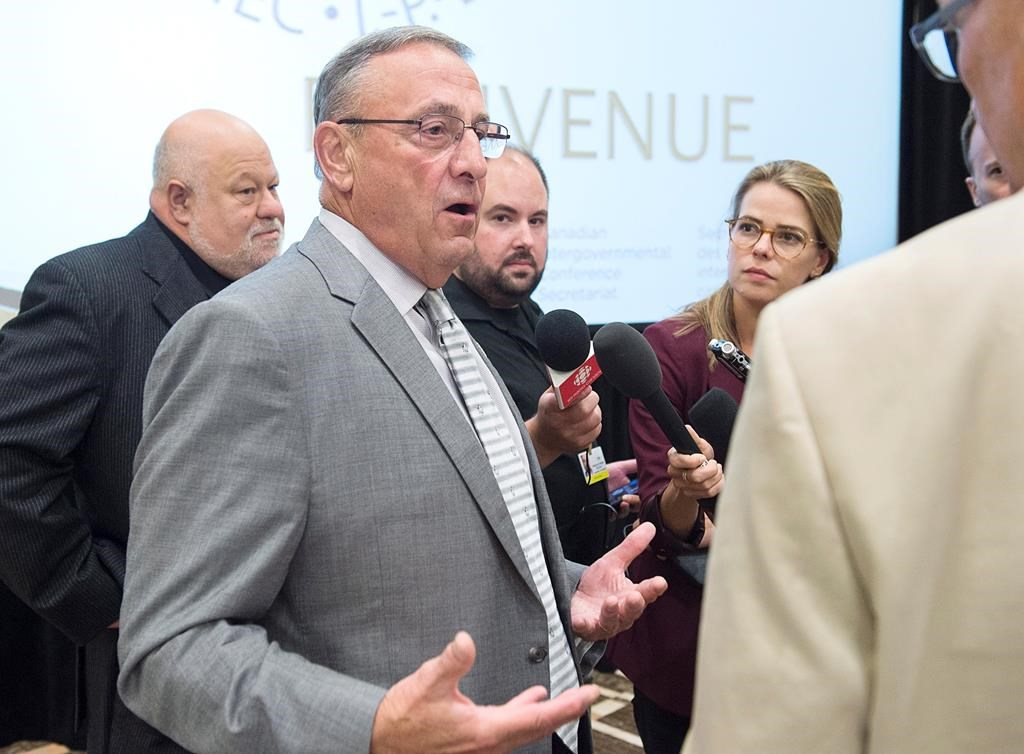 A key ally of Donald Trump says Canadians should understand the U.S. president believes in free trade, and they shouldn't read too much into what they hear.

Maine Governor Paul LePage, in Charlottetown for a meeting of Eastern Canadian premiers and New England governors, said he's spoken to Trump on the subject, and he is confident any issues with NAFTA "can be fixed."

"Don't read in too much in what you sometimes hear. He really truly believes in having free trade and good, honest trade between the two countries. He really does believe that."

Trump again suggested Sunday that the North American Free Trade Agreement should be terminated, tweeting that both Canada and Mexico are being "very difficult."

It was the first time that Trump has complained about Canada's role in the talks, which began earlier this month between Canada, the U.S. and Mexico.

But LePage, who campaigned several times with Trump, said Canada likely has little to worry about.

"I don't really believe he's concerned as much over Canada as much as maybe Mexico."

Frank McKenna — a former Canadian ambassador to the United States and former premier of New Brunswick — also said people should not get caught up in Trump's tweets.

McKenna, now deputy chair of TD Bank Group, was the luncheon speaker at the conference of premiers and governors. He said he remains confident that the Canada-U.S. relationship will be strong during and after negotiations on both NAFTA and softwood lumber.

"The relationship is massive, it's integrated, and it is highly supported on both sides of the border. At the end of the day the government of Canada is handling the file beautifully in my view and I think we're going to come out eventually with a softwood lumber agreement and, as well, a new NAFTA."

LePage has proposed that the leaders gathered in Charlottetown join together on softwood lumber. He wants them to write a letter supporting exemptions on duties for softwood lumber from Atlantic Canada and Quebec.

LePage said the pressure for the duties is coming from the U.S. lumber coalition.

He said the U.S. industry is being irresponsible and if new, hefty duties remain in place there will be collateral damage to economies on both sides of the border.

In June, the U.S. Department of Commerce hit Canada with an additional 6.87 per cent in preliminary average anti-dumping tariffs, leaving the industry facing average duties of about 27 per cent.

The decision exempts the other three Atlantic provinces, but New Brunswick — exempt from such tariffs in the past — is not.

LePage said the issue needs to be resolved quickly — noting that Texas is going to need a lot of softwood lumber to rebuild in the aftermath of Hurricane Harvey.

"When you get eight feet of water in Texas, there's going to be a lot of lumber needed in the next couple of months to rebuild that state. And it's going to be coming from Canada and the U.S."