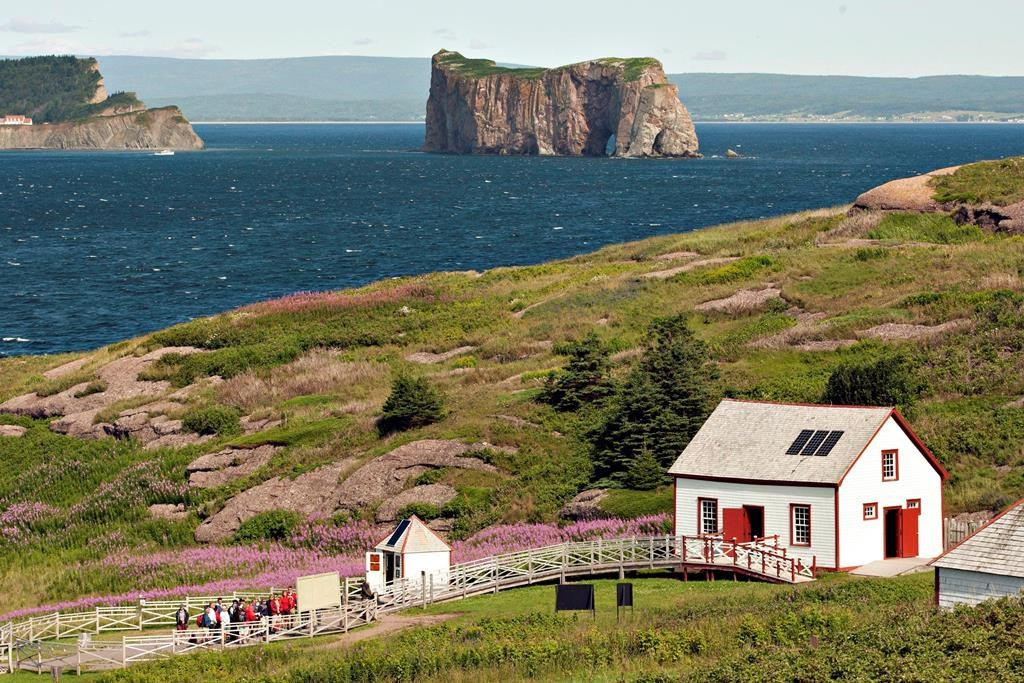 The Bonaventure Island is shown overlooking the Perce rock on July 25, 2012. File photo by The Canadian Press/Jacques Boissinot
Previous story
Next story

The windswept archipelago of Iles-de-la-Madeleine used to spend most of every winter firmly encased in the ice of the Gulf of St. Lawrence, protected from the worst effects of winter storms.

But warmer temperatures in recent years mean the surrounding waters are more often ice-free, leaving the eastern Quebec island chain at the mercy of battering waves that eat away at the coastline and put vital infrastructure at risk.

"When I was young and came home to the islands for Christmas, as of January the islands were surrounded, we were trapped in the ice," Serge Bourgeois, planning director in Iles-de-la-Madeleine, said in an interview.

"Now, the difference is so palpable that we're more likely to remember winters when there is ice than those when there isn't."

The town has recently had to move observation sites and a bicycle path away from the receding coast, and is facing the prospect of costlier adjustments in the next five years as the erosion creeps closer to more crucial infrastructure, according to Bourgeois.

Other towns along the gulf and the St. Lawrence River are facing similar issues, as warming temperatures accelerate the age-old processes of erosion and flooding, according to Guillaume Marie, a geography professor and erosion specialist at the Universite du Quebec in Rimouski.

With the funding of the Quebec government, the university has embarked on a multi-year project to study coastal resilience and develop tools to help eastern Quebec communities adapt to the realities of climate change.

In many cases, this will mean making difficult and costly choices about what infrastructure to save and what to sacrifice, Marie says.

Possible adaptation measures can include building rock walls or piles of stones, building bypasses around towns in case main roads are damaged, adding sand to beaches and planting vegetation on dunes — a natural way to try to both break up waves and prevent erosion.

The best solution, Marie says, is to avoid building in risky areas — but that doesn't help people who already live in those zones.

For now, the university is consulting with towns in order to help them assess priorities, evaluate what's working, and develop future strategies to mitigate or repair the damage.

In many towns, the process is already underway.

Perce, near the tip of the Gaspe peninsula, is in the midst of a vast coastal reconstruction project that gained new urgency last winter after its seaside boardwalk was washed away in a winter storm.

The project, which is being financed by the province, involves first shoring up the beach with huge volumes of sand and pebbles, followed by an eventual boardwalk rebuild.

Just north of Perce, the town of Gaspe has tightened its regulations to prevent new construction in certain zones after a higher-than-usual amount of flooding in the last 10 years, with more studies underway.

"We are committed to continually refining our knowledge of these areas and studies are currently under way to characterize our wetlands and coastal areas," Gaspe spokesman Jerome Tardif wrote in an email.

Some towns, including Iles-de-la-Madeleine, have already had to make the unpopular decision to relocate people and homes, and Bourgeois says more tough decisions are coming.

There's no question the roads that link the islands will need to be shored up. But what about the La Grave historical site, the location of the island's earliest settlement and fishery?

"What do we do, as a collective?" he asked "Do we let the site go or try to find adaptation scenarios and put a price on it at the end of the line?"

Bourgeois says that so far, he feels the Quebec government has been supporting towns' efforts, especially when it comes to funding research and studies.

But he's wondering how the provincial and federal governments will react down the line, when more and more coastal towns are faced with huge rebuilding costs they can't handle themselves.

"If you add up the needs of coastal cities across Quebec and Canada, it's going to be astronomical," he said. "It's then that we'll know if governments are with the communities."