McKenna says she is 'done' with 'ridiculous' Tory language on environment 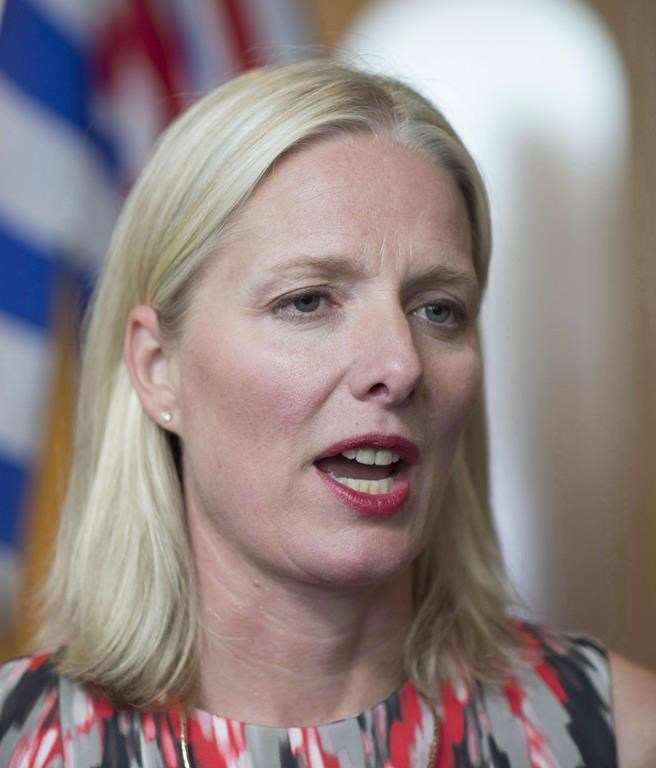 Minister of Environment and Climate Change Catherine McKenna speaks to the media in downtown Vancouver on Thurs. Aug. 23, 2017. File photo by The Canadian Press/Jonathan Hayward
Previous story
Next story

Canada's push to get climate change action included in a revamped North American Free Trade Agreement is turning into a heated domestic dispute just as it makes its debut at the official negotiating table.

The NAFTA schedule obtained by The Canadian Press showed the environment was on the schedule for seven hours of NAFTA talks in Mexico City Monday, and another seven hours on Tuesday.

It could be one of the more contentious chapters, as significant differences of opinion about the environment exist between the Liberal government of Prime Minister Justin Trudeau and U.S. President Donald Trump.

Those differences largely exist domestically as well and were being played out in social media over the Labour Day weekend.

She was responding to comments O'Toole made to The Canadian Press in which he accused the government's push for environmental protections, Indigenous rights and gender equality as "virtue signalling" as part of the image-building machinery around Prime Minister Justin Trudeau.

"And so done with ridiculous language from #CPC like 'virtue signalling,'" McKenna tweeted. "We will continue to stand up for Canadian values at home & abroad."

She wrote a lengthy response on Facebook noting it was his party under Prime Minister Brian Mulroney that first included the environment in a Canadian trade deal with NAFTA's parallel environment agreement.

"We are currently witnessing the largest forest fire in British Columbia's history, the Atlantic Ocean recording record temperatures, and the second flood of the century in 12 months in Windsor," McKenna wrote. "And the conservatives are still saying that the environment and the economy can be separated! Climate change is real and environmental protection is essential. It is time for the conservatives to understand the message."

At the NAFTA table, Canada and the U.S. both want the environment agreement to be pulled into the main NAFTA papers rather than existing as a side deal. They also both want provisions to prevent NAFTA countries from loosening environmental restrictions as a way to attract investment.

Where they differ however is on climate change. While the U.S. stated one of its NAFTA goals was to include a requirement for countries to live up to their obligations under multilateral agreements, the U.S. is in the process of withdrawing from the biggest of those agreements on climate change - the Paris accord.

Trump has previously referred to climate change as a "hoax" and has started undoing policies of the former administration of Barack Obama, such as fossil fuel production restrictions, which he says have hurt the U.S. economy.

Canada would like a new NAFTA to specifically reference climate change and prioritize measures to help combat it.

University of Lethbridge politics professor Chris Kukucha thinks that hill will prove too steep for Canada to climb and will have to be abandoned.

"They will try, they'll bring it up because that's the government's mandate," he said. "At the end of the day I think the people sitting at the table know that's a non-starter, it's not going to be there," he said. "Not with that administration in the United States."

Kukucha said the domestic political battles over the environment are unlikely to have any impact at the negotiating table, although he said the U.S. could use it as a wedge issue against Canada on areas Canada doesn't want to give up such as supply management.

That the environment is a Canadian priority for NAFTA was underscored last week when McKenna created a NAFTA advisory council on the environment made up of two former premiers, a former provincial finance minister and representatives from environment and industry associations.