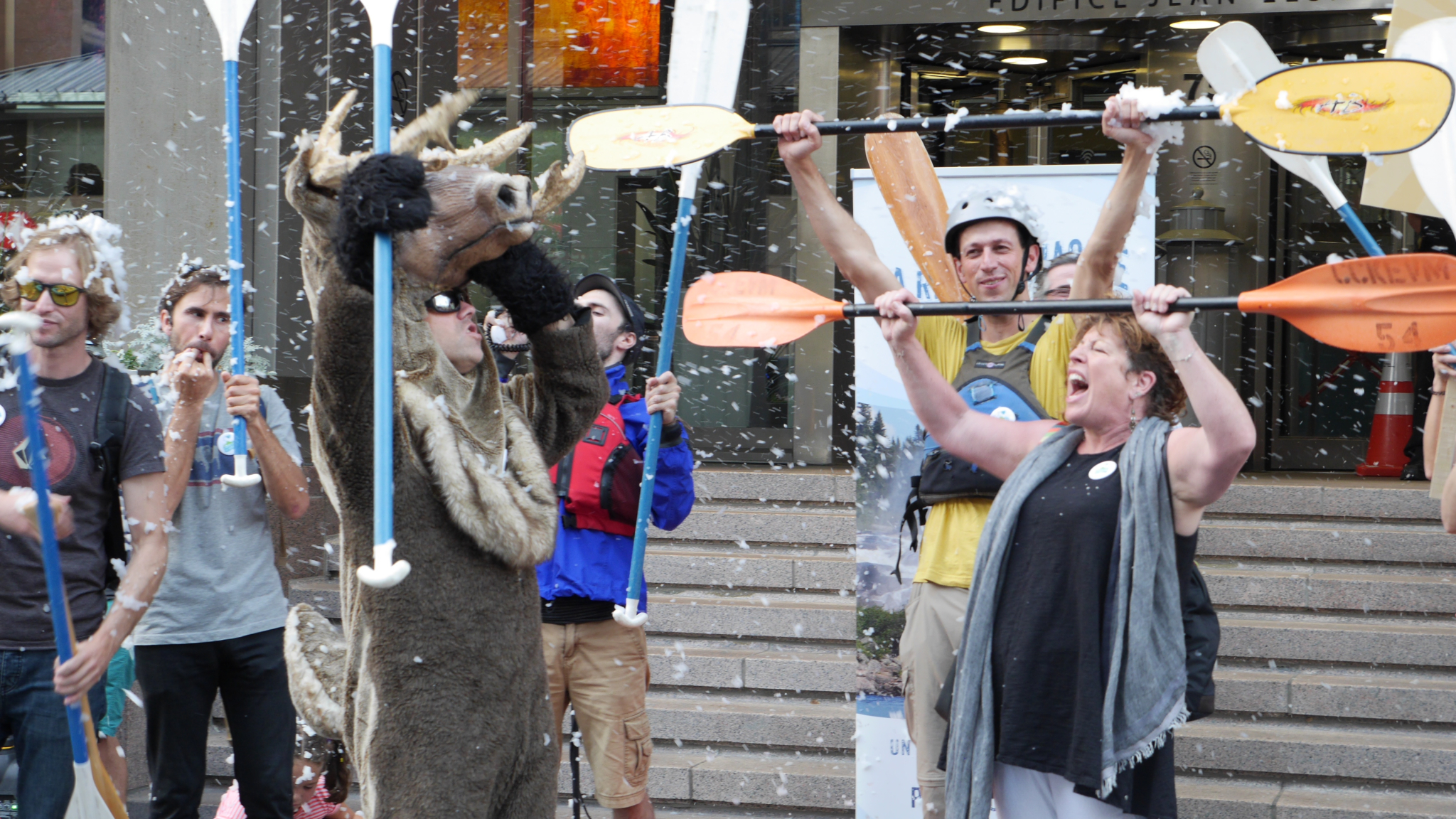 Protesters at a rally to save a river in Quebec cheered when they learned crown corporation Hydro Quebec is not planning on building a dam on it. Photo on Sept 14, 2017 by Clothilde Goujard
Previous story
Next story

Valérie Bouchard was in for a special surprise on Thursday evening.

The cancer survivor came all the way from Quebec City to participate in a rally in Montreal to protect the Magpie River, a pristine place in eastern Quebec on the north shore of the St. Lawrence River.

The area is known for its majestic scenery, including the hills, the cliffs and the imposing untouched wilderness of the boreal forest. It also holds a special place in Bouchard's heart.

And on this hot and humid late summer evening in Montreal, she was able to celebrate an unexpected announcement as the Quebec government's energy corporation, Hydro-Québec, promised to protect the river, abandoning plans for a major hydroelectric development project.

Last year, she went on a healing expedition organized by Foundation Sur La Pointe des Pieds for teenagers and young adults who survived cancer. A group of about 16 participants spent a week on the river. They were dropped by a helicopter and rafted down the river. They rafted during the day and camped at night, sharing stories about their ordeals.

"The river, the boat — they're a really a good reflection of life and all the obstacles you can have. You tell yourself in the rapids that you'll never be able to raft through them. But no. We're a gang, we're a team... If we are with a good team, if we have a good attitude with good guides, we can get through all the rapids we need to get through," she told National Observer.

"When I see how important the healing expedition was, (I realized) we need places to be protected and preserved," she said. "The river is good for everyone, not just for cancer survivors. Anyone could benefit from expeditions."

Environmentalists celebrate a surprise announcement by Hydro-Québec on Sept. 14, that it won't build a hydroelectric dam on the Magpie River in the eastern part of the province. Video by Clothilde Goujard

We won't touch it, says Hydro-Québec

Hydro-Québec's surprise announcement to abandon plans to dam the popular river followed intensive opposition from environmentalists and some locals from the region.

"It is not in our strategic plan anymore. It is not (among) our projects," Abergel said, drawing some cheers from the crowd of about 50 protesters."Be reassured, there is no (hydroelectric) project (for) this river, (and) we won't touch it. We won't go there."

He added this decision was based on the fact that Hydro-Québec was not looking to increase its energy supply at this time.

CPAWS has been battling for nearly 15 years to put a stop to the project and the crowd was ecstatic, erupting in cheers when they heard the news.

Alain Branchaud, director of the Quebec chapter of the conservation group and a former Environment Canada scientist, described the stunning announcement as a victory.

"We are completely surprised," he told National Observer, calling it an "extraordinary announcement."

"We've been fighting for this for the past 15 years and now I think there's a way to make (this protected area) happen in the next months."

Hydro-Québec had previously targeted the Magpie River as a potential development site in a strategic plan of energy projects for 2009-2013. It had estimated that the area could help generate up to 850 megawatts of power.

The Bureau d’audiences publiques sur l’Environment (BAPE), a provincial organization that holds public hearings to assess the environmental impact of industrial development when mandated by the environment ministry, had previously found a number of reasons why the Hydro-Québec project should be stopped. Among those was an assessment that the proposed development would only produce a modest contribution to the corporation's total generating capacity.

One of the world's greatest destinations for white-water rafting

National Geographic magazine has identified the Magpie River as one of the world's greatest destinations for white-water rafting. The Quebec Chapter of CPAWS and citizens from the region have also argued that the river can generate economic benefits through tourism in the remote north shore region of Quebec.

Their fight to make the Magpie river a protected area is part of a wider CPAWS strategy to increase protection of Canada's biodiversity.

Despite Canada's commitment to protect 17 per cent of land by 2020 under the United Nations Convention on Biological Diversity, the environmental organization had noted that both Quebec and Canada are lagging behind in their conservation efforts. The province has so far protected 9.35 per cent of its landscape and the whole country is at of 10.6 per cent. In comparison, British Columbia has protected 15.3 per cent of its land and Alberta 12.37 per cent.

While this is a "victory" according to Branchaud, he hopes the announcement will push the Quebec government to establish a protected area for the Magpie River.

"Let's go forward and turn Hydro-Québec's disinterest for this river into a political will to create a protected area," he said.

"Now, the main obstacle has just been removed, it's fantastic. We need to celebrate this. But the project of protected area itself is not done yet so we're going keep an eye (on the file) but for us, it's a incredible victory."