'Nothing made it:' Ranch that offered trail rides gutted by Waterton wildfire 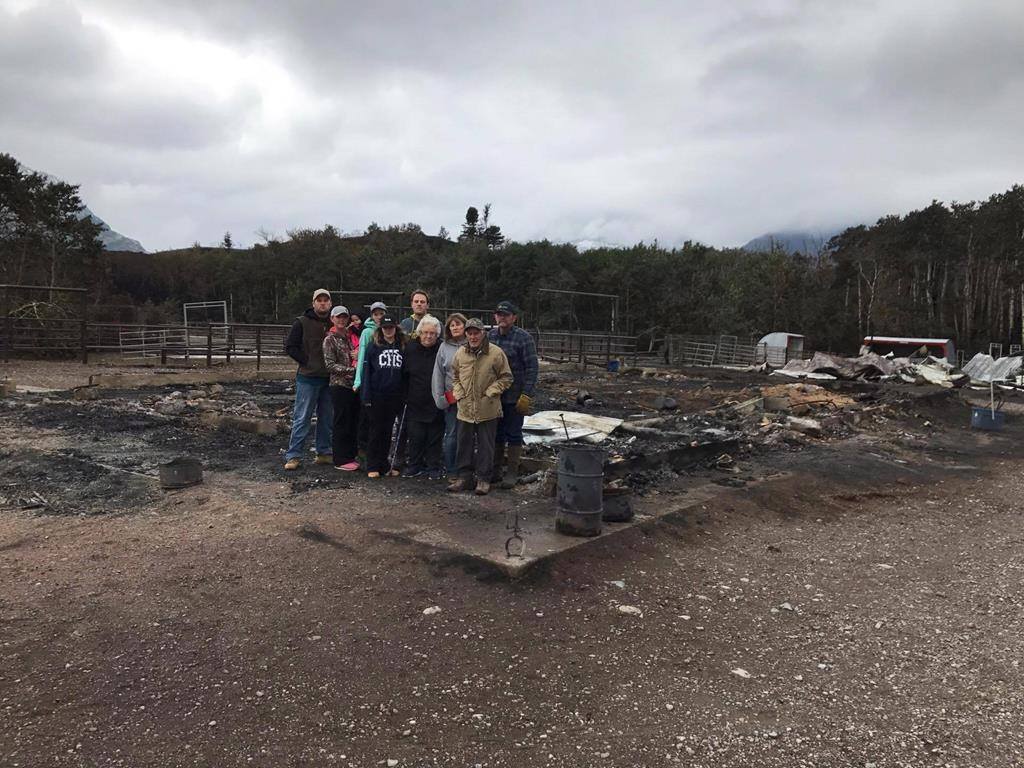 Members of the Barrus and Watson families, who run Alpine Stables, a ranch inside Waterton Lakes National Park, are seen on the lot following a wildfire in this undated handout image. Handout photo by Azley Watson Berezay
Previous story
Next story

A family-run horse ranch that was gutted by a southwestern Alberta wildfire this week was a major fixture in Shelby Barrus's childhood.

Alpine Stables, which offered guided trail rides to visitors in Waterton Lakes National Park, was founded nearly a half-century ago by her great-aunt and great-uncle.

Barrus, 22, recalls staying there as a girl and waking up in the morning to see bears ambling through the yard. At night she'd go to sleep to the sound of elk bugling.

She has worked at Alpine Stables since she was 14, first helping to lead guided rides, now in the office.

"Waterton has been a big part of my life, my family's life," she said.

"It's been really hard. It's a tough loss for us all."

Some of her relatives were allowed in for an hour Friday morning to take stock of the damage. The house and barns were destroyed.

"Nothing made it," she said.

Fortunately, all of the ranch's 50 horses had been removed Sept. 5, when residents of Waterton were warned they might have to leave on short notice as the fire raged in British Columbia just outside the park.

A mandatory evacuation order was issued three days later when the fire was about to cross into the park.

Parks Canada leases the land for the stables to the Barrus family, so they have yet to sort out any rebuilding plans.

The agency detailed the damage from the fire on Friday. It confirmed that homes and businesses within the park's townsite were spared.

But in addition to Alpine Stables, the visitor centre was razed as was the structure at the East Gate warden station, along with its equipment and vehicles.

One of the largest campgrounds, Crandell Mountain, was also significantly damaged, and outlying infrastructure around the Parks Canada operations compound and a bison paddock was hit.

The main building of the landmark Prince of Wales hotel, standing high on a bluff with a spectacular view of the lake and townsite, was unscathed, but some facilities surrounding the stately wooden 1920s railway hotel were harmed.

The popular Red Rock and Cameron Lake day-use areas and facilities, including an Alpine Club of Canada hut, are fine. There was minor damage outside the golf course clubhouse.

Parks Canada said it will continue to assess the damage.

"Due to the high intensity of the fire, there are a large number of danger trees, rock falls, and other hazards that remain throughout. Moreover, guardrails, signage, and other minor infrastructure were heavily impacted."

Damp, cool weather was helping firefighting efforts in the area and the wildfire had not grown larger than 360 square kilometres.

Parks Canada cautioned that the fire was still out of control and risks remained.

John Barlow, member of Parliament for the area, said he did a flyover of the park and surrounding area earlier in the week.

"I have to say, the damage to Waterton is devastating," he said in a Facebook video. "It looks like about 30 per cent of the park has been severely damaged by the fire, about 70 per cent of the forested area has been lost."

In addition to the Waterton townsite, a portion of the Municipal District of Pincher Creek just to the park's north remained under an evacuation order.

Residents have been allowed back into a larger area elsewhere in the Pincher Creek municipality and an evacuation order for Castle Mountain Resort has been lifted. Evacuees have also been able to return to parts of Cardston County and the Blood reserve, a First Nations community southwest of Lethbridge.