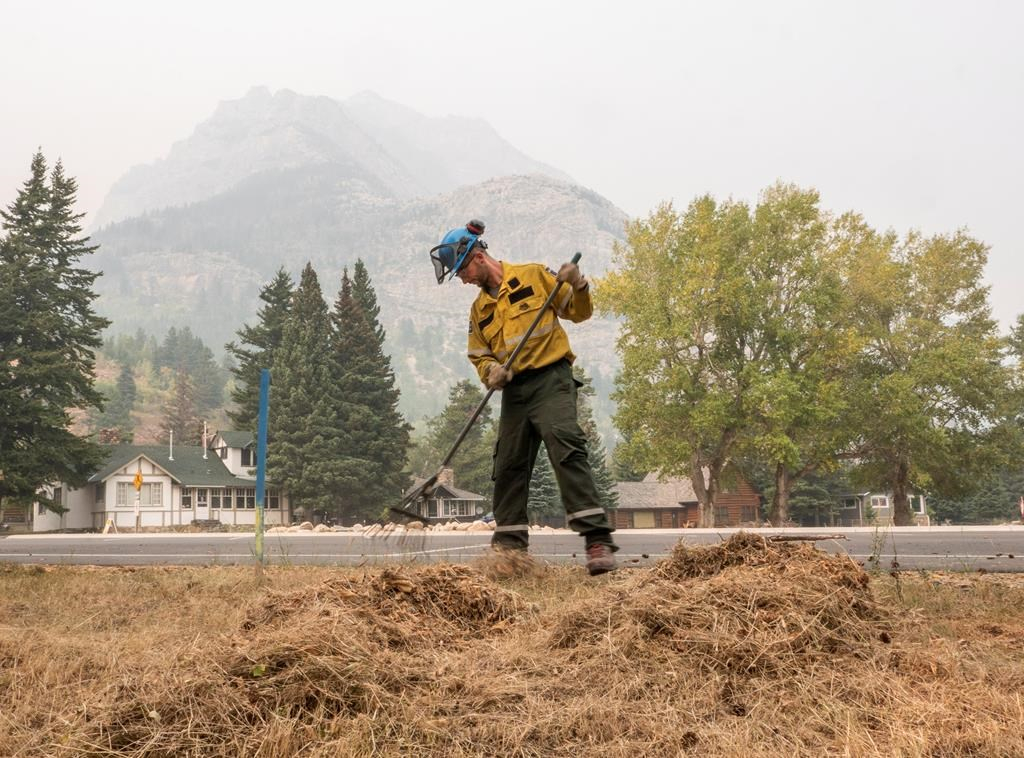 A fire crew member rakes up dead grass near the town of Waterton, Alta. in this undated handout photo. Handout photo by Parks Canada, Nicholas Alexander
Previous story
Next story

A popular national park in the southwestern corner of Alberta was under a mandatory evacuation order Friday because a forecasted shift in wind was expected to heighten the wildfire danger.

Waterton Lakes National Park said the order covered the townsite and all other areas of the park except for Highways 5 and 6 and the Chief Mountain border crossing into the United States.

"The safety of visitors to Waterton Lakes National Park, residents of Waterton, employees, fire crews and emergency responders is a top priority for Parks Canada," the park said in a news release.

"A change in weather conditions has led to increased potential danger and hazards from the Kenow wildfire that necessitate the evacuation of the park."

The park was closed to all incoming traffic except for emergency vehicles.

Parks Canada told people earlier in the week they should be ready to leave on short notice as the fire burned mostly in British Columbia on Waterton's western boundary. But on Friday the flames covering almost 80 square kilometres advanced into the park.

Matthew Anderson, a wildfire information officer, said heavy smoke was making it difficult to discern where the edge of the fire was in relation to the townsite.

The national park is under federal jurisdiction, but the province was working closely with Parks Canada, Anderson said.

He said there were 245 firefighters, 24 helicopters and 15 pieces of heavy equipment positioned near Waterton and more resources were available elsewhere in the province.

A team of Type 1 firefighters — the most experienced — was based in the nearby community of Pincher Creek and another crew was getting rid of fuel sources near the U.S. border in an effort to contain the blaze.

The Calgary Fire Department said it was sending a team to co-ordinate with Parks Canada in Waterton in addition to 16 more firefighters, two mechanics and some equipment.

Anderson said the wind was expected to begin blowing from the southwest by Friday afternoon.

"What that means is it starts driving the fire toward Alberta more."

RCMP Cpl. Curtis Peters said there were around 200 to 250 people in the town on Friday morning and by the afternoon people were leaving in an orderly fashion.

He said police would be going door to door to ensure everyone had left.

"We've gone from the 'prepare' to the 'now-it's-time-to-go' stage," he said from the gates of the park, where he said it was windy and smoky.

Peters said the fire was several kilometres away from the townsite, but the wind could funnel it toward the town in the coming day.

"That's really the main reason that they've taken the pre-emptive measure of getting everybody out in advance of that."

An evacuation centre was set up in Pincher Creek. Peters said the air was smoky there, but it was not expected to be at risk of wildfire.

Pincher Creek Reeve Brian Hammond said he expected the municipality to take in 80 to 100 people with nowhere else to go.

"This is a time of significant tension and stress and people are worried. We understand that," he said.