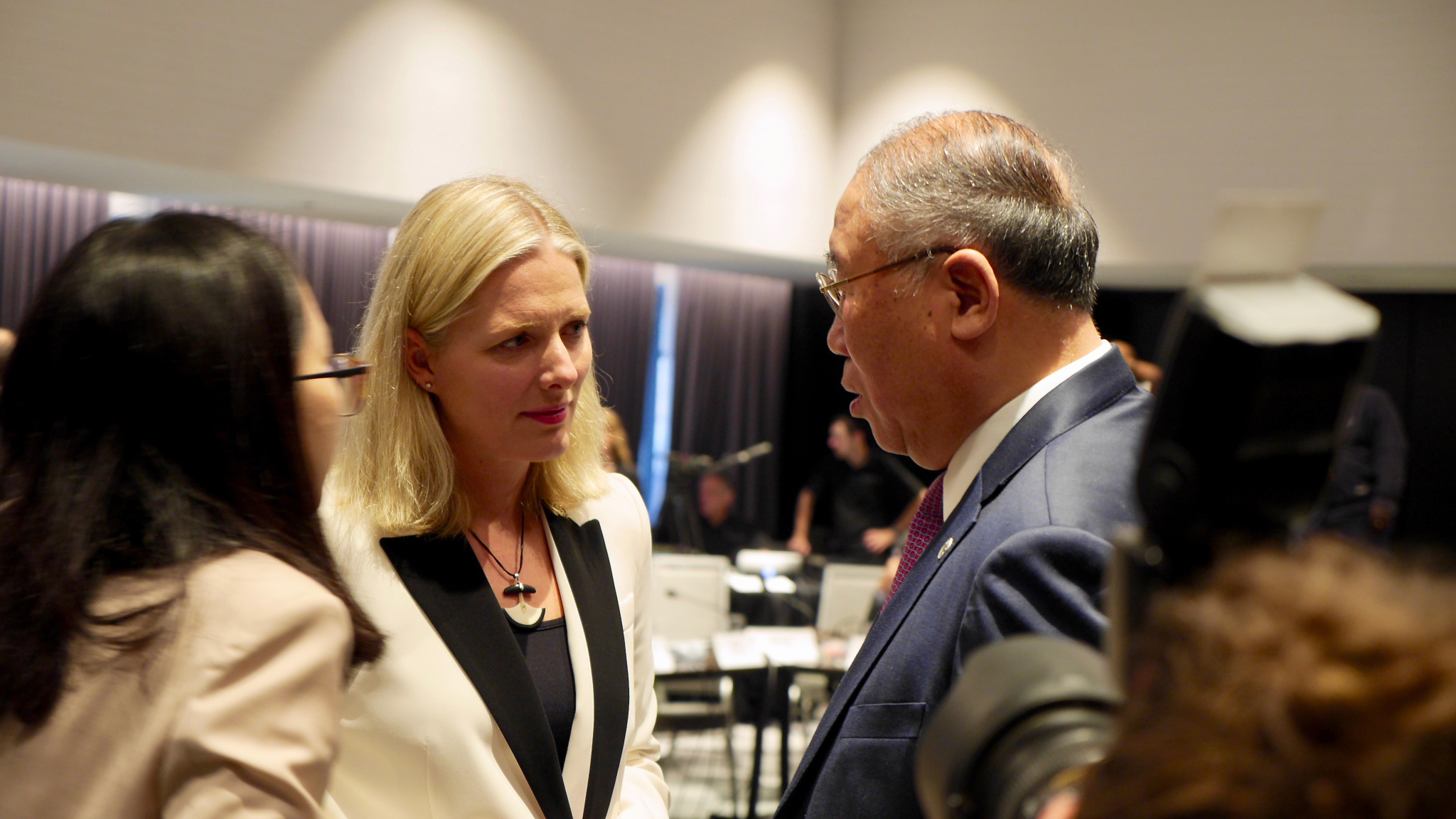 President Donald Trump's White House issued a denial on Saturday after an international negotiating session in Montreal heard some unexpected comments suggesting the U.S. administration was softening its stance on climate change.

Two hours into climate change negotiations with representatives from 33 countries, European Union Commissioner for Climate Action and Energy, Miguel Arias Cañete told journalists that they had been informed the United States would no longer be seeking to renegotiate or withdraw from the international climate change treaty that was signed in 2015.

Instead, he said a U.S. representative at the Montreal meeting, Everett Eissenstat, told them the Trump White House was reviewing how to engage in the Paris Agreement.

“We will have another meeting in New York with American representatives to assess what’s the real United States position but it’s a message which is quite different from the message we got from President Trump in the past,” said Cañete.

This position, as described by Cañete, runs counter to remarks made by President Trump in June when he said the U.S. wanted to renegotiate the Paris deal.

Eissenstat, Deputy Assistant to the President for International Economic Affairs declined to speak to reporters.

White House spokeswoman Sarah Huckabee Sanders later denied that there had been any change in the Trump administration's position.

Our position on the Paris agreement has not changed. @POTUS has been clear, US withdrawing unless we get pro-America terms.

But the apparent shift in U.S. policy left many observers stunned, including former President Barack Obama's last ambassador to Canada, Bruce Heyman, who expressed his surprise on social media.

The unexpected turn of events came after officials from Canada, China and the European Union had insisted the treaty is irreversible and non-negotiable.

“This meeting was really a message to negotiators that we're all in when it comes to advancing the work program, that we need to be ambitious and that we support Fiji this year” said Canadian Environment and Climate Change Minister Catherine McKenna at an afternoon news conference. McKenna added she was pleased with the successful meeting.

She also later said on Twitter that she didn't observe any changes in the U.S. position, but noted that all parties recognized that there were economic opportunities to seize from embracing clean growth.

While we understand the US position on the #ParisAgreement has not changed we are pleased they continue to engage.

We all recognize the economic opportunity of clean growth, including clean energy.

The ministerial meeting — co-hosted by Canada, China and European Union — brought together governments who were discussing how to implement the Paris agreement at a global level. They also reviewed the various policies taken by countries two months before the next United Nations climate change summit, COP 23, in Bonn, Germany which will be presided by Fiji.

Hosts of the meeting opened the meeting in the morning by calling for “ambitious climate policies” to keep the climate momentum going.

Trump has previously said climate change was a hoax invented by the Chinese to steal American manufacturing jobs. He declined to send Scott Pruitt, head of the U.S. Environmental Protection Agency, to the Montreal meeting, instead sending Eissenstat.

But the other major countries made it clear they were committing to pursue active and ambitious policies.

“In the case of collapse of ambitions by the United States, the European Union will make sure to make our planet great again,” said European Union Commissioner for Climate Action and Energy, Miguel Arias Cañete at the press conference.

Throughout the day, various government representatives, including McKenna, also sent words of encouragement for the United States to remain engaged.

“As everyone in the group probably knows, Canada and the United States have an incredibly close relationship, friendship, trade and a long history of environmental cooperation and we certainly are very pleased to see you here today,” Minister McKenna said in her opening remarks to the meeting as she glanced at Eissenhat.

Gary Cohn, the chief White House economic advisor will be holding a meeting with senior climate and energy ministers from several countries ahead of next week’s United Nations General Assembly meeting.

“(I expect) all of the actors around this table, including the United States to take action once and for all that (confirms) the Paris agreement is irreversible. We don’t touch it,” he said to journalists midway into the meeting.

“For once, we have to understand that (climate change) is a universal issue that needs to surpass national issues. The worst danger lying ahead of us is to get used to tragedies.”

Among foreign and Canadian representatives, there was a spark of hope that if the American federal government was not willing to work hand in hand with its partners, other stakeholders will work twice as much.

“Let’s keep in mind that at a subnational level, in states, cities, big and small economic actors, believe me their dynamism will maybe compensate with this obstacle that has been imposed by the attitude of the administration of the American president,” said Hulot.

The discussions also reviewed the pace of implementation of climate policies arising from the Paris agreement, with Hulot noting the importance of reinforcing commitments, in keeping with each country's means.

“The Paris accord is dynamic which means we can’t just stay there. (Climate) phenomena are going faster than our own commitments so we can’t wait necessarily for 2018 or 2020,” said Hulot.

Chief negotiator for the next international climate change summit, to be hosted in Bonn, Germany, Nazha Shameem Kahn said negotiators didn’t have the “luxury” of time. But she explained that implementing a framework was complicated because of the accountability and transparency mechanisms as well as national circumstances of each country.

"Paris is not going to work if we don't ensure that the rules for the implementation of Paris are going to be fairly framed, they're going to be framed in a way that all states are all sure to follow them and to respect them and to tailor their national policy in accordance with them,” she said to journalists.

She has hope that the next summit in Bonn, COP 23, will be another turning point in the fight against climate change.

“I think COP 23 is a great opportunity to restate the collective vision we had in Paris. I think it's very important we reignite the vision and the passion we had for collective action."

Editor's note: This article was updated with new comments from the White House at 6:07 p.m. ET on Saturday.