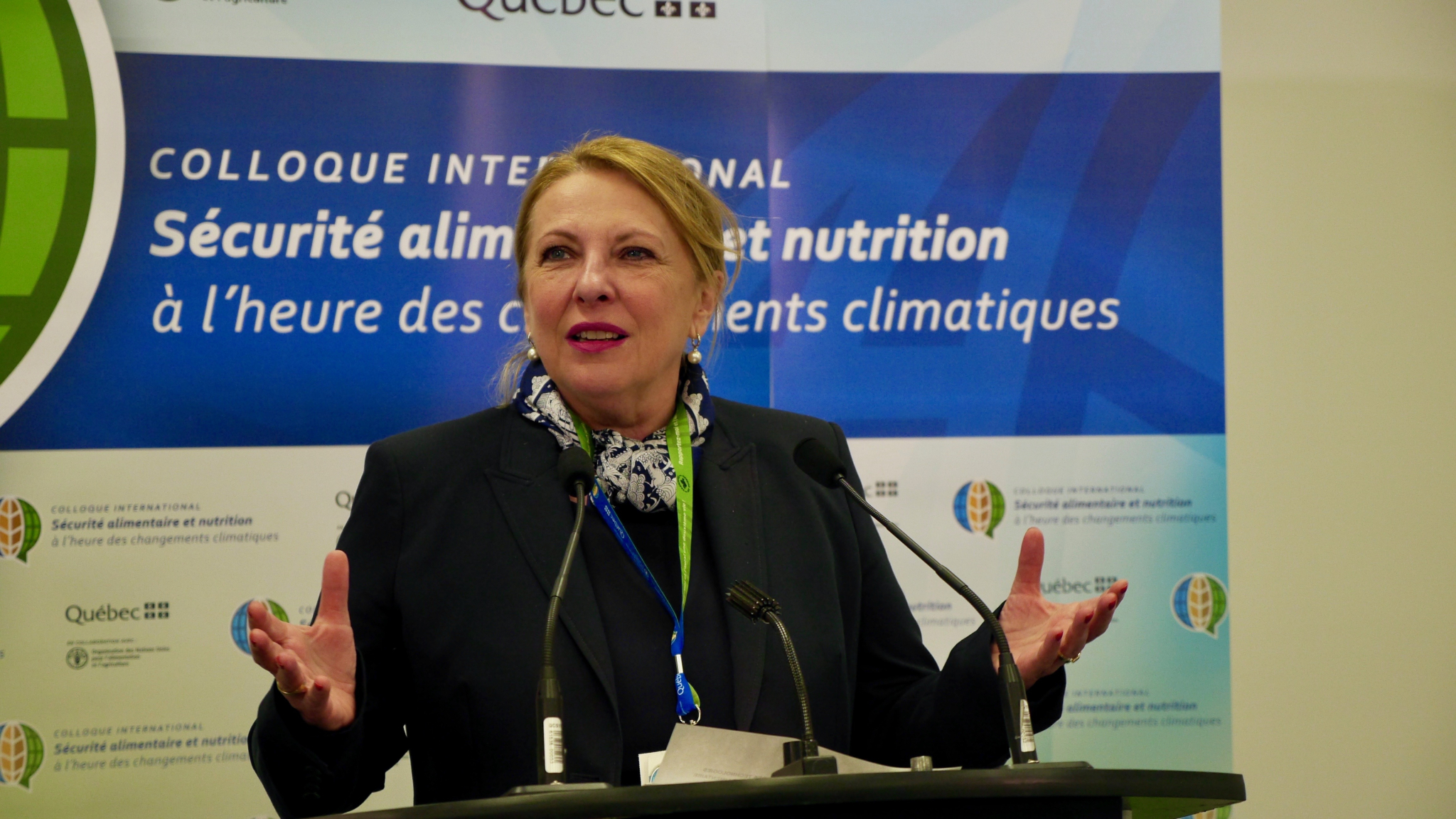 Quebec International Relations Minister Christine St-Pierre called for new funding for clean agricultural projects in the province at an international conference in Quebec City on Sept. 26, 2017. Photo by Clothilde
Previous story
Next story

The Quebec government is defending its environmental credentials after making back-to-back announcements this week that appeared to contradict its climate change goals.

A day after Quebec Premier Philippe Couillard inaugurated the most polluting factory in the province, two of his cabinet ministers defended the government's support for the facility and also announced plans to spend millions of dollars on other projects to reduce heat-trapping greenhouse gas emissions.

The new spending plans were unveiled at an international conference on food security and climate change in Quebec City.

They followed Couillard's announcement on Monday in eastern Quebec. The premier was at the opening of a cement factory in the town of Port-Daniel-Gascons in the Gaspé region. The facility's operations would generate an estimated 2.2 million tons of cement and 1.76 million tons of greenhouse gas emissions every year.

Despite opposition from environmental activists for several years, the province never asked its independent environmental hearings board — the Bureau d'audiences publiques sur l'environnement — to assess the Ciment McInnis cement factory and its impacts.

Quebec has committed to reducing its greenhouse gas emission by 20 per cent by 2020 compared to its 1990 level. The province has also set emissions targets for companies and created a carbon market, to be linked with Ontario and California. This market would allow companies to meet their targets by buying credits from others that reduce emissions with the prices linked to the supply and demand.

Adding to the controversy is a total of $350 million lent by the Parti Québecois Marois government in 2014 to Ciment McInnis through its investment branch, Investissement Québec.

The Liberal government pursued the project and has defended the loan, denying that it was a subsidy while noting that it would create 400 jobs.

On Tuesday in Quebec City, two Montreal-area ministers — Economy, Science and Innovation Minister Dominique Anglade and International Relations Minister Christine St-Pierre announced that the government was setting aside $12.5 million in investments for new clean technology projects in the agricultural and agrifood sector, a key source of rising greenhouse gases around the world.

The money would be taken from the province's dedicated green fund — Fonds Verts — until 2020.

When asked by National Observer at the press conference if the endorsement of the factory was consistent with the government's climate change goals, the ministers touted advanced technologies to be deployed at the factory.

“I’d like to note that in this domain, (the cement factory) is very innovative in its fight against greenhouse gas emissions. Clearly, because (they’re making) tons of cement, it (produces) an important amount of greenhouse gas emissions,” said Anglade. "Yesterday, during our meeting with the company, they told us about the process they will put in place in the next years to reduce their carbon footprint. And the fact they have to respect the carbon market, they have an incentive to find these processes rightly so.”

Anglade added this was how the government envisioned its environmental strategy.

“We always need to find a balance but at least, in the processes used, they are the ones that are the most innovative and release the less greenhouse gas emissions in the (cement) sector,” she said.

St-Pierre also noted that the project was already in the works when the Liberals were elected in 2014.

“The project was already on the table when we got to the government and the region needs jobs… The premier also said we would meet our 2020 (GHG) targets,” she said.