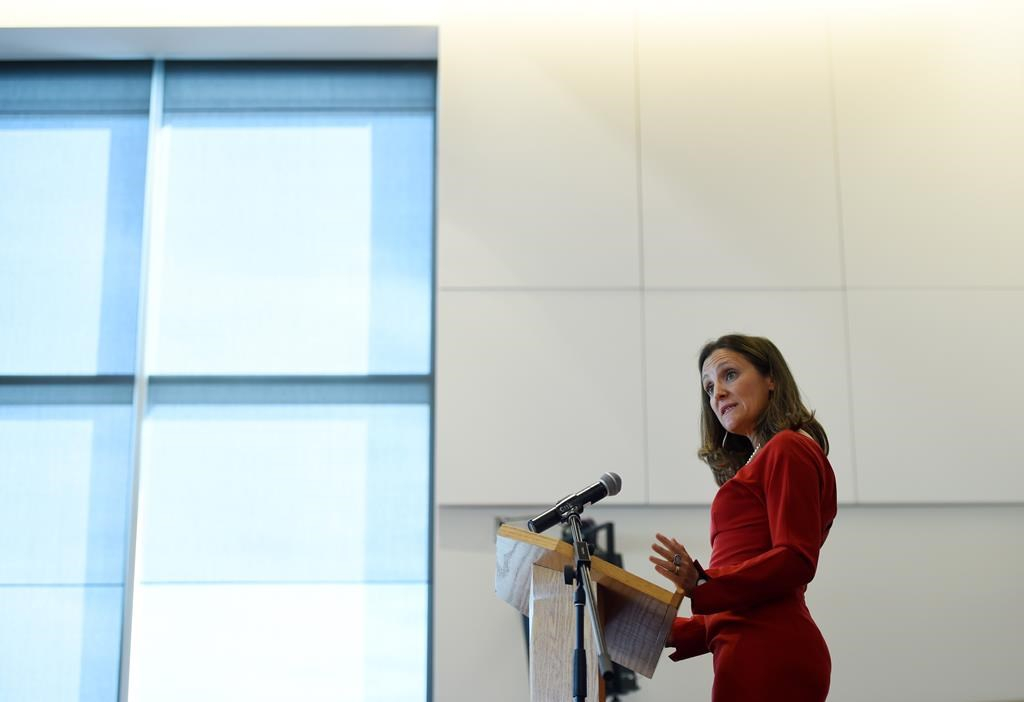 Canadian Foreign Affairs Minister Chrystia Freeland delivers a speech about NAFTA at the University of Ottawa on Aug. 14, 2017. Photo by The Canadian Press
Previous story
Next story

The Canadian government says it wants to include environment and climate provisions in a “modernized” North American Free Trade Agreement (NAFTA) but has yet to reveal any specific measures. The Americans have made public some details of the environmental measures they favor, measures that mirror those in post-NAFTA trade deals negotiated by both Liberal and Conservative governments, as well as the United States. So, where exactly does Canada stand?

One gauge of Canada's commitment to addressing environmental impacts of international trade and investment is the federal government’s actions in meeting our environmental commitments under the current NAFTA—almost none of which create binding or enforceable environmental rights or obligations.

NAFTA Chapter 11 is a stark example. In Chapter 11, Canada and its trading partners waived their sovereign immunity to give foreign investors the right to seek binding monetary penalties for violations of Chapter 11's protections of investors' interests. Despite some improvements in transparency of the arbitration process, the shroud of secrecy is still too opaque. And, Canadian taxpayers have paid handily under Chapter 11.

In the most egregious case, Canada was found liable to a New Jersey rock mining company for relying on the Canadian Environmental Assessment Act to deny the company permission to build a deep water marine terminal on the Digby Neck because of impacts on the Bay of Fundy's sensitive ecosystem and on local communities. Canadians are now waiting to find out how much of the claimed US$100 million in damages we will have to pay.

Overall, 39 cases have been filed against Canada under NAFTA Chapter 11, with eight pending. Many of these cases challenge actions that Canada has taken for environmental reasons—including one pending in which a U.S. energy company seeks damages for Quebec's moratorium on shale gas fracking (including fracking under the St. Lawrence River) while further environmental review is conducted. The reasons Canada has lost cases vary, but overall Chapter 11 creates a dangerous risk of putting a chill on environmental protections across Canada.

Chapter 11, like virtually all American and Canadian post-NAFTA trade agreements, contains a hollow provision to counter the rights given to investors. Under NAFTA Article 1114 (2), Canada and its trading partners commit not to relax, waive or derogate from domestic environmental, health or safety measures in order to protect or encourage foreign investments. If they do, the only repercussion is government-to-government consultation. There is no mechanism for the public to seek action or redress.

How many consultations have Canada or its trade partners initiated under NAFTA since it took effect in 1994? Or under similar provisions in post-NAFTA agreements? Zero. Neither Canada nor Mexico sought consultations when the United States rolled back environmental laws to promote logging during the Clinton Administration, or in response to numerous environmental rollbacks during the Bush Administration. So, do not expect Canada or Mexico to raise concerns under section 1114(2) about the Trump administration's withdrawal from the Paris climate accord or planned or pending rollbacks in environmental laws and regulations on coal power pollution and other environmental issues.

Neither did Mexico nor the United States seek consultations with Canada when former Prime Minister Stephen Harper withdrew from the Kyoto Protocol or when he weakened environmental laws through omnibus budget bills, with a clear intent to protect and encourage foreign investment in major energy projects. The Trudeau Government has yet to deliver on the promised restoration of these eviscerated laws; it has approved major projects, some involving foreign investors, under those weakened laws.

Canada understandably may wish to continue encouraging foreign investment. However if Canada is to protect Canadians’ interests, a significant shift is needed in the existing balance in NAFTA and post-NAFTA agreements between the rights of investors and the public's right to strong environmental protections. Giving the public a right to challenge environmental rollbacks should be the minimum step to give meaning to the empty commitments like the one in NAFTA section 1114(2).

To promote accountability regarding the duty to effectively enforce environmental laws, the NAAEC establishes two measures: a citizen-driven accountability mechanism able to yield detailed factual reports on allegations that a NAFTA country has failed to effectively enforce its environmental law and a party-to-party dispute resolution process that can lead to monetary sanctions or to loss of NAFTA benefits.

The factual records on failed enforcement had modest impact in the CEC's early years, but the governments have so eroded the process that it is now moribund. Since 1994, the dispute resolution mechanism has never been used—either under NAAEC or under post-NAFTA agreements with similar mechanisms—despite repeated citizen submissions and other information providing clear evidence of downgraded laws and failed enforcement. Moreover, the Council has effectively stopped considering the environmental impacts of NAFTA and the governments gave up trying to adopt an agreement on transboundary environmental impact assessment after more than three years of negotiations.

Although the NAAEC has produced some positive results (mostly in its early years) and many of the initial environmental concerns about NAFTA now seem overstated, the promise that NAFTA and the NAAEC would deliver a strong North American program of improved environmental protection never materialized. Instead, the governments have retreated from that promise and delivered non-binding and unenforceable environmental provisions in post-NAFTA agreements. If the Canada-European Union Comprehensive Economic and Trade Agreement is Canada's benchmark for the renegotiated NAFTA, Canadians have good reason to fear that the fixes regarding environment and climate (which was barely an issue when NAFTA was negotiated) will fall far short of what is needed.

A last very serious concern has to do with the negotiation process. As usual, the governments have committed to keeping the negotiations confidential—with an exception, of course, for the business and industry sectors whose interests drive the national positioning of each country. Canada made an 11th hour appointment of an advisory NAFTA Council on the Environment, reporting to the minister of the environment, although negotiations are led by the minister of foreign affairs. The council includes some impressive names, but bewilderingly few with any environmental credentials. It is unclear what role this council is expected to play.

Despite vague commitments in NAFTA and NAAEC to public participation, the public so far has been denied access to negotiating texts in the NAFTA renegotiation process, including Canada's negotiating positions on the environment. Notwithstanding this information vacuum, the public is actually invited to submit useful comments on Canada's environmental assessment of the renegotiated NAFTA by October 25, 2017!

Why should Canadians believe that a revised NAFTA will finally address environmental impacts? The parties promised that the current deal will prevent any economic advantage through downgraded environmental protections. But the post-NAFTA track record puts that promise in grave doubt. Isn’t it time our government came clean on what it is actually seeking at the negotiation table?

Linda Duncan, MP for Edmonton Strathcona, is the New Democratic Party critic for the environment and climate change and former head of law and enforcement for the North American Commission for Environmental Cooperation.

Geoff Garver is an adjunct professor in interdisciplinary studies on environment and sustainability at McGill University and Concordia University, coordinator for law and governance for the Economics for the Anthropocene Partnership (e4a-net.org) and former director of submissions on enforcement matters at the Commission for Environmental Cooperation.