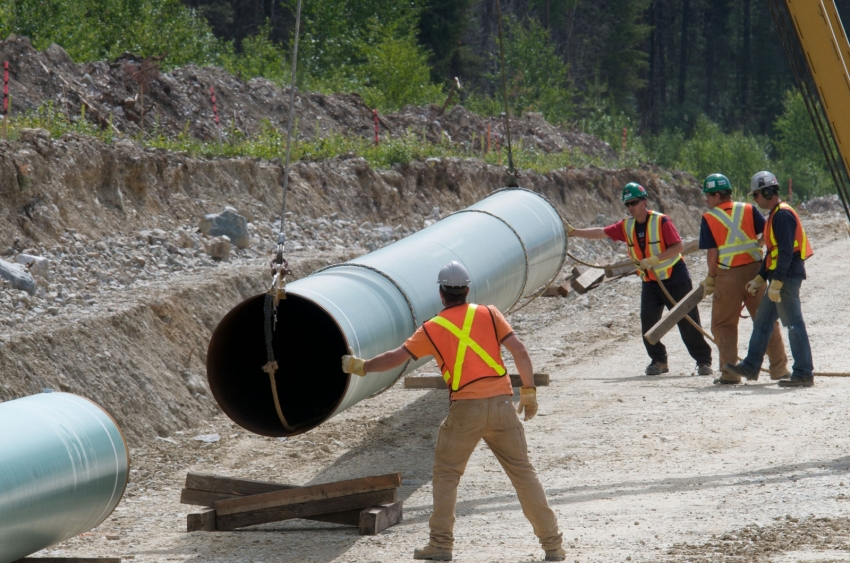 Work is done on the Kinder Morgan Trans Mountain pipeline near Jasper, Alta. in 2008. File photo by The Canadian Press
Previous story
Next story

Nervous laughter could be heard in a Vancouver courtroom Tuesday when Justice Eleanor Dawson asked the lawyer representing Kinder Morgan whether Indigenous consent had been respected during the Trans Mountain pipeline expansion approval process.

“If any First Nations said they didn’t consent to the pipeline going through their land, did Trans Mountain respect that?” Dawson asked.

The Texas-based pipeline company Kinder Morgan is in the Federal Court of Appeal to respond to a legal challenge launched by six First Nations, the cities of Vancouver and Burnaby, and two environmental groups. Some view the case as a major legal test for a project that was recommended by the National Energy Board, approved by Prime Minister Justin Trudeau's federal government, and is supported by Alberta's government.

Those behind the appeal say that First Nations were not adequately consulted, and the National Energy Board’s approval process was flawed.

Kinder Morgan Trans Mountain lawyer Killoran said she would not be addressing legal arguments in her submissions. Instead, she walked the court through the NEB's decision-making process, highlighting sections of Trans Mountain’s original application for the project and the NEB report.

To Dawson's question of Indigenous consent, Killoran mentioned the Coldwater Indian Band as an example in which the pipeline expansion route was accommodated due to a lack of consent. This, however, was the outcome of successful litigation against Trans Mountain earlier this month.

Dawson’s second interjection questioned Trans Mountain’s absence of legal arguments in their submissions and drew a link between the Kinder Morgan pipeline and the Enbridge Northern Gateway pipeline.

The Northern Gateway project was approved by former Prime Minister Stephen Harper's government, but that approval was overturned in court following a ruling that found First Nations were not adequately consulted.

The Enbridge pipeline was rejected in 2016 by the Trudeau government.

The Justice referred to arguments made last week in court when she said, "one of the applicants makes the point that the NEB was far more proactive with the (Enbridge) Northern Gateway" pipeline when it came to spill protection and marine impacts of shipping vessels. By including these aspects, Northern Gateway chose to exceed its legal commitment past the standard that was mandatory, she said.

In reply, Killoran stated, “Trans Mountain in this case did exactly the same thing. We were voluntary to comply with all these recommendations.”

In other words, Enbridge took responsibility for what could happen to tankers off British Columbia's coast in its assessment of potential environmental impacts.

Comparing the words "related" and "incidental," Dawson pointed out Trans Mountain is “relying in part on its inability to impose conditions and control third party tankers,” as reasoning for not taking responsibility for the impact of oil tankers on southern resident killer whale populations. The potential impact on killer whales was among the central arguments raised by Raincoast and Living Oceans Society last week in court.

Dawson, finishing her long interjection, commented: “That sounded more like a soliloquy.”

“That sounds like you’re doing my work for me,” Killoran responded.

If built, the expansion would triple the capacity of the existing Trans Mountain pipeline, allowing it to transport up to 890,000 barrels of petroleum products including diluted bitumen per day from Alberta to Burnaby, B.C.

The fact that KM partnered

The fact that KM partnered with other oil companies to form WCMRC -a marine oil spill clean up corporation is an indication of their wager that some of that dilbit will need cleaning up. Otherwise why invest, right? And, the fact that that damn stuff sinks is even more reason to get in the cover up - I mean clean up business.

Sounds like Justice Dawson gets it...here's hoping she quashes this insane project!