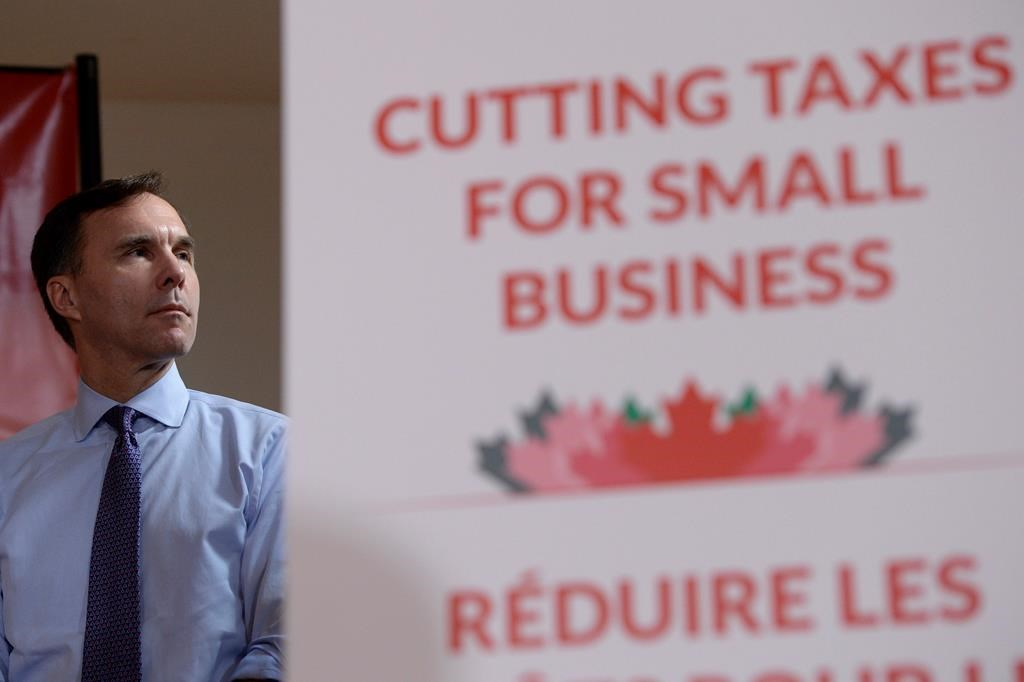 Finance Minister Bill Morneau looks on at a press conference on tax reforms in Stouffville, Ont., on Monday, October 16, 2017. Photo by The Canadian Press/Nathan Denette
Previous story
Next story

Indeed, the controversy has morphed into a test of credibility for Morneau, Trudeau's most important minister, the architect of the Liberals' economic agenda and the chief salesman for the tax reforms.

At a news conference to announce that the government will belatedly honour its promise to cut the small business tax rate to nine per cent, reporters asked as many questions about why Morneau hasn't put his substantial assets in a blind trust as they did about the tax measures.

"You have to ask a question of me first because you get a chance to talk to the prime minister," Trudeau told one reporter before finally allowing Morneau to explain that he has followed "to the letter" the recommendations of ethics commissioner Mary Dawson for dealing with his assets and avoiding any conflict of interest.

"Certainly many Canadians are," Cullen said.

"The rollout of this small business tax plan has been so badly botched, I think we'd agree that both the message saying to many small business owners you're tax cheats and also the messenger in this case — somebody who is so inherently conflicted, and I'd suggest maybe legally conflicted — is causing a lot of problems for both the prime minister, his Liberal caucus and for this finance (minister)."

In the House of Commons, opposition parties zeroed in on the lack of a blind trust, plus last week's revelation that Morneau failed to disclose a private company that owns a family villa in France, to cast further doubt on his credibility.

Conservative MP Peter Kent said "this extremely wealthy minister" seems to believe "he is above conflict of interest and ethics reporting rules." His party's House leader, Candice Bergen, went even further, accusing the finance minister of becoming "so arrogant and so entitled that he actually thinks he is above the law."

"He forgot that cutting small business taxes was a promise that he ran on, he forgot he owned a luxury villa in France, but, hey, what middle-class Canadian hasn't? He also forgot to tell us that his vast wealth was not, in fact, in a blind trust and he only comes clean when he is in a world of trouble."

As for the reviving the promise to cut the small business tax rate, which Morneau shelved in his first budget, Cullen dismissed that as damage control in the face of the angry backlash that greeted the small business tax reform proposals from doctors, lawyers, accountants, shop keepers, premiers and even some Liberal backbenchers.

"When Liberals have totally screwed up a small business tax plan, when they have attacked small businesses while ignoring their wealthy friends, when they are backed so deep into a corner they have nowhere else to go, then and only then will Liberals honour their commitments to Canadians."

Opposition MPs also kept up a barrage of questions about a now-withdrawn Canada Revenue Agency notice that employee discounts will henceforth be considered taxable benefits. While Morneau was not involved in that fiasco and the government has insisted it has no plans to tax the discounts given to retail sector workers, ongoing confusion over what other discounts might be taxable gave opposition parties more ammunition to question the credibility of the government as a whole and its claim to be a champion of the middle class.

Business groups, who've bitterly denounced the tax reform plans, were more charitable about Monday's partial climb-down, welcoming the reduction in the small business tax rate and the promise of changes to the proposed reforms to be unveiled later in the week.

"It's certainly an awful lot better than it was only a few short hours ago," said Dan Kelly, president of the Canadian Federation of Independent Business.

"We really need to make sure that what the government's intentions are is actually the case when we study the proposals in detail," he said.

"There's no question it took a knock, it did affect the trust the business community has with government and with the ministry of finance, and it's going to take a little bit of time for that to come back. But I think it can come back if the government is sincere and taking some new approaches."

Perrin Beatty, president of the Canadian Chamber of Commerce, said the government appears to be doing "a dance of the seven veils" with its changes to the tax reform proposals and it's not until all the details are known that its impact can be judged.

"At this point, everybody's from Missouri. They want to see something that's concrete," he said.

Beatty said part of the problem with the original proposals was that the government understated the impact, essentially telling business people, "'Don't worry, be happy' and what we heard from all the tax practitioners across the country was, 'Worry.'"