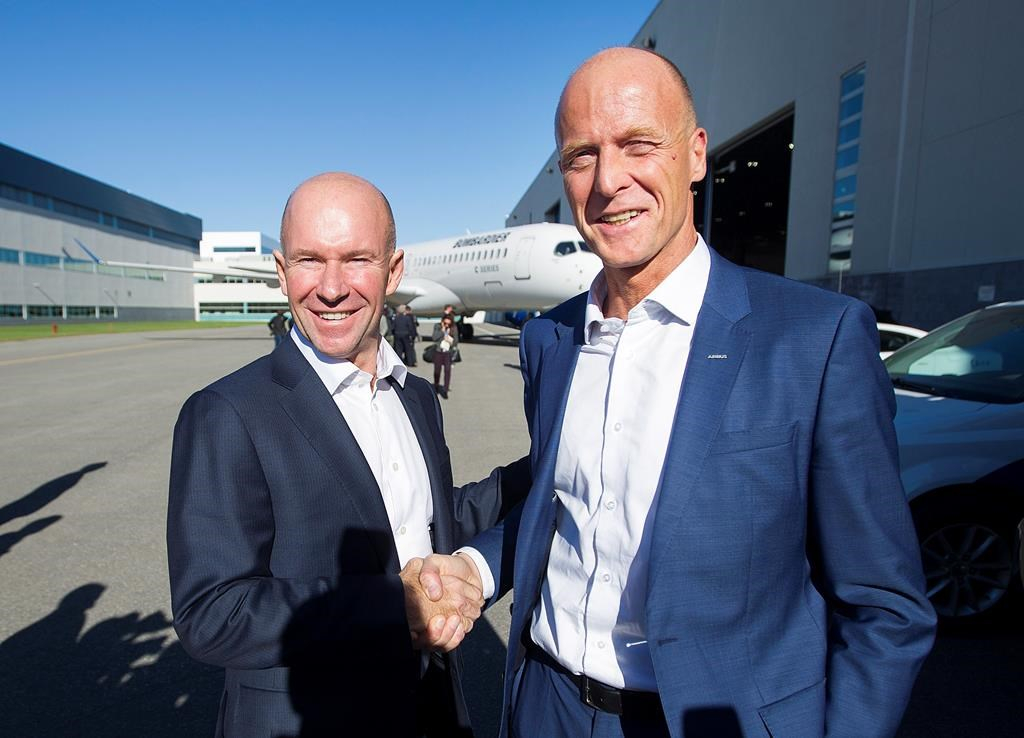 Bombardier's strategic C Series partnership with Airbus should put it on stronger financial footing but it remains unclear what fate awaits its other commercial aircraft.

The Montreal-based transportation company remains burdened by more than US$9 billion of debt and wants to regain its leading position in the high-margin business jet market.

That starts with completing the Global 7000 next year followed by the Global 8000 aircraft. A complete overhaul of the Challenger 650 is seen as the next big investment.

So where does that leave the Q400 turboprop and aging CRJ regional jets?

He doesn't foresee the company coming up with a new CRJ design, but it may choose to add new engines to make the plane more competitive with Embraer's new E2 jets.

"I don't think that I'm expecting the program to fall apart... but at the same time I'm not expecting there to be this massive resurgence of regional jet orders or turbprop orders," he said in an interview.

Bombardier (TSX:BBD.B) said it's committed to the Q400 — which recently secured its largest order, from India's Spicejet — and CRJs.

"We like these products, they give us critical mass," CEO Alain Bellemare said Friday after introducing the Airbus CEO to Montreal's business leaders.

"I think commercial aerospace has a home in Montreal and certainly in Quebec for a very long time," he said in an interview.

However, Cromer said that it's premature to disclose what it will do to rejuvenate the planes.

"At the right time we'll talk about what the real long-term future is."

"I don't think they make a lot of money on these aircraft so ... as long as oil stays at $50 or thereabouts there's probably a very limited business case for re-engines," he said in an interview.

Vincent believes Bombardier is no longer enamoured with the low-margin parts of its commercial aerospace business and will follow its historical pattern.

"They fall in love with new technology, new markets and then after a while they kind of move along to something else and it's a pattern that leaves a lot of debris behind."

Vincent worked on strategy at Bombardier during the period in the 1990s when it shook up the global aviation market by launching small regional jets that spawned new competitors like Brazil's Embraer.

He doesn't see a lot of buyers for the regional aircraft. Airbus already owns a large stake in ATR and Boeing has shown no interest in getting into smaller planes.

U.S. scope clauses that limit the size of planes pilots can fly under their union contracts give the CRJ a five-year runway to secure orders, said Arvai.

While the Q400 is "solid," he doubts Bombardier will redesign the CRJ, which will be at the end of its life in about a decade.

"It might be a natural winding down point," he said.

Union representative Dave Chartrand said employees are concerned because of the thousands of jobs in Toronto and Montreal that depend on the two programs.

"Employees wonder and say what's the next step, where are we going from here. I wonder also, but there are too many factors for us to have an answer tomorrow morning."