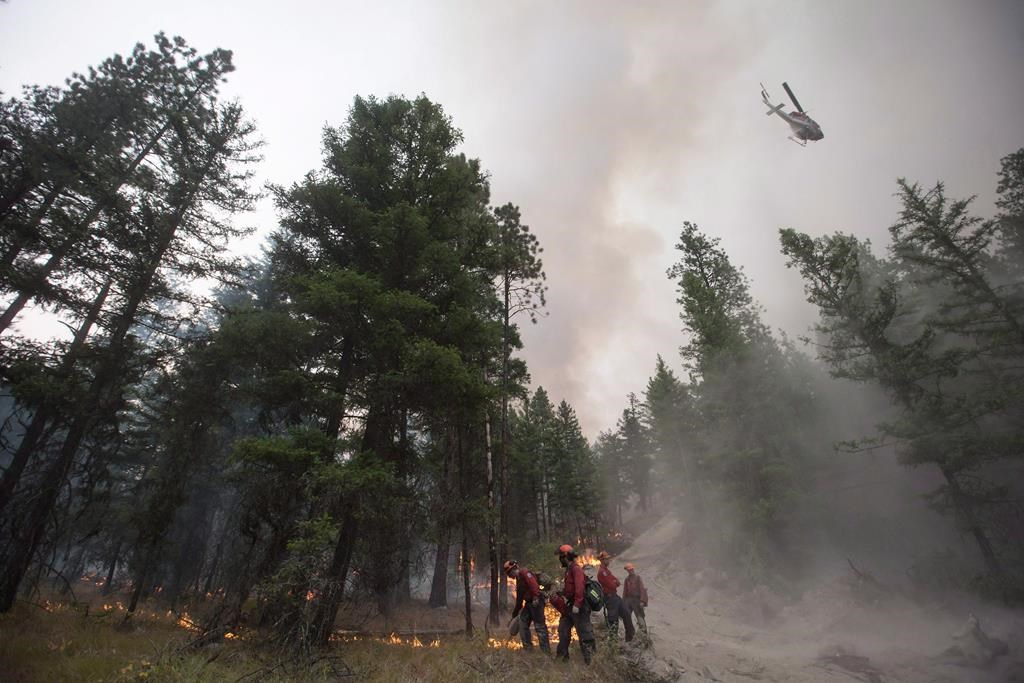 A helicopter drops water outside a fire guard line as B.C. Wildfire Service firefighters conduct a controlled burn to help prevent the Finlay Creek wildfire from spreading near Peachland, B.C., on Sept. 7, 2017. File photo by The Canadian Press
Previous story

Climate change didn't directly cause major wildfires in Alberta and British Columbia this year but it did contribute to their extreme nature, says a University of Alberta researcher.

B.C. recorded its worst-ever fire season. Wildfires that began in early April scorched just over 12,000 square kilometres of timber, bush and grassland and at their height forced 45,000 people from their homes.

Last month, Waterton Lakes National Park was evacuated after lightning sparked a blaze just inside the B.C. boundary. The flames eventually crossed into the park in southwestern Alberta.

And this last week, wind-whipped grass fires quickly spread and threatened communities in a swath stretching from the Crowsnest Pass in southwestern Alberta all the way into Saskatchewan.

The phenomenon isn't just in Western Canada, says Mike Flannigan, a professor of wildland fire at the University of Alberta. He points out fires around the world this year have been "head and shoulders above the previous record."

"There's been deadly fires and historic fires in Chile, Portugal — twice — and California," Flannigan said in an interview.

"It's been quite a devastating year globally and the California fires will be the most expensive ... (with) tens of billions in losses."

Flannigan said human-caused climate change isn't the root cause of fires, but has made them much worse. Global warming has made conditions more favourable for intense flames.

"With warmer temperatures, the fuels will be drier, and when a fire goes through, there's more fuel to consume," he said.

Fires have certainly increased in the last several decades, he said.

"The amount of fire activity in Canada, which currently is about 2 1/2 million hectares — about half the size of Nova Scotia — has doubled since the 1970s."

The Insurance Bureau of Canada has been watching weather trends with a wary eye.

"The whole issue of climate change and the severe weather that results from it has been discussed for years ... but really in the last decade we've just seen an explosion in the incidents and the severity of these extreme weather events," said Bill Adams, the Insurance Bureau of Canada's western vice-president.

"It's really a continuation of what we've seen for many years where the traditional weather patterns that we've grown up with ... we can't rely on them any longer."

Adams said disasters in Alberta have accounted for about 70 per cent of all claims paid out in the last eight years. Fires, floods and hail account for most.

"There's no question that Alberta has been the epicentre in the Canadian context of the majority of the severe weather events in the last number of years."

Waterton forest will renew after wildfire, but it will take decades: Experts

Why do you not point to the

Why do you not point to the SPECIFIC factors at work in climate change affecting Canada. This spring it was revealed that the CONSTANCY of the temperature/precipitation changes over several months is a product of a shifting jet stream.

INVITE the reader to bring up the jet stream when observing other factors daily. SEE for themselves what's at work because of a warming PACIFIC. Why EUROPE is in for changes from changes over the north Atlantic. ETC.

Mike Flanagan is not about to stick his neck out in Alberta.

Mr. Flanagan ha participated in many studies regarding the effects of climate change on Canada's forests. You can read an extensive study, "Anticipating the Consequences of Climate Change for Canada's Boreal Forest Ecosystems", in which Mr. Flanagan and fifteen other scientists participated. It was published by the NRC Research Press, October 09, 2013. In its conclusion, the study makes an important statement about the danger related to permafrost thawing.
" A major concern must be that some 40% of the present-day boreal forest area overlays permafrost. These ecosystems are particularly vulnerable to permafrost degradation, which is already widespread and expected to expand rapidly in response to warming trends that have already begun (and which will continue regardless of any immediate global efforts to mitigate GHG emissions). The process of degradation will occur on a vast scale, causing the release of even more GHGs, for a period lasting well into the 22nd century."
Another major concern is the effect of wildfires on peatland ecosystems around the world. It is estimated that peatland ecosystems store around 30% of the world's terrestrial carbon, but about 64% of the estimated total global boreal forest carbon stock. 13% of Canada's land area is made up of peatlands. Most Canadian peatlands occur in the Boreal Peatland Region (64%) and Subarctic Peatland Region (33%). 59% of all stored carbon in Canada in contained in these peatlands.
The combined Boreal and Subarctic regions contain 97% (142.94 billion tonnes) of the soil organic carbon mass occurring in Canadian peatlands. The peatland sensitivity model indicates that approximately 52% (74.16 billion tonnes) of the organic carbon mass in these two regions will be severely to extremely severely affected by climate change.
(source: Charles Tarnocai, Agriculture & Agri-Food Canada, May 2009: " The Impact of Climate Change on Canadian Peatlands")
This is quite alarming. This is probably why the press and government officials don't want to talk about it. The federal government don't even take into account GHG emissions related to "natural disturbances" (e.g. wildfires, insect infestations, permafrost thawing, drought, deforestation, etc.) in its annual report on GHG emissions. It has officially declared in its biennial report to the UNFCCC that emissions from "natural disturbances" where not related to human activities, including climate change.

In 2015, the total forest area burned in Canada was 3,903,276 hectares while the 10-year average for all provinces and territories and national parks was 2,401,481 hectares.
During the 2004-2014 period, emissions from forest fires in Canada's managed forests (2/3 of Canada's forests) and forest products sector went from a net "carbon sink" of -41.6 million tonnes of carbon dioxide equivalent (CO2 eq) to a net "carbon source" of 78.3 Mt (CO2 eq) in 2004. For the ten year period, GHG emissions totalled 329 Mt (CO2 eq) compared to removals of 115 Mt (CO2 eq).
(source: www.nrcan.gc.ca/forests/report/disturbance/16552)
"For the past century, Canada's managed forests have been a significant carbon sink, steadily adding carbon to that already stored. In recent decades, however, the situation has reversed in some years: Canada's forests have become carbon sources, releasing more carbon into the atmosphere than they are accumulating in any given year."
(source: www.nrcan.gc.ca/forests/climate-change/forest-carbon/13085)
During the Kyoto protocol negotiations, the large carbon sink in northern land surfaces inferred from global carbon cycle models were viewed as an option for northern countries to use to offset fuel emissions by claiming sinks in their managed forests. As emissions from forest fires were increasing, Canada, along with a number of other countries, decided in a spring 2012 submission to the UNFCCC that emissions and removals resulting from "natural disturbances" would be excluded from Canada's GHG emissions biennial report to the UNFCCC. The present federal government has adopted the same policy.