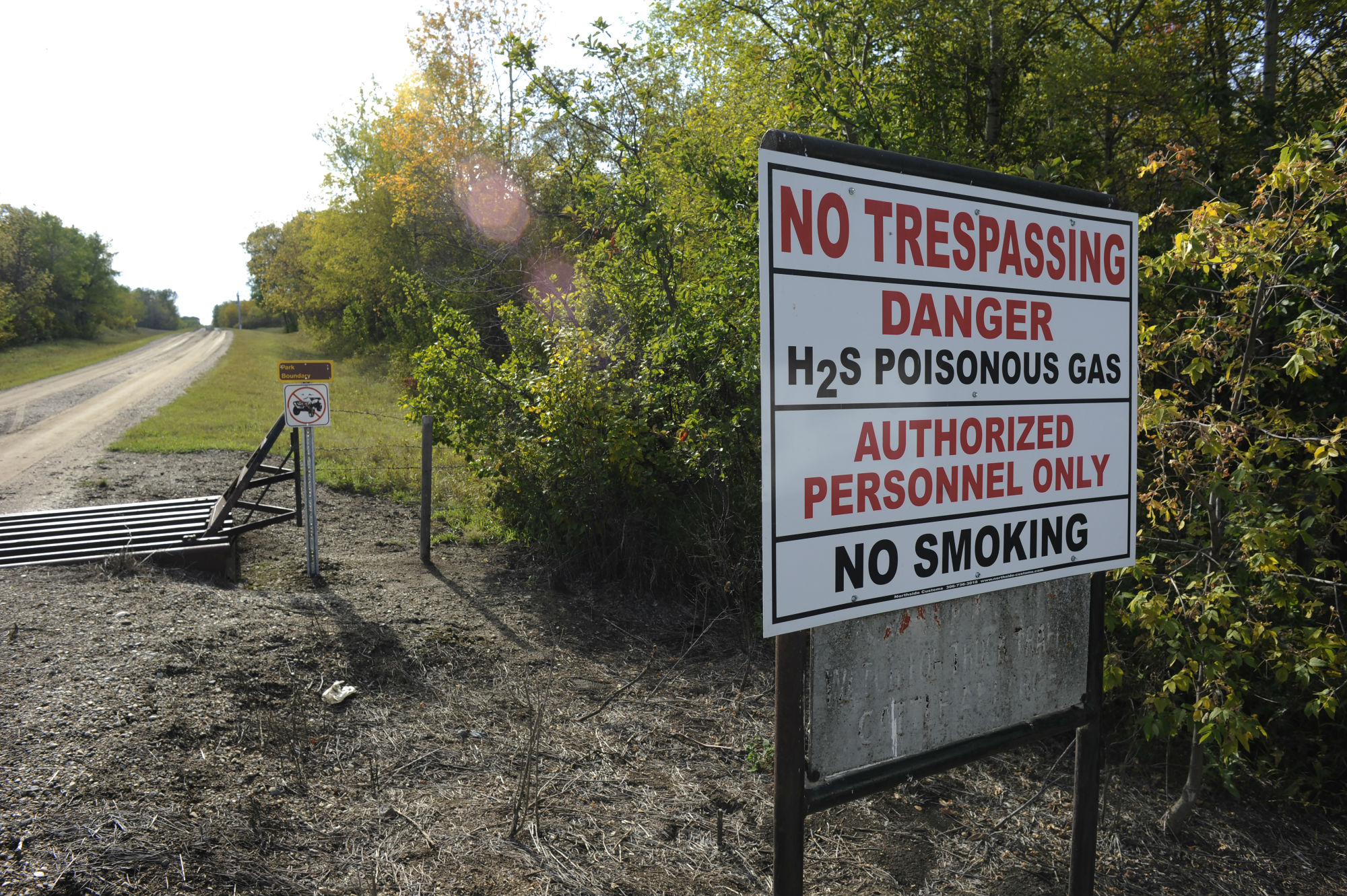 A sign warns of the dangers lurking in southeastern Saskatchewan's oilfields. File photo by Mark Taylor
Previous story
Next story

Over the past year, 34 students at four Canadian journalism schools — Concordia, Ryerson, Regina and the University of British Columbia — joined together with senior journalists at three national news organizations — the Toronto Star, Global News and the National Observer — in an unprecedented reporting collaboration.

Together, we have been exploring the impact of the oil industry on rural communities in Saskatchewan and Ontario, the financial underpinnings of political decisions affecting the industry and whether governments responsible for monitoring serious health risks to residents and industry workers have acted in the public interest.

With the assistance of The Michener Awards Foundation and the Corporate Mapping Project, more than 50 journalists and editors pored through thousands of documents, analyzed terabytes of data, interviewed countless experts and created an investigative series of vital public interest that is entirely unique in scope and scale in this country.

In our first articles and broadcasts, which appeared Oct. 1, we reported on the contents of hundreds of internal government and industry documents never before seen that reveal industry and provincial government officials in Saskatchewan were aware of significant public safety hazards from potentially deadly hydrogen sulphide (H2S) gas since 2012.

For years, amid troubling emission data and oil facility failures, they debated whether to share this information with the public.

In the end, it was not shared.

Until we published it.

Our reporting uncovered ongoing public complaints about H2S emissions in the province that have sickened and hospitalized residents with no public warnings, fines or prosecutions.

A second set of stories focused on the health effects of oil and gas production in Sarnia, Ont. and a troubling pattern of secrecy around potentially toxic spills and leaks from industrial facilities that sit across the street from residential homes and parks.

The Price of Oil is the largest national journalism collaboration in Canadian history. Video by University of Regina journalism school

For more than a decade, residents of Sarnia and the nearby Aamjiwnaang First Nation had been asking the provincial and federal governments to fund an independent study on the health effects of air pollution in the area.

Until we published these stories.

Forty-eight hours later, the province’s environment minister announced funding for an independent health study along with “stricter” regulations for industry.

A project that spans the country

This journalism project has spanned the country and addressed the reporting challenges presented by Canada’s vast geography and regional divisions.

It has built bridges between classrooms and newsrooms, addressed the shrinking resources of mainstream media organizations that have undermined so much ambitious investigative work, held governments and industry to account and, most importantly, presented Canadians with significant new information and triggered positive change.

We are proud of this work. But we are aware that it may never happen again. There simply isn’t enough support for it in Canada.

Journalism’s brutal economic realities have given birth to a vibrant non-profit investigative model in the United States where collaborative investigative teams in every state are now doing groundbreaking public interest reporting with deep financial support.

The reality in Canada is much different.

There is no philanthropic equivalency here when it comes to investigative journalism. The charitable sector is smaller. And even within it, public interest journalism is not on the radar.

The work by our faculty members on this project and forthcoming portions of the ongoing series required hundreds of hours of volunteer work outside the parameters of our jobs.

It was a passion — an attempt to prove the merits of a model that could bring under-reported stories to the public while supporting shrinking newsrooms, training the next generation of investigative reporters and shining light where it is most needed.

We think we did that. But it is not sustainable. Making it so has proven challenging.

Fellow journalist Patti Sonntag and I have been developing the infrastructure for a national network of professional and student journalists that would publish an annual national investigation on a matter of pressing importance, known as the National Student Investigative Reporting Network, or NSIRN.

This is a blueprint for a new investigative journalism model in Canada, as demonstrated by our ongoing work.

We believe we have the skills and tools that we need to carry out the public interest mandate. We have proof of concept.

But we still don’t have a funding base.

We are calling on Canadian educational institutions, the federal and provincial governments and on our readers to support NSIRN and other efforts like it.

Even as our year-long investigation was about to publish earlier this month, more disheartening evidence about the sustainability of ambitious, independent reporting arrived.

Heritage Minister Mélanie Joly made it clear that while journalism is “critical” to democracy, no federal support would be forthcoming for the economically battered business of original reporting.

We believe our model, bringing together traditional media outlets with journalism schools and academics in the collaborative pursuit of vital public interest information, is a uniquely Canadian solution to a uniquely Canadian problem, drawing on one of our greatest assets: Our ability to get along in the interests of the collective.

We need support to carry out the watchdog function that we, and journalists like us, want to serve.

This article was originally published in The Conversation.

I would suggest that a couple

I would suggest that a couple more investigative projects be funded using the Crowdfund model before coming out with a network infrastructure to ensure its continuity. I firmly believe that "vital" public interests can be served only when and if the general public acknowledge and recognize it as part of their priorities. Anything short of that will remain partisan and becomes reactionary in the long-run.

Real Journalism = an informed citizenry, an essential foundation necessary for democracy. The fourth estate.....is there hope for the endurance of the lessons of the Enlightenment in the public domain? Thanks guys.